Simon Bornhoft joins Boards for the next instalment of Basics, this time covering the gybe.

Gybing is a downwind turn where the rig is swung over the nose whilst the body remains at the back of the board. In lighter winds it’s a relatively simple turn, but in stronger winds it becomes a fast, dynamic and really exciting move. Like all transitions, it’s down to good vision and maintaining a counter balance with the rig before during and after the rig is released and rotated over the nose. Developing the right technique in lighter winds will give you the skills and confidence to master faster and faster turns in stronger winds. Carving a turn on a small board feels incredible and well worth the effort to learn it!

High-speed turns are called a carve gybes, but because you’ll be learning in lighter winds at a slower speeds, the first gybe you’ll learn is a non-planing carve gybe (NPCG). These uses the core principles, foot movement and rig rotations skills that can later be transferred into stronger wind planing gybes.

GET THE BASICS RIGHT FIRST

So use this LOOK, LEAN AND LEVER mantra.

LOOK where you want to go!

LEAN where you want to go!

LEVER the rig in the opposite direction to counter balance!

Adopt a wide foot and hand spread. Use your downwind steering skills to turn the board by twisting the rig forward with an extended front arm and flexing the rear arm, keeping the body low over the back foot on the inside rail.

As the board turns downwind, the mast/rig is levered forward and out of the turn as the body looks and leans back and into the turn. This whole process is made so much easier if you focus on one key skill and that’s keeping the rear/clew hand pulled in close to your head. Pulling in and down on the rear hand, locks the rig in place, encourages the board to turn and counter balances against the mast that’s leant out of the turn.

TOP TIP: Before the foot change and before the rig rotation, try to keep the whole rig at roughly 90 degrees to the board.

As the board faces dead downwind, look where you want to go and pull down on the boom. Keep the shoulders back and continue leaning sideways into the turn as the mast is leant out of the turn. Keep the shoulders back as you bring the front foot back to switch the feet round. Before, during and after the foot switch, keep pulling that clew hand in and down towards your head and keep the rig at 90 degrees to the board. Always re-adopt a wide spread on your feet to help steer the board and prepare for the rig rotation.

Slide the front hand up to the mast and look where you want to go. Release the rear hand and try to keep the mast forward as the boom swings over the nose. Extend the mast hand to keep the rig away from the body as the old backhand passes under the boom to grab the new side of the boom and draw the rig forward.

After collecting the rig, drawn it forward with the new front arm, sinking down and back into that ‘drop and push’ Super 7 stance to counter balance the forward rig.

Board won’t turn? Usually down to not looking, leaning or pulling that backhand in towards the head to help lever the rig out of the turn.

If the rig falls downwind at the end, it often means the rig rotation was too late, you broke at the waist, looked at the sail or were too far into wind when releasing the rig.

If the rig won’t swing over the nose or the mast comes in towards the body, it often means that clew hand wasn’t pulled in tight enough or the sail was rotated too early.

Look where you want to go.

Lean the rig forward and out of the turn as the body stays back and leans into the turn.

Extend the front arm and pull in and down on the clew hand just before, during and after changing the feet.

Keep the rig at 90 degrees to the board and rotate it on a board reach.

Drop low, use an under arm movement to grab the boom on the new side and low out of that turn!

So that’s tacking and gybing sorted, how about we learn to sail faster in the harness and footstraps!

A great skill to practice the end of a gybe is a clew first beachstart. Start on a broad reach, keep the rig at 90 degrees to the board and pull in and down on the boom with the clew hand.

It’s really worth setting a board up on the beach to practice the foot and rig work for tacks and gybes. 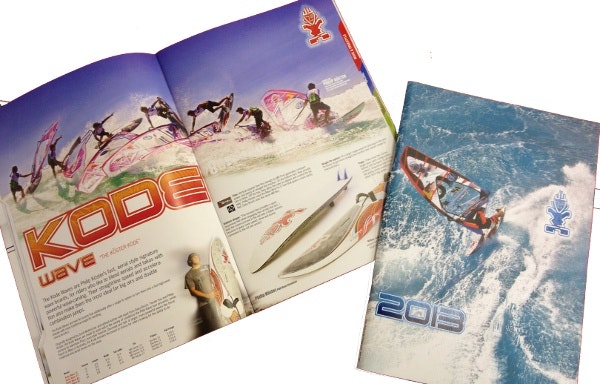 Starboard UK distributor Tushingham Sails have just taken receipt of the new Starboard Windsurfing and SUP brochures for 2013 and are offering to post these... 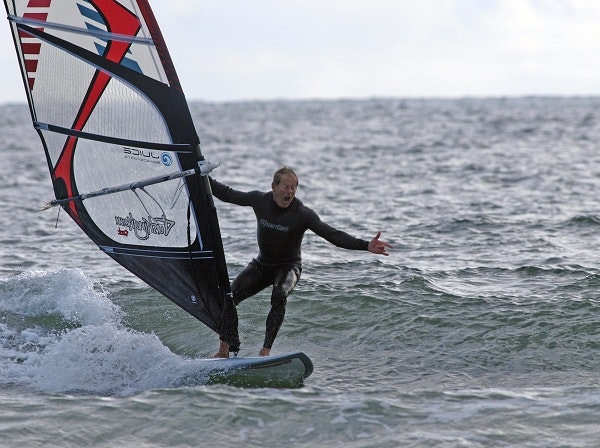 Tushingham/Staboard team rider Peter Hart, the original technique guru has just returned from four consecutive weeks of wave clinics in Donegal and Tiree, where over...

Starboard UK distributor Tushingham Sails have just taken receipt of the new Starboard Windsurfing and SUP brochures for 2013 and are offering to post these...

Tushingham/Staboard team rider Peter Hart, the original technique guru has just returned from four consecutive weeks of wave clinics in Donegal and Tiree, where over...

Check out Turkey with Starboard Dream Team riders Çağla Kubat and Jimmy Diaz through the beauty of Alaçati, truly a windsurfers paradise. The second of... Could You be the King or Queen of the Wind?

Ollie Acton became the SWA 2012 North Fanatic Freestyle Champion and was runner up in the 2011 UKWA freestyle tour, and has now entered the...

Could You be the King or Queen of the Wind?