This month’s test comes courtesy of the OTC team, who take a look at the freeride boards their centre stocks in the 110-118L (65-69cm) range, both from the point of view of the guests who use them, and the findings of their own experienced pro test team.

Versatile is a word more traditionally applied to, say, 100L crossovers, or perhaps 85L freestyle-waves. But versatility comes in many different forms, and actually, when you consider the spectrum of usage and the number of different ability levels relevant to the 115L size, it stands head and shoulders above the rest. From the ‘first time shortboarder’ and gybe trainer up to the experienced rider looking for a user-friendly blasting platform, there is something for everyone in this size, making it an incredibly important inclusion in every brand’s freeride range. So let’s start with a closer look at some of these target audiences.

For light to medium weight riders (<75kg), a board of 65-68cm can be the ideal tool to really get to grips with stronger wind sailing, being small enough to feel exciting, fast and manoeuvrable, yet offering enough stability and comfort to venture out into planing conditions confidently for the first time. The roots of these boards can be traced back to the late 1980s and seminal designs such as the BiC Astro Rock. This was a massive hit with first time shortboarders due to its excellent stability for those first hesitant sessions, along with the reassurance that if the waterstart practice wasn’t going according to plan, you could simply uphaul and get home. The concept of the ‘first time shortboarder’ is rather redundant now, since all boards are short. However, there’s still a learning curve to be moved along, as higher-performance boards become progressively less stable and more sinky underfoot, and the modern 115L is the perfect gateway to modern high performance sailing. 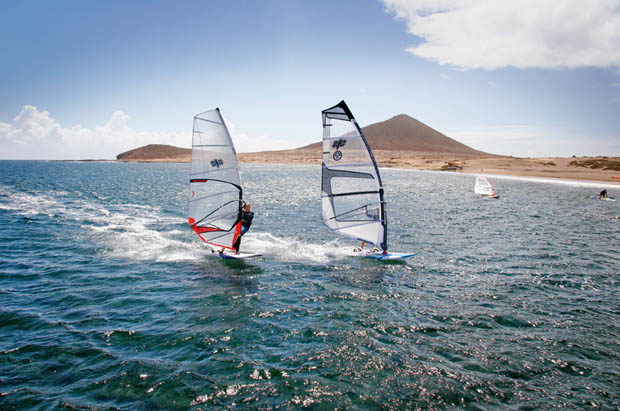 It also works equally well for attaining the second level of high wind mastery; the gybe trainer. For those who’ve cracked the harness and footstraps, mastered the planing stance and feel comfortable while cruising at speed, the next stage is turning around. Carving a board is where the fun really begins. Some master the gybe in a flash, while others seem to make it their mission in life. The truth is the gybe never gets boring – each one is different from the last, and there are so many variables to consider each time; your entry speed, water state, radius of the arc, etc. However, there is a fundamental paradox in carve gybing, in that it’s actually easier on small boards (because they turn more readily, requiring less actual physical effort from the rider), but the smaller the board the quicker it is to punish your mistakes. So, trying to master the gybe on either too big or too small a board can be a mistake. And again, the 115L board is pretty much perfectly positioned as the best overall compromise size.

Not all of them though! The boards here offer a great cross-section of the variety that is available. Some go round corners as if on rails, while others have to be continually coaxed and persuaded to hold their bite. Nevertheless, whether you’re a novice carver or a seasoned professional, there are boards here to suit and captivate.

This is another area where these boards have a great deal to offer, although whether they’re the very best option is more open to question. Can one of these boards really satisfy the blasting desires of the more experienced rider? As the BOARDS Test Team said in their recent Freeride, Freerace or Slalom? test, there are more racy / performance-oriented options available in the freerace and slalom classes, which will better suit many advanced sailors. Nevertheless, the freeride board is still an extremely viable option for straight-line blasting, especially if it’s for typical coastal conditions. Some of these boards are no slouches, and partnered with an efficient sail can offer a good fight against their more dedicated rivals. But where they really shine through is in the control and comfort they offer, which counts for a lot when the chips are down and the conditions become more severe.

To summarise then, the 115L board really rules for the first-timer coming down to this size, for the slightly more advanced intermediate now looking to take their freeriding skills a stage further and really master the gybe, and for the fairly experienced freerider looking for a general blasting platform (particularly with bigger sails) for a wide range of coastal conditions. In other words, there’s probably a board here for a wide cross-section of our readership!

For the entry / novice shortboarder, the Exocet Cross has the width, stability and cruisy character to help master planing conditions in a flash. It’s also a great carving platform, particularly for the heavier sailor.

Those that want to really develop their carving repertoire can’t go far wrong with the manoeuvre-oriented RRD Freestyle Wave 115 or Naish Global Freeride. Both turn supremely well, and would help someone progress naturally into more expressive transition sailing such as freestyle or wavesailing. For easy plug-&-play freeride performance, the JP X-Cite Ride is a star contender. It requires very little input from the rider, but delivers the feedback for a fun and captivating ride, making easy work of most sea states.

For early planing and marginal wind performance, the Mistral Screamer still comes out on top, as it did last year, such is its efficiency and pointing prowess. A real gem of a board on flat water, it covers distance in comfort and style.

If you want to push your boundaries further, there are three boards that leap out. The Exocet S-Cross is comfortable and well-mannered, yet thrives on having the power of an efficient sail pushed through it for a committed straight-line performance. As close to a freerace board as any here, it does require input and a more commanding role of the rider, which more experienced riders may well appreciate. But when the chips are down and the conditions get severe, our favourite high-wind blaster is the Mistral Syncro; a delight to use in harsh chop and our first choice for a downwind drag race. The Starboard Futura, on the other hand, displays a simply staggering wind range and is capable of mixing it against the Screamer in marginal conditions and the Syncro at the top end. It’s not the most naturally effortless performer like the X-Cite, but nor is it demanding. Happy just cruising around, it’s that freeride / blasting potential underneath its skin that will endear it to the more experienced rider, intrigued to see how much more performance is there if they keep pushing. The final mention goes to the Fanatic Eagle which, despite its years, still takes top honours as the most versatile and all-round design here. Cruise around with an upright stance, or load it with a powerful sail, it will adapt to any riding style and is incredibly versatile in the turn.

While design factors such as tail width, deck dome, rail thickness and deckpads go a long way to hinting at a board’s intended use, the spread of footstrap options from the centreline to the rails is a sound indicator of intended versatility. For example, comparing the two Exocets, both the S-Cross and Cross have inboard and outboard options. However, the Cross’ strap positions are very much focused around the centreline, whereas the S-Cross’ options are both towards the rail. The Fanatic and JP take top honours with their mass of options and a wide spread between the plugs on offer. The BOARDS Test Team check out a line-up of classic ‘burn-&-turn’ freerides for everyman. Pix by Andy Jozwik… Freeride boards are the bread and butter of...

The BOARDS Test Team check out a line-up of classic ‘burn-&-turn’ freerides for everyman. Pix by Andy Jozwik… Freeride boards are the bread and butter of...