Adrian Jones and his test Clones test out the next board in the 2013 freewave test, the Tabou 3Style. 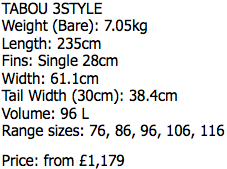 On paper, the Tabou is the biggest board in test at 96 litres. Both the max width and tail width are also both up there, beaten only marginally by the Starboard.  It’s quite a radical shape actually with a stepped tail design and quite chunky rails compared with most of the other boards.  The 3Style is designed as a single fin and is supplied with a 28cm version (one of the biggest in the group).

So far it’s all big, big, big and as soon as you step on the Tabou, nothing changes – it’s definitely the biggest feeling board underfoot and that has advantages when it comes to early planing.  There is no doubt the Tabou has the best ‘get up and go’ of this test group. There is plenty of volume and stability underfoot when wobbling and then as soon as the sail fills the fin starts to drive, the board accelerates and it’s onto the plane without any real fuss or fancy technique.

Easy to sail in a straight line, really feels like the fin is big and you are flying off the fin.

The pads are extremely comfortable, which combined with the deck shape gives a very comfortable blasting stance.  It actually feels quite like a freeride board in a straight line riding fast and free off the fin.  Upwind performance is also very good thanks for the width and fin size.  On the subject of the fin, we are little suspect about the humming noise that we kept getting from the tail of the board at speed. It might be worth trying a different fin if you encounter this issue.  It didn’t seem to affect the performance, but certainly eliminated the need for a waterproof iPod!

Easy technique to turn, but needs weight to get it to turn tightly.  Feels stiffer and less agile on a wave than the tri-fins.

At the top end, the size of the 3Style and the fact it likes to ride off the fin, made it a bit less controllable than some of the more ‘planted’ boards.  Although we reckon a smaller fin would definitely help the top end.

There is no doubt that the 3Style leans more towards blasting and gybing than wave riding compared with the other boards within this group.  It’s ok for riding on, but the sheer size and single fin configuration limit its potential.  It was definitely more suited to heavier riders on the wave face who’s weight and power could negotiate the board through the turn better.  As a novice wave riding board, it would also be fine as it holds speed well through the turn and had a reasonable back side snap to it.  It’s more the intermediate/advanced in front side riding conditions riders who will probably notice its limitations.

For freestyle the aptly named 3Style was pretty decent thanks to its speed, easy pop and stable slide.

So easy to get planing on – releases the best of all the boards and then just accelerates and has a lively, free feel still.

The 3Style scores as the best high wind freeriding board in this group.  It planes extremely early, is easy and comfortable in a straight line and has a very good top speed.  It feels like the biggest board in this group and is exceptionally good at getting planing – and then staying there.

It is more than manoeuvrable enough for all style of transitions, but does start to feel a bit less agile on the wave face, particularly for lighter and more skilled riders, and certainly when compared to the tri-fins within this group. Never-the-less it’s fairly easy going and holds speed well through the turns, so would be perfectly fine for novice wave riders. 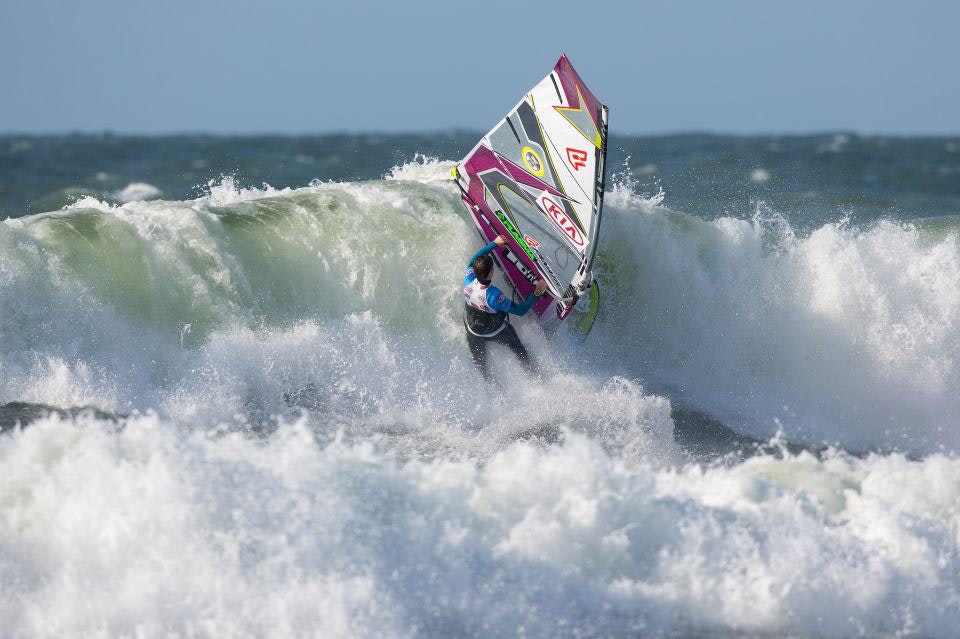 The Tabou Rocket is one of the most fun, easy to use and stone proof of all freeride boards, which the likes of Ross Williams...

The Tabou Rocket is one of the most fun, easy to use and stone proof of all freeride boards, which the likes of Ross Williams...