Alex Morales journeyed from Cuba to America… by windsurfer. This is the story of his brave journey across the ocean and to becoming a respected board shaper.

Images and words by Timothy Venn. Like many of Miami’s population, Alex Morales’s life started in the Communist dictatorship of Cuba – but his journey since has been unlike any other. Fascinated by his first sight of a windsurfer as an eight year-old boy, he knew he was bitten by the windsurfing bug that was sweeping the world. However, with no windsurfing opportunities for kids, he had to make do with sailing dinghies and begging the local windsurfers for a try on their boards.

This is when young Alex showed the first signs of his improvisational, ‘get-it-done’ attitude when he started to build his own kid’s windsurfer. “I started building Styrofoam boards and bamboo masts and booms. It was jury-rigged gear like a typical third-world kid – but it was the only gear I could get for my size.” Finally, a few years later, he was able graduate to real boards, and his dedication and persistence paid off when he won the 1987 Youth Event and was selected to be in the Cuban Olympic windsurfing team in 1989.

For many windsurfers and Cubans alike, this might have been a dream come true – being paid (albeit a modest stipend) to windsurf. However, the life of a state sponsored windsurfer had limited appeal to Alex, who was acutely aware of the artificial bubble he was living in – limited to state events with other communist countries. “You might be in the best shape – but if you don’t compete internationally, you can never be your best technically.” Word was flooding in from the US and Europe through windsurfing magazines, TV and radio of the exciting developments in equipment and competitions. “My biggest influence back then was the windsurfing magazines that made windsurfing look so colorful and hardcore.”

Alex knew what he had to do – but leaving Cuba freely was not an option, so he plotted his departure with the only option left – as a ‘Balsero’, making the 90 mile journey to Florida and freedom by raft. Even as an expert windsurfer, he realized that windsurfing to Florida would be physically exhausting and dangerous, so he tried leaving twice with home-made rafts powered by outboard engines. After both attempts failed, he finally turned to his last and least favored option – by windsurfer. “The windsurfing option was always in the back of my mind, but I knew that it would be exhausting – perhaps beyond my limits.”

In order for this highly risky enterprise to succeed he knew it would take some luck and careful planning, so over the next 18 months he studied the weather, the ocean conditions and currents to figure out the optimal time of year to make his attempt. April 25th 1994 was picked for the consistent east winds, ocean current and moderate weather. Making precise calculations of the wind speed and currents, they set their heading to hit the Florida peninsula precisely in the center of the Florida Keys – avoiding the potentially fatal mistake of going out too far east out into the Atlantic Ocean or west into the Gulf of Mexico. Failing to make landfall in South Florida would have meant that there would have been little chance of completing the journey before exhaustion and dehydration would have taken its toll. He also carefully selected his board – the relatively wide and floaty Bic Reggae with a retractable dagger-board that allowed him to also easily sail upwind in light winds. Added to that, a custom sail that he made out of a 7.0 and smaller wave sail gave him low end power – but would still be manageable in the gusts.

Alex and two fellow windsurfers sailed from Cuba, avoiding the Cuban Coast Guard – taking over eighteen hours to reach US coastal waters where they were picked up by the Governor of Florida’s boat that was coming back from a fishing trip. Exhausted but elated on successfully making the trip, Alex got a call from Eugene (Eugenio Roman, who windsurfed out of Cuba on a last minute whim) to go windsurfing with him in Miami that same day. Alex couldn’t believe it! “I said like “[email protected]#$ you, that’s the last thing I want to do right now! We did actually go windsurfing with him a couple of days later.”

“Windsurfing in Miami was like coming home” says Alex, “Maybe because I had so many friends and family here – I felt like Cuba had become a foreign country and Miami was where I was meant to be all my life.” However, beyond getting to Florida, Alex had no specific plans. Just being free was enough for him for that moment – but that did not mean he stayed idle and he worked hard to assimilate himself into the American culture, as well as becoming a licensed electrical contractor.

Alex’s involvement for the remainder of the 1990’s was minimal. “The US windsurfing media and industry became focused on wave sailing in the late 1990’s – which was something we cannot do here in South Florida, so I was not involved in windsurfing then. It was only when Formula windsurfing became big in the 2003 onwards did I get more involved again. I saw pros like Micah Buzianis and Antoine Albeau on Formula boards – and realized that it allowed windsurfing events to happen in all conditions – giving windsurfing a new life” 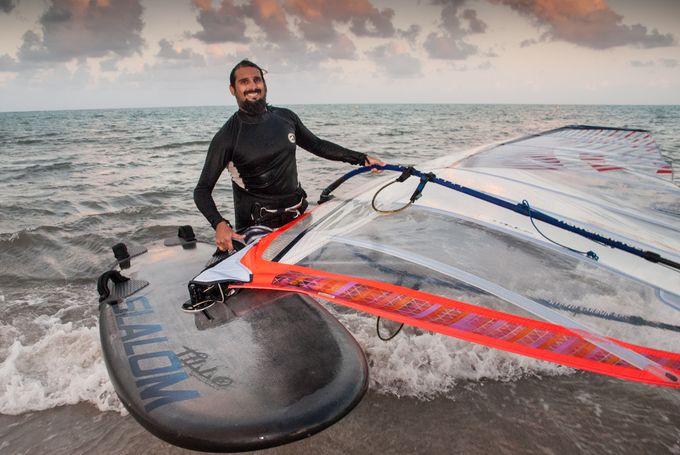 Local competitions started up again and Alex got back into competing at event after event. “Everything came back when I realized that the events were not so wind dependent on Formula and I was fired up – this is amazing – this is what I was made to do. Then I thought, let’s make so more events and took the ball and started running with it.” Soon he had some big names like Micah Buzianis and Jimmy Diaz putting Miami on the windsurfing competition map. Getting sponsorship was tough – so Alex was forced to front most of the costs himself in the hope that the event generated enough revenue to cover them. “If I had to put the money out of my pocket and possibly lose or win, I still did it – the most important thing is that windsurfing is still alive and Miami is on the map.”

Alex then branched out into spreading the word by creating websites, Windsurfingtour.com and Miamiwindsurfing.com. “Facebook and social media websites have become the go-to platform now for this, replacing websites. Nowadays you have 15 seconds to catch someone’s attention and social media does that” Undeterred with his inability to get sponsorship for his events, Alex launched into a new venture – becoming a board and fin manufacturer himself. And thus, the Tillo International brand (http://tillo-international.com) was born. Alex has created a line of custom Formula, Slalom and SUP boards – hand shaped in his own workshop. Drawing customers from South Florida windsurfing community and his website, Alex’s brand is working on building a significant fan base. With many industry players decrying the demise of windsurfing, Alex is not ready to give up the fight. Even when windsurfing as an Olympic event was threatened in favor of kiteboarding, Alex joined a grass-roots effort to have it re-established, resulting in a surprising 180-degree turnaround by the ISAF committee to overturn their original decision. “It’s all about participation, whether it is at the international level or by the local communities. It’s hard at the local level, as amateurs feel insecure about their ability to compete – but keeping these events going keeps the incentive for the amateur windsurfer to get involved and keep windsurfing and buying gear. Windsurfing dies when people don’t put their time and resources into it. The water sports industry’s attention has shifted to kite boarding and SUP – but that will decline in the future too, if the long-term focus is not there.”

“Miami is one of the best cities in the US for these kinds of events right now. Our Slalom event had 53 competitors, including Micah Buzanis which is amazing – considering a PWA event can only have 40+ participants.” Building on this success, Alex has organized his next Slalom Event on November 4th 2014 in Virginia Key in Miami. He is also confident about the future. “Another exciting development is the new generation of kids with the Bic Techno Class having the biggest sailing fleet ever (with more participation than any sailing class) of over 400 kids in the last World Championship. These kids will go onto RSX and Slalom and carry on the flag of windsurfing. Also, new developments with boards and gear have made the sport faster and more exciting, which can now also be captured by low cost technology such as GoPro and drones – so there is no reason why more people cannot be turned on to this incredible sport.”