Bored with the same old windsurfing spots? Want to explore a new, exciting holiday location and use some awesome gear?

Tez and Fi Plavenieks did, so they set off to the party island of Zante to check out what’s on offer for windsurfers.

When the wife and I decided we needed a windsurfing holiday little did we know that we’d be boarding the plane with a load of revelers all heading to the Greek island of Zakynthos. Sitting in the departure lounge at Gatwick, surrounding by stag and hen parties, we exchanged furtive looks thinking: ‘what the hell are we doing?’

It had been a tough decision to pass up our usual haunts of Egypt and the Canaries but we wanted something different and decided to take a punt on Zak’. However, watching the downing of hardcore spirits at 5am by a hen dressed in a leopard skin suit was making us feel like bailing for the next available flight to Vass!

Most Brits will be aware of Zankynthos, more commonly referred to as Zante, which has been a mainstay of the UK holiday scene for years. The popular hedonistic strip of Laganas serves up everything the ‘beans, boobs, burgers and booze’ crowd could ever want.

Nightclubs, strip joints, karaoke bars, fast food outlets and the obligatory Irish pubs are strewn across a small patch of land not too far away from the main airport.

The main beach is actually not overly offensive, apart from the hordes crammed onto sunbeds just centimetres away from the next – invading your neighbour’s personal space is unavoidable here. After visiting Laganas during the day we left needing a shower.

Once out of the hustle and bustle of Laganas and Zakynthos town, the road winds up steep hilly passes and gives amazing views of the stunningly blue Ionian. At points you notice secluded coves that are flanked by impressive cliffs and hidden caves. In the distance is Cephalonia, which resembles a pregnant lady, lying on her back – so I’m told.

We wound our way along the mountain route and after a relatively short drive we arrived at our destination – the small port of Agios Nikolaos and the Peligoni Club.

Lush flora and fauna colours the landscape, making Zak’ one of the greener islands in an archipelago which is scorched by the intense Mediterranean sun.

Upon arrival at Peligoni Club we were greeted by glassy calm waters and sweltering heat. The beach staff welcomed us to our base for the next 10 days as did Snoop, the Peligoni dog and mascot.

Chris Haysey (brother of Jay – owner of Globalshots) is the beach manager at the centre and he informed us that the breeze had been playing ball the previous week, delivering 25 knot days on a regular basis. The forecast for the duration of our stay wasn’t looking too great though – a fact which made me groan inside!

Feeling undeterred and adopting an upbeat and optimistic attitude (after a moment anyway) we decided to cleanse ourselves of the travel grime by taking a dip in the tantalizingly blue waters of the Ionian.

After grabbing a couple of Tushingham Rocks and Starboard Rios, Fi and I headed into the extremely light breeze for a bit of sail flicking. As we drifted along we both made a pact that even if the blow didn’t show, we’d still enjoy our break and use it as a chance to unwind and relax – after all the club had a fleet of Red Paddle SUPs and as keen paddlers we would just make good use of ‘sweeping’ around, taking dips in the sea to cool off.

It was a pleasant surprise when after 45 minutes of faffing about the thermal wind started to fill in!

At first I was taken by aback as I was totally not expecting anything. But after I registered the fact that ‘yes, it is planing conditions’ I made a beeline for the beach to grab some freeride kit.

Sure enough, while adjusting harness lines, footsraps and deck plates the breeze continued to build and as I launched I watched Fi blast off across the shimmering water at full power. Granted, we were both on bigger kit than we would have preferred, but after being told we wouldn’t be getting any kind of blow I for one wasn’t complaining!

After two hours of blissful ‘burning and turning’ we both returned to the beach to be greeted by Peligoni staff, and Snoop, who helped us with our kit.

This may sound a little lazy but you have to appreciate that when I describe the launch as a ‘beach’ what I actually mean is rock slipway. With a bit if practice though it’s actually easy enough to complete ‘ins and outs’ with no worries.

After all our gear was neatly tidied away Fi and I made our way to the bar – sunburnt, salt encrusted and spent, but extremely fulfilled. Those first two (maybe three?) jars of amber nectar slipped down our gullets like velvet and realising we hadn’t eaten anything all afternoon we decided to hold off on a fourth pint – food first was the reasoning…

Before we could leave, however, we were accosted by the club’s owner, Ben Shearer, who was intrigued to have two competent windsurfers as guests. He explained to us that the club never usually attracts regular sailors and it was refreshing to have us both in resort.

Ben then went on to give us the low down on the wind and how it worked. We learned that it’s not uncommon to be sailing on 5m’s for a good portion of the time at Peligoni. Most of the staff by the end of their season are usually pretty handy – even if they arrive having never windsurfed before.

Feeling fuzzy headed from yet more beer and quietly content we headed off to our accommodation.

The best of the rest

For the rest of our stay we spent most mornings spooning around on SUPs or exploring in our hire car.

Zakynthos boasts some amazing scenery including the iconic Shipwreck Bay and Blue Caves – all only accessible by boat. Beach manager Chris took us on a bit of a private excursion one morning with two Red Paddle SUPs so we could nab a few shots – thanks for that Chris!

After rounding off our mornings with a spot of lunch – usually consisting of fresh local produce, picked straight from the gardens of our accommodation – we would sit idly gazing upwind at the approaching wind line heading south from Cephalonia.

At around 3pm the breeze would blast out of the port which signalled it was time to head down to the centre and get wet. We ended up scoring a 90% hit rate with only one day where we didn’t get a decent blow. We had everything from maxed 5m weather (Fi was on a 4m at this point!) to mellow trucking conditions on big freeride kit.

The equipment in resort is a mixture of well looked after, up to date, Tushingham Thunderbirds, Rocks, Dinos, Starboard Futuras, iSonics, Kodes and Flares. With few other windurfers at the centre we had the pick of whichever kit we wanted with generally only members of staff joining us on the water.

After taking a gamble on a new destination, and one that was difficult to research regarding conditions, it was nice to be rewarded with a fantastic stint of windsurfing, SUP and fun après.

Zante truly delivered for us and if the conditions we had during our stay were bad, then we will definitely be heading back to hopefully score some better sailing. Peligoni lends itself to intermediate freeride and freestyle sailors and although you can learn here, our experience of the wind in the morning was near to non-existent. This may vary week to week though.

If you’re looking for somewhere a little under the radar then you’d do worse than checking out Zakynthos.

Tez Plavenieks is a freelance writer who loves windsurfing, SUP, surfing, snowboarding, drums, art and beer. If he’s not out sliding sideways then you’ll find him producing articles, stories and content revolving around his passions. Check out more at www.tezplavenieks.com

A few weeks ago Jamie Drummond took to the waters of Vassiliki to spin round 100 loops for cancer research. Boards has already covered the... 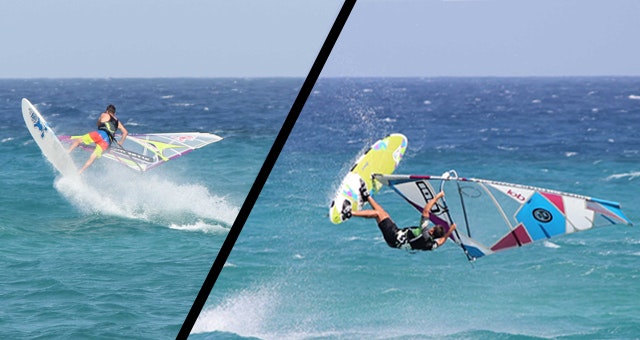 A few weeks ago Jamie Drummond took to the waters of Vassiliki to spin round 100 loops for cancer research. Boards has already covered the... Discover The Key To A Perfect Gybe

Simon Bornhoft runs a whole world tour of windsurfing clinics, helping thousands of windsurfers progress their skills. Check out the recent action and improvements from...

Discover The Key To A Perfect Gybe 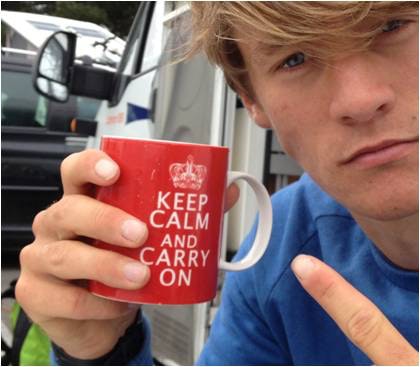 Sam Sills is a busy boy, windsurfing across the UK and around the world, competing in RS:X, slalom and more. Catch up with Sam to...