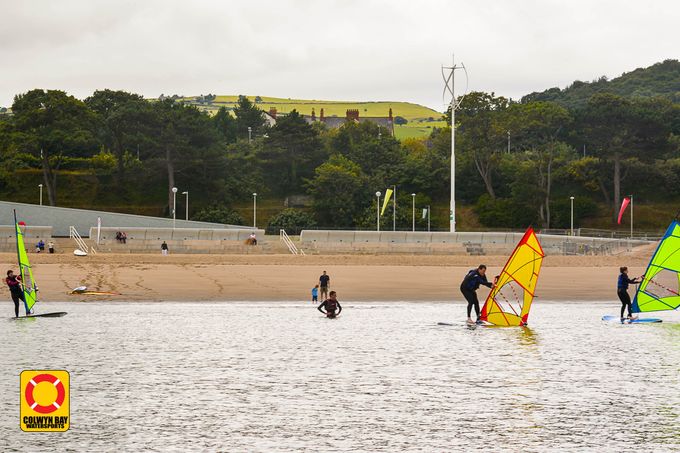 With regional ‘aliens’ re-locating to the area for the quality of its windsurfing, the locals haven’t previously had the same knowledge, education or access to the sport. There was no-one coming in at the bottom end.

But almost three years ago, the team at the then newly-acquired Colwyn Bay Watersports centre vowed to change that. Now windsurfing is seeping back into the local consciousness.

“I grew up here and there are some outrageously good places to windsurf I’ve discovered since,” admits Taffy Osborne, Managing Director Colwyn Bay Watersports. “But I was a sailor, it wasn’t until I went to university in Bristol I started windsurfing. Now we don’t want the locals to miss out.” As part of a sea defence programme to protect the A55, effectively the main road from Manchester to Ireland, the local council built a fantastic new watersports facility on the beach at Porth Eirias. Taffy realised this was his chance to actually run his own centre to do for his community what he never had.

A business plan was drawn up, trusted lieutenants were recruited, including through his involvement in the Student Windsurfing Association (SWA), and Colwyn Bay Watersports (CBW) was born as a Community Interest Company, essentially meaning it falls between being a business and a charity.

The local Colwyn Bay secondary schools were the centre’s first port of call.

As Taffy explains: “We wanted to put in place pathways that would introduce local youngsters to watersports and help them stay in the sport.

“We offered schools six week blocks of after-school activity at a cost price of £7/hour for 2-3 hours. During these sessions they cover the basic RYA Start Windsurfing Stage 1 skills. But we make it clear schools have to fill 10 places for us to run at that cost.” Last year CBW had 30 kids windsurfing every week for six weeks from Easter. This year that figure is set to eclipse 50 as they continue to work with five or six state schools and a couple of private schools that currently have just sailing provision.

Youngsters are then given the chance to join CBW’s weekly OnBoard club through the summer, again following an RYA Youth Windsurfing Scheme framework.

OnBoard ran for nine weeks, with the aim to get kids to a standard where they can get on a bit of kit with a daggerboard, sail upwind and downwind and get back to where they started. Sailors hitting these targets are then invited to jump into CBW’s Team15 (T15) club, the Bay of Colwyn Barbarians.

“It’s a bit early in the centre’s lifecycle for the kids to be going to the Zone Championships, the skill level isn’t quite there yet. But long-term is definitely our aim to beat the West Kirby Warriors!” Taffy laughs, only partly tongue-in-cheek.

T15ers don’t only come through OnBoard; kids already with a certain skill level or those who have attended longer Start courses can also attend.

And it’s not just the town’s youngsters benefiting from new incentives to windsurf. The centre’s Windsurf Wednesdays enable anyone to hire kit for as little as £10/hour for beginner and £15/hour for intermediate kit to sail until the light fades. Safety cover and an on-water instructor aids informal coaching and self-directed learning.

Half-day tasters are available every Saturday from May onwards for £15, while CWB’s location generates hugely productive footfall as anyone walking along the prom has to walk through the boatyard and sees all the activity going on. Parents of the school sailors are tapping into the centre’s presence too through their kids.

Variety is the Spice

Colwyn Bay is a challenging place to learn to windsurf. Northerlies, Westerlies or Easterlies bring bad shore lump, with offshore breezes giving better conditions for beginners. The centre will use a nearby boating lake for flatter water this year too. 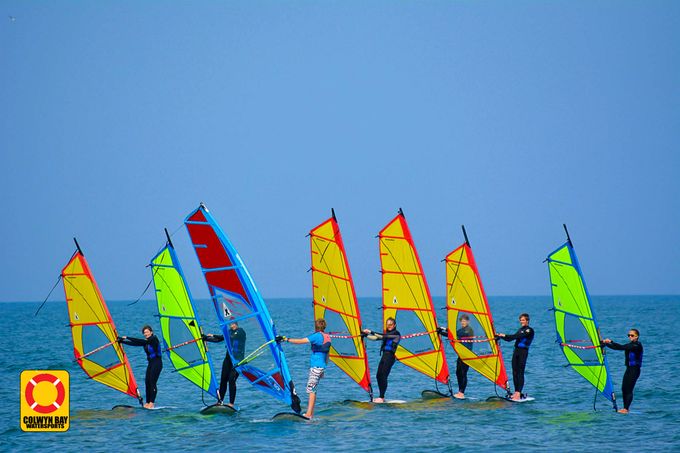 Yet although it might take newcomers slightly longer to master the same skills than sailors learning on flat water, the skills learned in tidal, coastal waters can be more robust with better windsurfers developed.

“Many kids in Britain grow up windsurfing inland, but they don’t develop the skills they need to compete on the sea. Before the Techno Worlds in Brest last year we brought sailors to Colwyn Bay to see, for example, what it’s really like to practice a start in a tidal flow pushing them over the line or going up and down a beach.”

Ali also put Duncan Dumbreck, CBW’s Development Manager and OnBoard and T15 coordinator through his Level 2 Race Coach qualification in illustrious company. She continues: “Duncan came down to the Weymouth and Portland National Sailing Academy and did his Level 2 with Bryony Shaw and Izzy Hamilton! He was delivering sessions for them, so it was a big learning curve and no pressure for him!”

Instructor development is arguably the secret to CBW’s success.

The centre’s commitment and ability to get sailors through Start and Intermediate Instructor training, sometimes as quickly as within a season of learning to windsurf for Start instructors, gives them a constant stream of volunteers and Assistant Instructors to keep extending the activity they can put on for as low cost as possible. It also opens these local volunteers’ eyes to career possibilities within the industry.

Teachers from the local schools are amongst those working towards instructor qualifications, with the aim to ultimately deliver in-curriculum windsurfing and sailing affordably to students. In Wales windsurfing is still used as part of GCSE PE. With Taffy and his team’s ongoing SWA involvement, where instructor development follows a well-honed, sustainable model, combined with the centre’s relationship with the local university at Bangor, many students work for CBW as instructors too.

And it’s not just on instructor training Taffy thinks the industry can learn from the SWA. He continues: “Year on year over half SWA’s membership is beginners. I’m so influenced by that model of affordability as there is much we can learn from it.”

With the centre only completing its first full season in 2014, Taffy already has landmarks of achievement for the coming season. But he knows CBW must keep walking before it runs if it’s going to make windsurfing a local pastime.

He concludes: “There is so much more we want to do. We want to double the numbers we put through OnBoard, we’ve talked about delivering Duke of Edinburgh activity, we want to put more people through Intermediate training and doing Start Windsurfing instructor training as more instructors equals more people we can teach.

“But as a small business, we have to ensure what we are delivering gives us the biggest wins in terms of giving more local people the chance to become lifelong windsurfers. Then we can say we’re achieving what we set out to in 2012.”

Find out more about RYA Windsurfing courses and setting up a Training Centre at www.rya.org.uk/training West Wales has delivered and Alfie Hart just had 5 sessions in 8 days, finishing off with Gnarly Friday 13th at Newgale. Lucky for him,... The crowds were out as yet again amazing conditions hit Rhosneigr in North Wales. Later this year the BWA (British Wavesailing Association) tour will hit Rhosneigr...

West Wales has delivered and Alfie Hart just had 5 sessions in 8 days, finishing off with Gnarly Friday 13th at Newgale. Lucky for him,...

The crowds were out as yet again amazing conditions hit Rhosneigr in North Wales. Later this year the BWA (British Wavesailing Association) tour will hit Rhosneigr... 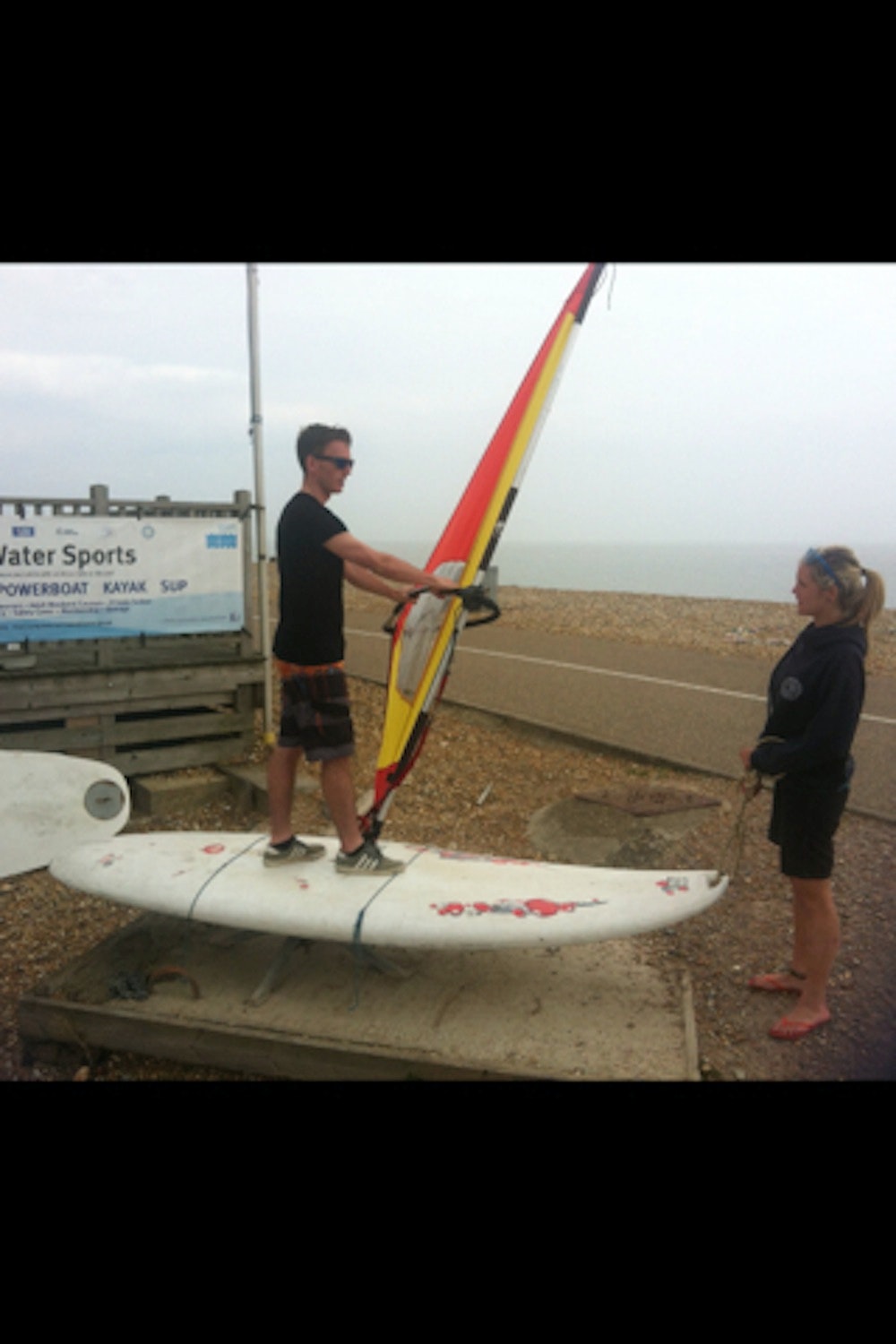 One year ago, Lauran Dees, 20, took up her first full-time instructor job at Spray Watersports in Eastbourne. A year on she reveals the job...