Thursday 17th October 5-7 knots of wind, dropping off as the day went on.

The morning session consisted of a miniature freestyle competition. Dave White showed up with his camera equipment to catch the moment. A few pro’s also showed their faces, including Bubble, Justyna and Ben Profffitt. The competition consisted of duck gybes, heli tacks and various other simple and basic moves. There was a prize giving for this later on in the evening. After lunch, Robin Nicol (coach of the T15 wave camp) told us all to meet down at a Balephuil Bay where we all got together and went out surfing and Sup-ing. After the Surfing session we were told to meet that evening at the Tiree Lodge for the T15 prize giving. During this prize giving a few of the Pro’s showed up to present prizes and take part in last minute autograph sessions. They also gave an encouragement to the fellow T15ers to continue with the sport. It would be good to see them again in future windsurfing events including the annual Scottish Windfest. Megan Makes It Five Out of Five

Megan Kraft is unbeaten in 2013, taking another win at the RYA Team15 Champions Cup! Here’s more on her outstanding achievement from the RYA: Megan Kraft...

Megan Makes It Five Out of Five 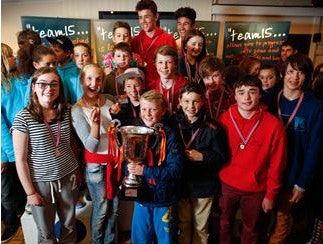