Will Rogers brings you the next instalment of ‘Willy’s Way’, reporting from an excellent ‘summer’ of storm force winds in the UK.

Tired, sore, sunburnt, aching.  BROKEN!  If you have been in the UK this June and are the ‘wrong’ side of 25, you will probably know what I mean.  It’s been windy, five Friday evenings out of five, and the weekends too.  It’s been the perfect weekend warrior windsurfers June.

“But where’s the summer?”  Who cares…it’s windy!

Achieving my five out of five came pretty easy for a UK summer, but still needed a fair bit of effort.  Sailing spots 10 minutes from home a few times and driving for a few hours for others, not only got me sailing unfamiliar spots, but I also caught up with old friends, met new people and had a great experience checking out the 2012 Olympic Windsurfing venue.  Here’s how my five out of five unfolded…

June kicked off with a Bank holiday weekend for most of us, but like many windsurfers in storm battered Britain, I didn’t watch the Thames Pagent, instead I started the five out of five and used the day of to recover from the first June Storm. The spot of choice on Sunday was Marizion, along with at least 40 other sailors – cross on bump and jump conditions that were polished off with a Pasty and then Cream Tea, to re-inforce being British.

Windy summer months aren’t that common in the UK, so as the first week of June blew all the cobwebs away I couldn’t believe my luck and didn’t want to miss a minute. Come Friday I was free from the office and opted to stay away from the coast with huge low spring tides and horrendous SW swells, instead opting to fire out a Freestyle session – ideal 10 minutes from the office.  St. Johns Lake, Torpoint was the spot of choice and it didn’t disappoint!  Full power arm wrenching 4.2 Edge and 91 Flare kept me busy until the tide covered the bar.  A classic start to the weekend and one of those sessions where everything falls into place. The challenge of learning freestyle can be tough but a session like this one is priceless!   For the rest of the weekend I hung out at the Reactive Watersports Demo, checking out the all new Tushingham Rock (http://www.tushingham.com/windsurfing/sails/rock-2013) as well as a load more goodies.

Once again sitting, aching in the office on Monday morning, I couldn’t believe the long range forecast for yet another weekend June storm.  As Friday approached, it just got better and better.  But there was something special about this forecast…enormous SW swell’s and gale force SSW wind would make Gwithian not worth the drive.  Discussions via the top notch local online community ‘ Windsurf Plymouth’ was pointing everything towards a little gem of south Devon.  Wonwell rarely works but on Friday 16th it came up trumps.  Having not sailed here for about 10 years when I was learning to waterstart I had no idea what to expect.  The spot is a steep sided river mouth, which south westerly swells tuck in producing nice shoulder high ramps, with perfect approaches.  Choosing the Flare 91 and Edge 4.7 was perfect for a mixture of brilliant freestyle mixed with perfect jumping.  The comment on Facebook sums up this session – Matt was spot on!

After a good three hours of sailing, I was just about to head in as Reactive Watersports owner Dave Ewer blasted out – there’s no way you can pussy out when your sponsor asks you to sail upwind to “out run some hollow monsters” on Mothercoumbe Reef a mile upwind. Half hour later I found myself struggling in mast and a bit messy breaking swells on my freestyle board with Dave advising me – “Don’t get too close, it sucks pretty quick…” Smiling and nodding while watching Dave getting fully involved with the pocket I was thinking “Don’t worry Dave, I’m not going anywhere near that!”

At break of dawn on Saturday morning, yet again mother nature was unleashing her anger on South Devon.  With my arms feeling six inches longer after the downwinder from the reef, I opted for a local freestyle session but spent most of my time watching the impressive speed runs, feeling completely broken.  three of three – DONE!

Weekend Four – Near and Far

By now, I’m starting to EXPECT Fridays to be windy, and it was no different this week, with Saturday and Sunday looking perfect further East.  Side on 20 knots and a moderated head high swell as well as wall to wall Sunshine at Bigbury was never going to keep me away.  Getting reports in at 9am of Andy King loving it on a 5.3 got me excited and by 4.30 I was rigging while simultaneously froathing.  Not surprisingly, Andy was still out with me until 6 enjoying good jumping and the odd wave ride.  Chilling after the session with Fish and Chips overlooking Burgh Island, and ready for more action I hedged my bets on the rest of the weekend at Portland Harbour and hit the road.

Saturday started late (beer induced) but turned into a top marathon long freestyle session.  Sailing from the OTC UK centre, it was brilliant to see so many people getting absolutely stoked on windsurfing right in the heart of London 2012 Windsurfing venue.  With a plethora of nationalities training hard on RS:X as well as all the other sailing classes it got me really addicted to the location.  Hungover as I was, its difficult not to sail all day in a superb location such as Portland Harbour and with the OTC centre fully kitted out with all kit fully rigged with top instructors, there is really no excuses!

It’s nice to save the best till last, which is exactly what June did.  A shakey forecast in the SW and my new addiction to Portland Harbour was a no brainer . feeling as if I hadn’t left I was back sailing in Portland by 7pm Friday evening.  Sunshine and wind, coupled with smiles all round from hundreds of windsurfers, plus good times with windsurfing friends from all over the UK for 3 solid days confirmed to me that my love for windsurfing was certainly back!

Looking back on a great month of windsurfing, the effort put in to get windsurfing paid off in more ways that just a great session. Going to new spots gave me a new buzz for the sport, making the effort to travel helped me catch up with friends and see the awesome Olympic venue weeks before the Olympic windsurfing regatta and meeting new people who were all completely stoked on the windsurfing buzz was awesome to see. Get out there and aim for your five out of five – fingers crossed for a windy July!

Will Rogers is sponsored by:

Catch up with all the latest from Will on Boards including his previous columns here. Tushingham/Starboard rider Sam Sills gets plonked in the hot seat and grilled over his windsurfing career to date. Q: Age A: 19 Q: Current sponsors? A: Tushingham, Starboard, Predictwind,... Check out the Tiki Documentary about the Starboard Flare below – http://www.youtube.com/watch?v=u9wZzNqcR8c 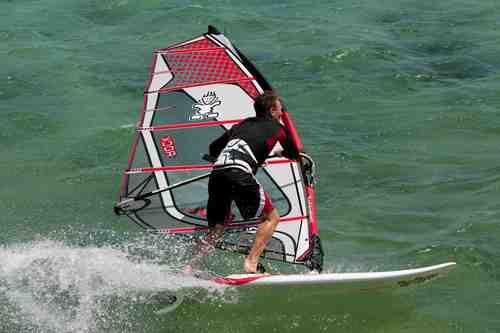 If you hadn’t already spotted it, Tushingham/Starboard sponsored technique guru Simon Bornhoft is on the commentary team for the BBC’s coverage of the Olympic RS:X...

Tushingham/Starboard rider Sam Sills gets plonked in the hot seat and grilled over his windsurfing career to date. Q: Age A: 19 Q: Current sponsors? A: Tushingham, Starboard, Predictwind,...

Check out the Tiki Documentary about the Starboard Flare below – http://www.youtube.com/watch?v=u9wZzNqcR8c

If you hadn’t already spotted it, Tushingham/Starboard sponsored technique guru Simon Bornhoft is on the commentary team for the BBC’s coverage of the Olympic RS:X... During Radio 4’s Last Word programme Dave Hackford and Bill Mai spoke about their friend and windsurf legend Jim Drake who many will know passed... 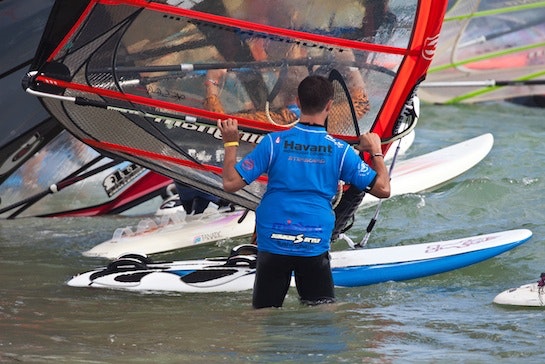 If you want to check out some of the latest Tushingham sails then they will be exhibiting at this years National Windsurfing Festival on Hayling...