It is always fantastic to hear about people and clubs bringing fresh faces into windsurfing and the Windsurf Club, based in Newburgh, are doing just that. From getting a dozen kids onto the water, to becoming a fully fledged club ready to run yet more training in 2013 the Windsurf Club are going from strength to strength. Boards catches up with the team to find out more.

The Windsurf Club is based in Newburgh (just north of Aberdeen), Aberdeenshire, NE Scotland, and does exactly what the name suggests.

The river Ythan in Newburgh is a tidal location which has been popular for decades and many of the local windsurfers who first got hooked here are now wave sailors, including Tiree Wave Classic Amateur competitors such as “Wavey” Davey Bichan who got a podium place a few years back. There is also Loch of Skene located West of Aberdeen which offers flat water but our main spot is the renowned Newburgh.

The club was founded in 2012 when a few local windsurfers decided it was about time that we introduced some new blood into the sport as the demographic consisted of a bunch of old fogeys (well mostly thirty plus anyway). The group offered some windsurfing taster sessions to local kids in August last year on a rag-tag selection of our own kit and that borrowed from other local sailors such as Frank Peet and Toby Edmunds. We made a simulator for some shore training based on the Eva “The Boardlady” design using a heap of golf balls, and then moved onto the water even though we only had one true kiddy rig. The two adult 3.7m sails were too big for most of the kids, but they were more than happy sitting on the front of the boards being sailed around “the baby pool” by the team.

To be fair, the best bits of kit we had were the buoyancy aids, which we had bought specially for the occasion. Despite these kit limitations, the results far exceeded expectations with up to 11 children absolutley loving the experience and wanting more. The Awards for All grant that we subsequently secured has allowed us to start buying proper beginner and kids equipment and the club is preparing for a busy summer, with growing support and interest from the local community. After last year’s success at the Newburgh Jubilee Picnic where we were trying to give folk a bit of an idea of what we were trying to achieve, we have even been invited back by the Gala committee to let kids have another go on the simulator.

The club is affiliated to the RYA and the help and advice we have received from them as we are progressing with our plans has been truly invaluable. We have also recently joined up to Project Windsurf so we can share our news and events, to help promote the club and gain interest locally and nationally.  We hope this will connect us with other clubs and we look forward to sharing the clubs first true season with windsurfers everywhere.
The main goal for this summer is to get more local kids on board.  By following the RYA teaching scheme they can then easily progress through the stages and onto T15 / waves / freestyle etc.  However, we are happy for anybody can get involved with the club regardless of age, sex, race or ability.  We are always keen to get on the water and share our love for the sport, making the most of the fantastic range of conditions offered here in the north east of Scotland.

Ali began windsurfing in Newburgh after inheriting his dad’s obsession for the sport on a holiday to Tiree. He has worked in Greece, Turkey and New Zealand as a windsurf instructor and is stoked to see the next generation getting on the waves.  He’s been sailing Newburgh for nearly 20 years.
Danny is a surfer and is progressing fast in windsurfing. He’s a true sportsman with more boards, bikes and injuries than normal. He brings enthusiasm, experience, dedication and huge amounts of essential hot chocolate to the club.
Rob has been windsurfing for over 30 years, he has vast wavesailing experience and many tales of sharks, pirates and “boardsailing” from as far back as the 80s. Ask him any technical question about windsurfing and you could be talking for hours…
Rob’s windsurf obsession has passed onto Wendy.  A few years back, they spent almost a year surfing around Europe, so although Wendy prefers the warmer waters for her windsurfing, she is an excellent team member and organiser for the club.
Check out more about the club here www.thewindsurfclub.co.uk and find out more about the RYA and how they support windsurfing clubs here. 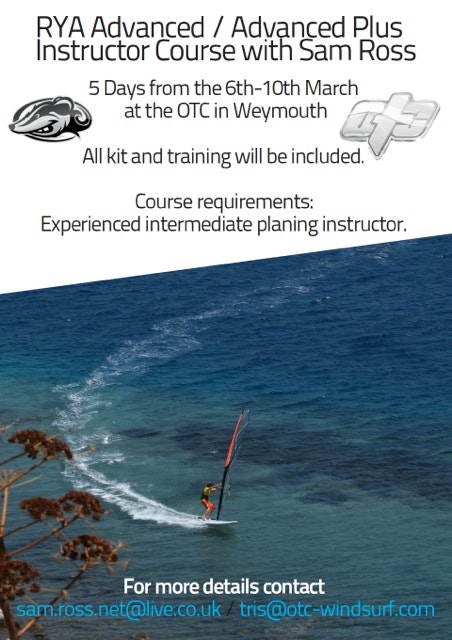 Sam Ross is running an RYA advanced instructor course at the OTC powered by Puravida Boardriders in Weymouth; is it time to progress your coaching... The Best Job in the World?

We’d all like to get paid to go windsurfing, but in reality, only very few of us will ever even come close to becoming a...

The Best Job in the World?