Sam Sills is one of the UK’s most talented RS:X racers. His skills on the one design Olympic race-board have lead him on the closest possible path to the Olympics. With his sights now firmly set on the 2020 Games we asked Sills to join us on Boards for a monthly column which will track his progress from the current day right on through the highs and lows of selections, training, pre-olympic regattas and so on. From Mountains and volcanic lagoons to open Atlantic Swell and flat water paradise Gran Canaria crams a lot in to a small space. Sam Sills reveals life traveling, training and exploring with six Rsx Racers around this island paradise.

It was the moment I casually sailed out the harbour to 6 meter rising monster waves, 200ft oil tankers and howling 25knots I realised Gran Canaria isn’t your typical windsurf venue. Local sailors cruising out the bay unfazed by the fact these giant iron beasts engulfed the race course.

The super tankers in question was just one frame in the slide show, shark sightings, huge Atlantic walls of water and an hour windsurfing upwind to the race course provided quite the challenge. Aside the unusual sailing conditions, mountain back drops and lush thermal winds allow a paradise to live and train. The north is leafy-green and mountainous whilst the south is exposed and desert like, rolling sand dunes flow as far as the eye can see. With such diversity the island is said to be like 5 different continents. At the centre, 1949m above sea level stands the highest point, rent a car and cruise up the winding route to the top or if you’re feeling fit biking is an epic option. From Las Palmas to the top it took our lean Viking blooded Norwegian coach just 4 hours. As you climb higher the scenery dramatically changes, transcending from city to exotic plantations, rich pine trees and finally reaching deep mountainous canyons filled with open spaces and mega views. It’s perfect to escape the hustle of modern living.

Once you’ve filled your lungs with the fresh mountain oxygen and detoxified your 21st century over operational brain you’ll probably be feeling a little hungry. A nice option from here is to head northwest, hairpin bending through and down the mountains you reach a quiet fishing village, Agaete. Walking along the black sand beneath the mountains you’ll stumble upon the harbour and find a small restaurant serving fresh fish, straight from the mornings catch. The view looks over the water to the highest mountain in Spain. 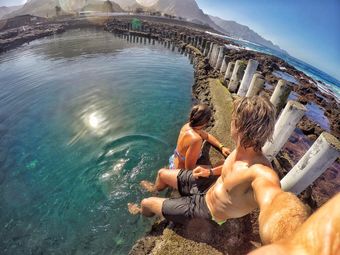 Teide towers up from the neighbouring island Tenerife, a perfectly angular pointed peak floating gracefully above the clouds. To top it all you can wonder up the street, strip off and jump in the natural volcanic sea pools, located at the base of the mountains, again with the view of Teide. The pools are filled with wildlife and interlinked by underwater tunnels, perfect to stretch your overworked body and chill ya socks off.

As we headed back to the apartment, talks of dinner start to arise, there are six of us so we share the cooking in double teams. Naturally with an eclectic Scandinavian and Cornish mix we get a wide variety of dinners. Sebastian and Maria like to be efficient with the careful thought in the needs of protein, carbs and nutrients, often with some tasty secret recipes I’m yet to figure out. Sjur and Andre have a kind of ‘master chef’ approach, with an emphasis on passion and style, often not much on the plate though. With Adam and myself it’s a bit more like ‘prototype experimental’ dinners, we should offer a consumer disclaimer but the crew don’t seem to mind and the most important factor is to fuel up, which with six rsx guys is normally just enough to feed a small elephant enclosure. Life with the guys is pretty good, now the plan is to base training here for the coming weeks and fly up to Palma early March for the Princess Sofia regatta. It’s an Olympic Qualification for many sailors, the spring season conditions are fairly unpredictable and the week is often varied between nuclear winds to blistering no wind pump off’s. Adam Holm, my great friend and training partner will be fighting for his place to qualify Sweden to the Olympic Games. Having just returned from a month grinding away in China it’s great to be back on the water with him, I can’t wait to push harder than ever and get the man to Rio.