Once again Boards have teamed up with the SWA to bring you our latest feature on the next talented young wave sailor who has a fighting chance at the highly acclaimed SWA Wave Series title this student season. Introducing Louis Morris. The SWA Wave Series is on the way! On 4-6th December the first event kicks off in Plymouth with the “Rumble in the Jungle” theme organised by Plymouth and Exeter Universities. With possible locations including the famous Gwithian beach it’s set to be an epic start to the season! Buy your ticket now at www.studentwindsurfing.co.uk

We had a word with Raceboard legend and last year’s Wave Series winner Louis Morris, to see how he has been preparing and how he is feeling ahead of his title defence campaign. BM: Hi Louis, we hear that as well as becoming UK Raceboard champion for the second time you’ve been finding some time for a little wave training over the last few months?

LM: Well, not as much as I’ve wanted! I spent the summer at home in Cornwall, working at Polkerris Beach as a windsurf and dinghy instructor. It’s a perfect place to train raceboard, but there’s not much wind in the summer. Last year I had two sessions on 5.2 and that was about it! However, this year was a bit better, I managed 2 really good wave days in August at Bigbury and Daymer, a couple of rather small marginal days, and then at the beginning of Sept I had an epic 3.7 down the line session in south Wales. I went to Greece to train some freestyle in September, and since then I’ve been at uni on weekdays and no wind at weekends! 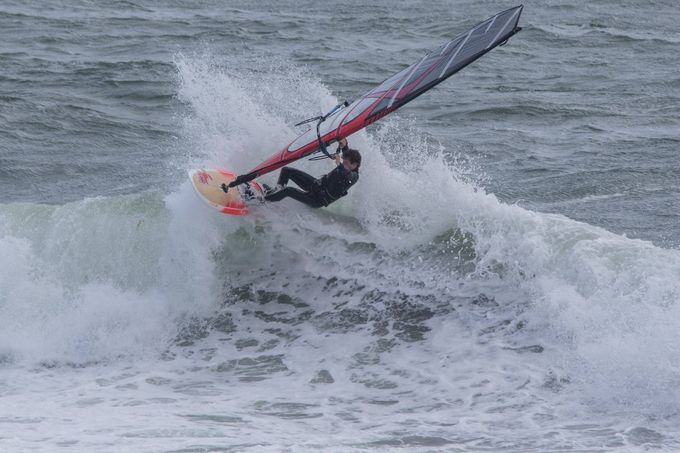 BM: As the reigning SWA Wave Series champion, how confident do you feel going into the new season?

LM: I don’t know, I’ve learnt from racing that the best way to approach competition is to expect nothing, stay focussed and have fun. There is some pretty tough competition, especially Ben Page and Sara Kellett (BWA amateur and womens champions!), but I know that I’m pretty consistent on both tacks, onshore and cross-off, with a good forward loop and maybe some table tops, so whatever the conditions, I can give a good fight. We’ll just have to see how it goes!

BM: Who do you think will be the main challengers to your SWA Wave Series crown?

LM: For sure Ben and Sara, if they make it to all the events. Sara couldn’t make it to PlymEx last year, and Ben had a broken hand, so that helped me a bit! BM: Being a Cornwall local you must be looking forward to the first event at Gwithian, what sort of conditions can we expect?

LM: haha, well, last year wasn’t exactly classic! We had dumpy bolt onshore bluff! Hopefully we get a strong SSW and big long period waves. Not too big as it can get pretty messy and out of control. In the winter these conditions happen regularly, but it often goes too westerly for Gwithian, so we might end up competing at the Bluff or Marazion.

BM: You are currently ranked at 4th in the world for Raceboarding. Do you think that being so accomplished as a racer gives you an advantage in the waves?

LM: hmmmm, I don’t know. I think racing since I was 13 or 14 just made me a good windsurfer in general, as it forces you to have your technique as perfect as possible, so I think that might have helped me learn wavesailing relatively quickly. It might maybe help me plane early and have fitness for long sessions? But actually, for racing I have a 265 litre board and a 9.5 sail, so it couldn’t be much different really!

BM: When did you first start wavesailing? Would you encourage other racers to get into waves?

LM: I first started wavesailing when I was 18 I think. I had just quit RSX, had no money, and bought the cheapest old school waveboard I could find. Trouble is I didn’t have a car, I remember my first session, I managed to get a lift to Bigbury with local legend Dave Ewer who owns the local shop (Reactive Watersports). It was big (for a beginner) and windy: I swam a lot! The SWA wave series was the perfect way to improve, we had a couple of events with nice easy conditions, and experienced guys around to offer advice, so it’s since starting uni that I’ve got into waves really. Racers should definitely try waves, it’s so much fun! Don’t expect to be able to do it straight away, and spend time on flat water getting used to the small gear. BM: What advice would you give to other racers or anyone else who would like to try their hand at wavesailing?

LM: Like I said, spend time on flat water getting used to the small gear. Make sure you can sail it in non-planing as well as most wave spots in the UK are mega gusty. Make your first few sessions in small mushy waves and cross/on wind. Talk to the wavesailors at your local beach, you learn a lot this way.

BM: What is your favourite thing about wavesailing?

LM: 1. Bottom turning full speed in front of an overhead+ wave. 2. feeling the power of the wave push and re-direct the board in a top turn  or aerial.

BM: Thanks for your time Louis, good luck on the SWA this year! Buy your ticket now at www.studentwindsurfing.co.uk ! It’s gonna be MASSIVE!

The ‘Puravida SWA Wave Series’ is run and organised by Puravida Boardriders with the support of ION accessories and Vandal Sails.  Thanks to the SWA, the BWA and our event hosts Funsport and RB Sails for all their support