Will Jones joins Boards for his last monthly column, but fear not, it is not the end!

With the end of another academic year it’s time for some changes. Sadly, at the end of a second epic year in charge Sarah (Arts) has announced that she is stepping down as SWA president. Sarah has done a fantastic job during her time as president, growing the SWA to record new numbers and imposing a much more professional method of operating on the organisation. Over the past year I’ve had a blast as Head of Media for the SWA. I’ve really enjoyed every aspect of my involvement with the SWA committee. It is therefore with a mixture of apprehension and excitement I am happy to announce that I am going to step up and attempt to fill the big shoes Sarah leaves behind, taking the reins as SWA president with immediate effect.

I’ve announced this new position to a few people already. On doing so I’ve been met with the following questions:

I’ll try my best to answer these. 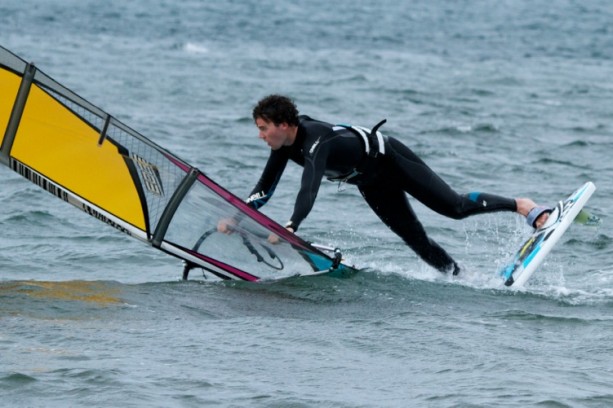 The reason I decided to take on the role as president is simple enough: because I am passionate about windsurfing and developing the sport.  I genuinely get a kick out of getting new people involved with the sport and at the moment I think there is no organisation doing this better than the SWA. Further, I think the SWA is in a position where I can use my knowledge to help evolve the organization further. I hope to use my extensive instructing experience to progress the way we run beginner tuition and use my experience of competition to help develop our race, freestyle and wave series’, providing the talent amongst the SWA with the recognition it deserves.

There have been several other changes to the committee. Sadly a few people are moving on (such is the burden of the real world) but plenty of exciting new editions join us. Watch out for a ‘Meet the Committee’ feature appearing on www.studentwindsurfing.co.uk very soon.

As for the SWA monthly articles……well first of all, I just want to say thank you to all of you who have been reading them and giving your feedback. Some of the comments have been genuinely quite touching and made writing the column an absolute pleasure. My monthly contribution is going to end now, but the articles will continue in the very capable hands of the new SWA Head Of Media; Duncan. I now hand over to him….

Well, I guess that proves that all good things must come to an end. Over the past six months I have really enjoyed reading Will’s column, and it has made me think a lot more about my own windsurfing.

The great Levi Siver once said “when we started this sport we had no idea where it would take us” and if you had told my parents that their dyslexic son would be writing a monthly column, I bet you they would not have believed it.

So here I am taking over Will’s column and I have been thinking why I liked Will’s musings.

To start off I thought I’d throw in a few facts about myself, much like Will did in his first article here, back in January.

Number of Years Windsurfing: Had a terrible experience of it when my dad tried to teach me on holiday at age 11. Then saw a friend planing when I worked in Greece aged 19 and decided to try again.

Favorite Spot: Rhosneigr (an obvious choice given the proximity to Bangor Uni.)

Sailing Ability: Currently sitting in 7th position on the amateur BWA tour (more a reflection of my ability to turn up at events, than of my wave sailing.) Landing tabletops and the occasional loop.

BWA Involvement: Competed on the tour for the first time last year, now joining the committee to encourage younger people to get involved.

So now you know a bit about me, and to anyone who already knows me Hi!

I thought for starters I would talk about why I love the SWA.

I’ll start off with what is very obvious, I love windsurfing, and by extension anything that has any remote link to windsurfing generally appeals to me. But I’d be ignoring the bigger picture if I were to say that is it.

I’ve come to realise that the SWA is a brilliant proxy for my travels around the country. I’ve been to places and windsurfed where I generally wouldn’t have bothered if it weren’t for the SWA. As a university student I would say I have visited (and partied in) more cities in the country than most other students. In each of these cities I have made friends, who I now windsurf with very regularly. It is useful having friends from all over the country who love to windsurf, as if you are travelling somewhere there is normally a floor or spare bed you can crash on, and someone to go drinking and sailing with.

The cool thing is that everyone loves to windsurf with friends, and through the event series I get to meet up with my friends once a fortnight and go windsurf with them. We windsurf no matter how much/little wind there is. We don’t cancel because the forecast is for 4knots and the temperature is 1 degree. We go out and learn light wind freestyle moves (and believe me you learn a lot faster when the cold water punishes you for getting it wrong).

There is an awesome sense of community in windsurfing and especially the SWA, where the majority of presidents of the university clubs know each other well. How many other sports clubs at universities can say the same? In Bristol there are two universities. Bristol Uni. and the University of West England. In the windsurf world the two clubs have hooked up to make one awesome big club that has an amazing social and windsurfing scene (and is affectionately known as BRUWE). I don’t know of any other sports that do this. In fact most other sports teams in Bristol have extremely strong rivalry. By training and working together both clubs are a lot better off than they would be otherwise, and this boils down to the ability to see the bigger picture, and the good vibe that windsurfing has.

So, when I think about the bigger picture, and why I love the SWA it is because it encapsulates all that is great about our sport. The sense of community, dedication, willingness to help and unfailing enthusiasm for foul weather that we all share.

Follow the SWA Monthly and all the SWA news on Boards here.