Will Rogers needs no introduction after such a great opening column. If you missed it then scroll back through our features. This month he brings you an amusing insight into a second condition many windsurfers may not have realised they are suffering from… Until now…

I first was introduced to the concept in 2009 when I traveled to Dakhla in the Western Sahara with a load of equally stupidly keen windsurfers, but it wasn’t until then that I knew I had been suffering from it for years previously.  The trip consisted of A LOT of freestyle on Dakhla lagoon, which is arguably one of the best places in the world to learn freestyle fast.  We camped in the middle of the desert, slept in the sand, got continually eaten by flies and constantly battered by 25 knots of damp, cold Atlantic wind.  Added to that, we sailed off a sandbar that was so good, because it was so hard to get to… being a low tide spot inaccessible by road, it involved a 300 metre walk from the tent, a 1km sail, then a mile hike across wet sinking sand (fully exposed to the very strong wind) followed by another mile sailing OR a ¾ downwinder followed by a ¾ mile upwind slog with a 16cm freestyle fin and a back pack full of the days water, food and camera kit. For 2 months we did that journey daily timed perfectly with the tide times, some weeks we would do it twice, waking before dawn sailing until the spit was covered, heading back to camp for a power nap then doing it all over again that evening, returning usually after dark.  It wasn’t an easy task, but out of the 10 sailors out there, no one ever missed a trip to the speed spot.  The reason was put down as F.O.M.O – no one wanted to miss out on a great session.

FOMO had entered my life on multiple occasions already, and sometimes with some extreme consequences, although as I had no responsibilities they were pretty easy decisions. Having been lucky enough to get away on a windsurfing trip for every summer while at University, entering the world of 9-5 work was going to be difficult. Minimal holidays and a sport dependant on an unreliable power source, as we all know isn’t the best mix.  In 2008 I resigned from a good well paid management role, because I just could not resist the temptation of 10 weeks in Europe…..and for the 2009 Dahkla trip I did exactly the same having learnt that my friends were hitting Dakhla, of which I had had a taste of in 2008. I just couldnt face missing out on what I knew would be unmissable, even though it was a 3000 mile drive to live in a sand pit!  My CV wasn’t important – a windsurfing fix was!

A few years on, and my FOMO sensitivity seems to have been turned down a little, to a more manageable level – maybe that’s just me growing up… In 2010 I celebrated staying in a job for the first time for more than 9 months, now I’m over 2 years in. I’ve made FOMO a little easier to manage by choosing where I live carefully and what I do for a living, but this time of year always tests my FOMO levels when I go to work in the dark and get home in the dark, to sit down and watch MPORA windsurfing videos of everyone living the dream in board shorts, drinking caipirinha, surrounded by palm trees bent in half by 25 knots of warm brazilian wind.  That even drove me to start windsurfing in the dark – I’m lucky flying to Jeri is an expensive destination as I would have probably quit my job if it wasn’t!

That all taken into account, I still drive plenty of my non windsurfing friends crazy with the inability to commit to anything more than 3 days in advance as I’m fearful of what the forecast may make me miss out on, to be honest I still live in a constant state of FOMO. If there’s any hint of wind I’ll drive to the beach, just to be sure I’m not missing out, and if another engagement stops me from being at the beach I’ll be twitching knowing I’m missing out. I am generally very fearful of wedding season….

I guess there’s some ‘negatives’ that come out of FOMO but really it’s a wonderful thing when you break it down. I’ve met few other people who experience a similar ‘disorder’ from any other sport, windsurfing is a sport that gets you hooked, captures your attention, pulls you in and gives you a constant scope for improving, learning and adventure. From the moment you first get moving forwards, through to your first tack, getting planing fully locked into the straps, the very first carve gybe, vulcan, spock or wave ride – at every stage it empowers you unexplainably to target the next level. But perhaps what makes it so special is that we CAN’T go windsurfing all day, everyday or even whenever we want. When it’s not possible to windsurf we want it even more and ultimately suffer from the symptoms of FOMO. It’s a bit like love I suppose…so be proud to be a windsurfer and keep loving your sport.

Share your extreme FOMO stories on the Boards.mpora forum… 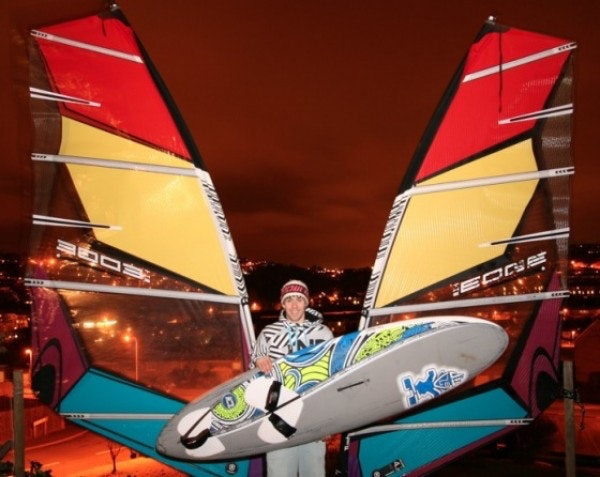 UK ripper Will Rogers has hooked up with some new sponsors… We catch up with top freestyler Will Rogers to get the lowdown on his new...

UK ripper Will Rogers has hooked up with some new sponsors… We catch up with top freestyler Will Rogers to get the lowdown on his new...