Day 6 – Freestyle’s freshest flip the vibe with a fistful of tricks in Furteventura.

On the opening day of freestyle competition a handful of new school youngsters upped the stakes with an awesome display of trickery alongside a gang of well-established tour regulars.

Despite the wind not blowing at full force, head judge Duncan Coombs made the most of a late afternoon breeze, which enabled the first round of heats to be completed. With an epic forecast for the next few days, the organizers decided to halt the proceedings early in the evening, so that the competitors could perform to a higher level for the weekend crowds.

New Kids On The Block

Amongst many others, one of the freshest faces to join the tour here in Fuerteventura is the youngster from Bonaire, Youp Schmit (Starboard, Gaastra). With a repertoire full of slick flakas, shakas, konos, and esliders, the fifteen year old took down Dai Nagamine (Starboard, Severne) to move through to the next round. Nagamine fought hard throughout the heat, but it wasn’t quite enough to compete with the new kid on tour.

Another youngster to sail true to form today was Daivis Paternina Teran (Fanatic, North) who was up against Britain’s young hopeful, Max Rowe (Mistral, Simmer). After an extremely close battle the Venezuelan just nudged ahead on a split 2-1 decision from the judges with Paternina Teran just winning them over on technical skill.

The sailor of the day was tour regular and current top five ranked styler, Maarten Van Ochten (JP, NeilPryde, MFC) who would have been forgiven for feeling a little bit nervous going into his heat against the 2009 Pozo wave champion, Philip Koster (Starboard, NeilPryde, Dakine). All eyes had been on Koster during practice to see how he would perform in the discipline of freestyle, especially in the lighter winds which the contest was being held in. Koster looked like he had plenty of moves in the bag, but they were no match for the seasoned freestyle pro, Van Ochten who pulled off a more diverse range of technical moves in the six-minute heat. There’s no doubt Koster will fight back in the double, especially if the forecast comes to fruition.

Another tour veteran to take down one of the new kids on the block was Britain’s Andy ‘Bubble’ Chambers (JP, NeilPryde). He was seeded against fellow Brit, Adam Sims (RRD) who couldn’t quite match the diversity of moves that Chambers had up his sleeve.

The outlook for the coming few days of competition looks fantastic with strong trade winds and a small swell hopefully arriving in time for the weekend. Today was simply a taste of what’s to come, with the World’s best yet to unleash their huge power moves in front of the judges and world media.

Flag Beach in Corralejo, Fuerteventura and established back in 1988 By Ben Thomas who currently still owns and manages the centre and whose hut was...

Flag Beach in Corralejo, Fuerteventura and established back in 1988 By Ben Thomas who currently still owns and manages the centre and whose hut was... 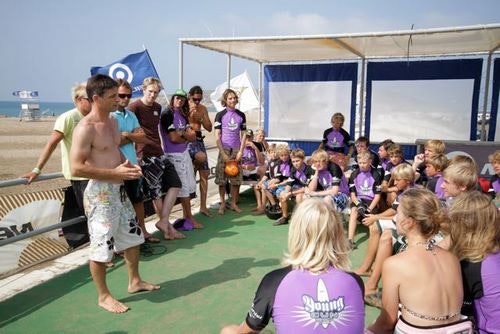