In an incredible first day in Fuerteventura the flying Frenchman, Cyril Moussilmani (Starboard, North) sailed flawlessly in the tough conditions to create an amazingly consistent set of results which includes a first, second, and third. His nearest rivals failed to match his slalom prowess putting him 5 points clear at the top.

The idyllic racing conditions found on the southern shores of Fuerteventura today provided the perfect start to this very special 25th anniversary grand slam. From first light, the wind showed great promise with the North Easterly trades guaranteeing the action. The course was set early enabling the sailors to commence battle on schedule at 10:00 in front of the many spectators lining the shore.

Throughout the morning the wind increased with gusts of around 30 knots sweeping across the course. Most of the competitors began the day on their 7.0s with a medium sized board. But, late in the afternoon many were holding on to their 6.2s and smallest boards often commenting that they should have been on something smaller.

To say that today belonged to Moussilmani would be a complete understatement. The Frenchman not only qualified for every winner’s final, but did so with immense style. Not once did he fall out of the top three during his qualification rounds, and neither did he during the finals, stamping his authority on the elite group of professional racers.

A second in the first race of the day behind the 2009 world champion, Antoine Albeau (JP, NeilPryde) put him in high spirits from the start. And, a win in race two had him as high as a kite, with little anyone could do to steal his glory. A third in race three was his worst result, but his consistency had paid dividends. And, in such a strong fleet, a third is hardly worth complaining about!

“It was a great day for me today because I’m in first place overall, and I’ve never led the slalom fleet before which is amazing, especially as it’s such a windy venue. I’m not too bothered if the wind remains as strong as it was today, I’m just looking forward to getting out there again, and beating as many other people as I can. For now I’m really happy, and looking forward to the rest of the competition.”

Moussilmani’s nearest rival is the modern day slalom maestro, Antoine Albeau who failed to put quite as consistent a set of results together. He was seen taking it easy in many of his early round heats, often letting people pass him which was surely part of his game plan of conserving energy for the all important finals.

After claiming victory in race one by leading from start to finish many thought it would be an Albeau white wash once again. However, an almighty explosion in the final of race 2 put him fully out of action for the rest of the race, and counting an eighth until a discard comes in. True to form, Albeau was back with a vengeance in race three, but after passing Moussilmani, couldn’t quite catch his team-mate Micah Buzianis (JP, NeilPryde) who stopped the legend from putting two bullets in his bag.

“Today was a real mixture for me with two solid results – a first, and a second. But, the huge catapult I had on the first leg of the second race final was a disaster. I had a good start and plenty of speed, but I think I was going a little bit too fast for the conditions. I saw a huge piece of chop that had doubled up with another bit just in front of me, and I said to myself ‘this is going to be painful’. I tried to remain confident and go straight over it, but I couldn’t! I broke my boom, my harness line, my mast, some cams, and a few battens! I’m looking forward to some more racing tomorrow though.”

Former world champion and jack-of-all-trades, Kevin Pritchard (Starboard, Gaastra, Dakine) showed extreme consistency today, qualifying for all three winner’s finals, and posting a sixth in every single one. Pritchard might not have stood out with immense bursts of speed, but as he well knows, that’s not what winning’s about. Consistency is key, of which Kev has in abundance!

Despite the many times world champion and living legend, Bjorn Dunkerbeck (Starboard, Severne) being one of only four sailors to qualify for every final – the rest being those mentioned above – he failed to capitalise on his awesome speed. It all went horribly wrong for Dunkerbeck at the start of the day when in the race one final he flew off the line moments before the gun, resulting in a PMS as his initial posting for the event. The second race final didn’t see him make much of an improvement, with a seventh being all he could manage. A fifth in race three improved his overall standing, but if he wants to win he’ll need to start scoring bullets.

Finian On Form – But Broken…

Although currently missing from the top ten overall the 2009 world rankings runner up, Finian Maynard (RRD, Gaastra) deserves a mention. He was without a doubt one of the fastest sailors on the water, and in the first two races was more consistent than Kev with two thirds to his name. Unfortunately for him, the strong winds took their toll on his equipment, and he broke a harness line just before one of his heats began in race three. He actually made it back out after coming in to change it, sailed his heat after starting last, gained momentum around the course, and finally finished in a qualifying position. However, whilst he’d sailed back to the start line it became apparent that he’d broken a rule – sailors are not allowed to sail in the triangle between the start line and the first mark in the minute leading up to the start – and was therefore automatically disqualified from that heat. When a discard kicks in, expect to see Maynard move up the results sheet.

The forecast is looking good for the rest of the week so we should see plenty more action before the event is over. Anything can happen, and discards will appear soon, so watch out for the legends taking control. 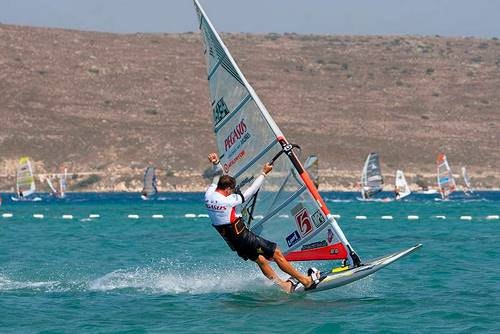 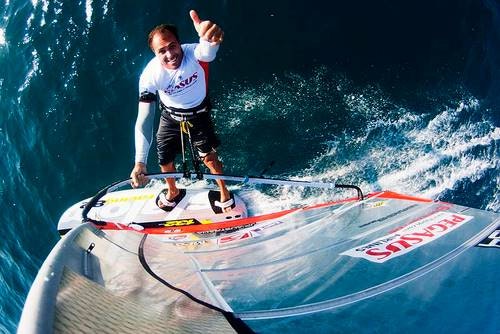 Micah Buzianis and Valerie Arrighetti claim victory on the crystal clear waters of Alacati, and Antoine Albeau secures yet another slalom world title with an...