DAY 1 – BUZIANIS SCORES TWO BULLETS TO TAKE A CONVINCING EARLY EVENT LEAD, WHILST ARRIGHETTI REMINDS JAGGI THAT THE TOUR’S FAR FROM OVER!

On the first day of competition on the beautiful blue waters of Alacati, the wind built throughout the morning to a suitable level whilst the competitors rigged and registered, ensuring two high-octane races could be completed before the end of play.

With sixty-four men and twenty-one women, the spectators gathered on the shores were soon playing witness to the amazing sight of the world’s best racers battling metres from the beach. Following the first race for the men a new elimination was scheduled, with the top twenty sailors automatically seeded through. The format had plenty of ups and downs, with potentially more racing for those in the early rounds, but some extremely busy mark roundings, causing chaos with some seasoned pros.

Former world champion, Micah Buzianis (JP, NeilPryde) fought back today with amazing speed off the line, and faultless consistency. Two firsts for the American puts him firmly at the top in Turkey, and launches his name straight back into the limelight. If he continues like this, the slalom in Sylt will be an exciting end to a great season.

Whilst the rest of the fleet lacked any consistency, the current world champion, Antoine Albeau (JP, NeilPryde) is happily hanging out in second place with a third and a fourth to his name. Although not quite a match for his usual impressive score lines, it’s a solid start to the event for the tour leader, and most importantly he hasn’t put himself out by already claiming his first discard.

Almost every other top ranked sailor had a complete mixture of highs and lows. Alberto Menegatti (Starboard, Simmer) had an amazing start to the week with a sensational performance in the first race that saw him ahead of many a world champion in second place. However in race two he couldn’t quite match his earlier form, and fell victim to the new format going out in the second round.

Many times world champion, Bjorn Dunkerbeck (Starboard, Severne, Mystic) arrived three days early, but his equipment has still failed to show up. On borrowed gear, he threw down the gauntlet with a great first race finishing just ahead of his archrival Albeau to claim third. But, his luck changed in race two when he had to rush out to the start, and on borrowed gear again didn’t quite perform to his usual high standard. Dunkerbeck remains hopeful that his equipment will arrive in time for racing tomorrow, so fingers crossed for the living legend.

Other top sailors who experienced a complete mixed bag included Australian featherweight, Steve Allen (Starboard, Severne) who was another sailor who met his end early to the new format. He was however in great company, with the likes of Cyril Moussilmani (Starboard, North), and Ben Van Der Steen (JP, Mystic) doing exactly the same.

After a successful stint in Fuerteventura, all eyes were fixed on Finian Maynard, and a convincing win in the first loser’s final kept them focussed firmly his way. However, he too fell victim to the new format, getting mobbed by a huge bunch of sailors around one of the gybes.

The 2009 women’s world champion, Valerie Arrighetti (Tabou, Loft, Mystic) sailed solidly today with a first and a third to take an early event lead, and pile the pressure on the current tour leader, Karin Jaggi (Patrik, Severne). However, it’ early days yet and with Jaggi claiming a first and a seventh, the writing is far from being on the wall.

Two other French riders also upped their game today with some consistent results that see a current France 1,2, 3. Sarah Hebert (Naish, Naish) battled hard in race one to score second just behind Jaggi, and ahead of Arrighetti. And, in race two she sailed to a similar standard to post a solid third. Fanny Aubet (JP, NeilPryde) pipped her at the post in the final race to claim second, but a fourth in race one means Hebert is in front by the smallest of margins.

An Eye On The Horizon

The forecast is looking good for the week with plenty of Meltemi winds forecast to turn up the heat! Be sure to tune in tomorrow to find out how the story unfolds. 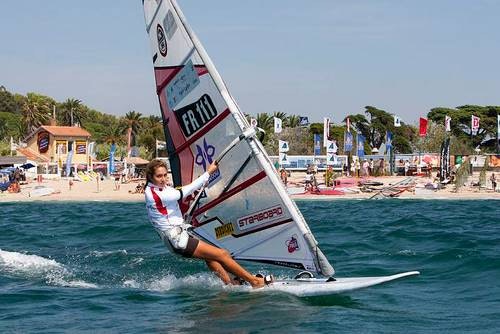 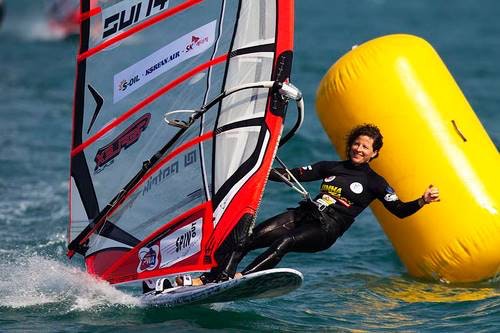