Simon Lovell makes it all the way around the island of Guernsey on his windsurf board, and in remarkable fashion too…

It was over 30 years years that Simon first tried to set a record time for a circumnavigation on Guernsey on his windsurfer and baring a 25 year sabatical he has been trying ever since!

It is only 21.5 nautical miles around Guernsey as the crow flies, but you would be lucky to sail a course of less than 25 to 30 miles.

Every year Simon looks for the perfect day to have another attempt at creating a sub 3 hour record time for the trip. Over the years he has probably had over 12 attempts with 3 incomplete attempts due to either to little wind to much wind or gear failure.

Guernsey is the second largest of the Chanel Islands situated on the southern side of the English Channel on the outer edge of the bay of St. Malo. These islands suffer some of the largest tides in the world often over 10 metres in height. The tidal range leads to significant tidal streams and rips which can exceed 6 knots and cause extremely confused seas and overfalls. In addition to this there are numerous hidden rocks and reefs and some sections of the coastline offer no landfall at all in extremes!

The island is roughly triangular in shape and by carefully choosing ones starting position and direction of travel in relationship to wind and tide it is possible to have favorable tides on two of the legs but it is hard to avoid a long beat up one of the coasts and the outer corners of the island often have strong adverse tidal rips and overfalls. When the weather forcast predicted a 12 knot breeze from the North for Saturday 14/08/2013, this years attempt was on. Over the years Simon has tried various different launch points and direction of travel around the island and this year the aim was to find a wind direction giving the shortest possible course. By making two sides of the island into the two legs of the beat Simon hoped to shorten the course enough so that outright board speed would be less important than a good average board speed to windward. For this reason the Starboard Phantom race board was selected with a Tushingham 9.5 metre race sail with adjustable downhaul and outhaul. Another secret weapon was a large weed fin!

Preparation is of course a prerequisite of any long distance sailing.

The following is a list of some of the items carried in a water proof bum bag.

In addition a GPS device in a waterproof bag on my arm to record the course and to enable rescue in case of problems.

It is a good idea to log in with the local signal station prior to any offshore sailing a giving them a contact number.

Any gaurd boat used should have experience of the reefs on the West coast.

Simon has found by experience that after spending a long time on any one leg especialy on the beats that ones balance deteriates. He believe that this is due to ones inner ear getting used to ones sailing stance. The result of this is that ones balance will get a lot worse during the course of a sail. Experience has shown him that it is better to do any down wind sailing, especially if its in confused seas, at the start of the trip when ones balance is at its best.

At just after 10am the attempt was started, leaving Ladies bay and heading in a clockwise direction around the North of the island. The fastest speed of the trip was recorded along here of 17.27knots. Once the top of the island had been rounded there was a 7 mile run down the East coast with the wind varying between 6 to 14 knots.

At the end of the run off St. Martins point prior to the start of the first leg of the beat a strong adverse tide was met and the winds became more fickle. The wind contiued to vary all the South coast for the whole of the 6.4 mile leg of the beat with the board speed going up and down between 4 and 12 knots.

Rounding the South West corner of the islands inside the Hanois light house the overfalls were not as extreme as they often can be and the wind had increased to a steady force 4.

After a few tacks up the beat there was enough water over the causeway to enable a course inside Lihou Island. The West coast of Guernsey is covered in hidden reefs and even a windsurfer can be surprised by large outcrops of granite lurking beneath the waves. The final leg of the course was through these reefs hard on the wind on port tack untill finishing by crossing the starting track inside the bay 2 hours 52minutes and 17 seconds later!

Simon says that he hopes that their will be a challenge to this record in the near future now that a benchmark has been set.

Check out more about the Tushingham team here. 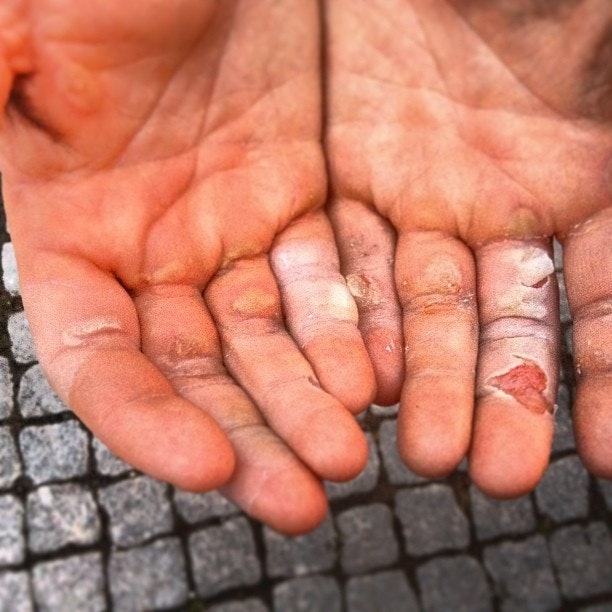