We’ve already had the full report from the Techno Worlds, now it’s time to catch up with Team GB coach Ali Yates for more details on the fantastic achievements by our young racers.

A total of 36 Brits made the trip across the channel for the Techno 293 windsurfing worlds this year held in Brest, France. The National team of 10 windsurfers, selected and supported by the RYA was headed up by Ali Masters, 2 x Techno World Champion, along with Adam Cockerill, more known in the Topper world but does enjoy his windsurfing and definitely brought his knowledge of rules and strategy into the team.

The Techno Class association also offered support and coaching to the other sailors taking advantage of a Worlds on their doorstep with a team of me, Ali Yates as Head coach along with Chloe Bennet and Matt Barton.

It was an amazing experience for all and a great championship. Over 420 windsurfers from 27 nations made it a great thing to be apart of. All of those kids, from all of those Countries all with one common interest, Techno windsurfing! The Techno 293 association puts a massive emphasis on having fun and being apart of the worldwide scene in the biggest windsurfing class and I was so proud to be apart of it.

It was great to see some British competitors in the relatively new 293 plus. This is a class for over 17’s on a Techno with the new 8.5 rig. This opened up the championship for overage sailors to keep involved with the class and join in the fun. Top Brit women went to Racheal Horton and top Brit Man went to James Barnwell. It was great to see these guys continuing in both the sport and competition beyond the 17 years old cut off.

Josh Carey from Pugneys, in the 6.8 (under 15 boys) and bronze medalist from the Europeans in Garda, Italy earlier this year had some amazing races, winning one, top 5 in others came in top Brit.

Mollie Densley Robins from Bristol Corithians Yacht Club, was top Brit in the 6.8 girls. Molly has another year to go on 6.8 and this was her first worlds so a very promising future and defo one to watch.

In the 7.8 (under 17) class disaster struck Matt Carey from Pugneys breaking his toe in the qualifying rounds and it was all about team Scotland with Erin Watson and Andy Brown both from Loch Inch holding the poll British positions. Again both young in the fleet and can do another year having gained valuable experience.

It was tough for the Brits this year as a lot of the more experienced sailors moved onto RS:X early, and to be fair due to their size, the lightwind event would have been a challenge on Techno. We talked in the TCA team alot about process goals and used the event to broaden experience of a big international and its pressures, racing in a tidal venue, understanding how current effects the race but our main focus was pre-start routine…….oh and of course keeping it fun and having a wail of a time!

Finn Hawkins from Polkerris, as the youngest member of the GBR team had the honour of carrying the GBR sign at the opening ceremony but in the closing ceremony received an award for being the youngest competitor of the competition. Aged only 11 years old he had an amazing first worlds and taking us all by surprise on his first ever international race with an 18th!

I can’t possibly mention all of the kids but am so proud of each and everyone of them, it really was a wonderful world championships. The kids were truly amazing, listened and took onboard all of the coaching we gave them. Not a single rescue due poor kit prep and those big smiles as they crossed the finish line, if there was a prize for that Molly Howell from Hollingworth, would have it for sure! The parents were an amazing team and I can’t thank them enough. So supportive and organised which meant we could get on with our jobs and coach the kids. The coaching team, with such a diverse range of knowledge and background made an amazing team. I also have to thank Helen Bennet, back in the UK, having taken on chairperson of the TCA and did all of organising and behind the scenes stuff but didnt even get to go!

As for the medals, no we didn’t get one this time, as expected the French ruled their own waters but I know the GBR team are building in strength and experience. We need the kids to be getting exposed to more coaching in addition to the RYA programme. Going fast and essential time on the water at the local clubs nationwide, so come on instructors out there carry on the great job in Team 15 clubs, dont be shy, get organising training days, even if you dont race, if you can make them windsurf fast, we can teach them how to race! Lets make lots of opportunities to get these kids windsurfing well, to take on the world, your country needs you!

Next year the Worlds are in Argentina, so I would like to thank Brest with the amazing backdrop of the bridge, and France for hosting as it did make it very accessible for a number of kids that might not be able to go again to have the opportunity of a lifetime to meet other windsurfers from around the world and to realise what a great worldwide sport we are involved in. We are waiting for confirmation for the Europeans and I will definitely be going to support the Class. I would love to be coaching again but if not, to compete in the Techno plus as I did 2 years ago in Holland. The Techno Class and windsurfing is so much fun, I just love it! The Techno Worlds recently took place in Brest, France, with hundreds of the most talented young racers battling it out for glory. Here’s a final...

The Techno Worlds recently took place in Brest, France, with hundreds of the most talented young racers battling it out for glory. Here’s a final... Want to catch up on all of the action from the Techno World Championships in Brest, France? Here’s all the videos, from every day of... 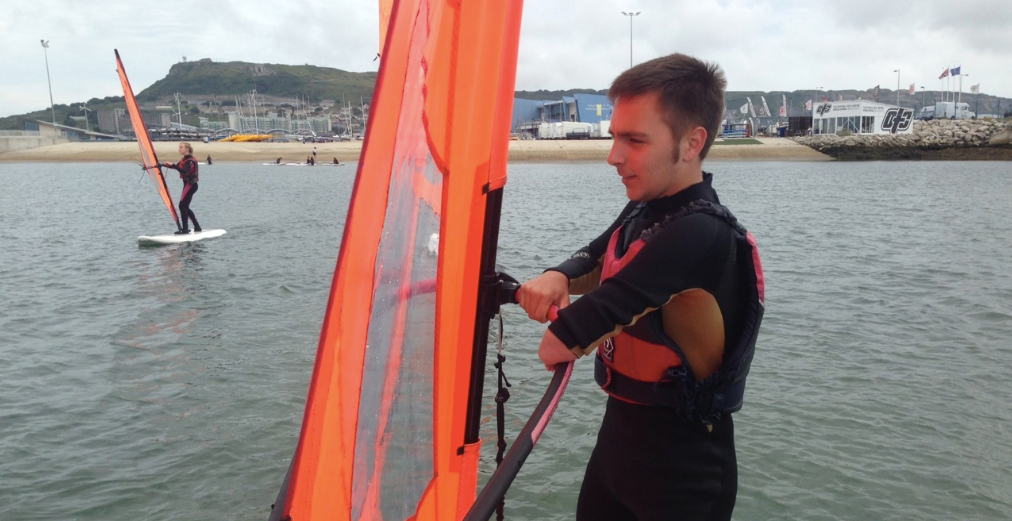 Windsurfing For The Disabled - More Inspiring And Accessible Than Ever

If someone with a disability wanted to learn to sail in this country the reaction of most people in the watersports business would be: ‘No...

Windsurfing For The Disabled - More Inspiring And Accessible Than Ever