The latest from the SWA, as the student brace to cold weather and head to Bristol for the next stop on their tour. Despite the December weather becoming increasingly Baltic, student loans seeming like a distant memory and Christmas looming, the SWA came out in full force when 140 windsurfers descended on Bristol for the infamous BrUWE: Wet Dreams 5 event last weekend, jointly hosted by UWE and Bristol Universities.

Following the arrival of students from 15 different universities on Friday evening, after a quick introduction to their hosts, they arrived in town for the traditional “quiet” night out. This quickly evolved into a night of carnage both on the dance floor and off.

After emptying our memories and bank accounts the previous evening, the smell of bacon could not be more welcome to many. With sore heads and shameful faces, the students arrived at Bowmoor Lake on Saturday morning ready for a full day on the water. With the wind on holiday, we had some top notch tuition running for beginners and intermediates throughout the day. Ollie Acton and Alex Mitchell kindly provided some swanky toys and demo kit from Patrik Diethelm UK and Sailloft to play with for the braver of the free sailors and the Boardwise Van was on hand with some super sexy demo kit and wetsuits to try and buy.

The eagerly anticipated hot lunch cooked up by Bowmoor Sailing Club ensured even more powering through, with many free sailing despite the lack of wind getting some practice in for the advanced races the following day. Intermediate races were held on Saturday afternoon, with some great results for a number of new competitors in the series. Alun from Solent (in a recent Boards poll the SWA’s sexiest windsurfer) took the lead after seven very competitive heats. As the light fell, kit was packed away and they the SWA headed back to Bristol to refuel and regroup for the evenings events. Some tactical power napping was employed, food eaten, and final fancy dress preparations were made.

The theme of American Fantasy went down a storm, with everything from Team America to Mardi Gras, Soccer Players to NASA. Wees bar welcomed with open arms and a fully stocked bar, UWE’s DJ Silecta banged out the tunes to provide a soundtrack for some epic dance-offs, and a full power party all night. 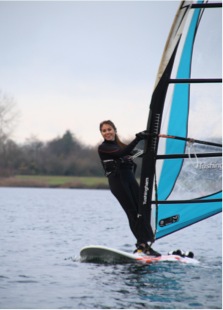 Enough tea and bacon for an army helped us along to the lake Sunday morning, eager to get racing as the wind came out to play. With a crowd growing, we began the day with the beginner racing, swiftly followed by team racing, advanced racing, and a freestyle contest. With some never before seen close finishes in the advanced racing, thanks to Southampton’s John James-Hamilton and Ben Page, spirits were sky high.

Sunday afternoon culminated in the annual BrUWE jelly wrestling tournament, with Southampton’s Filip Markiewicz and John James Hamilton getting stuck in to win the much contested title of ultimate jelly Wrestling Champion (declared a draw due to the lack of rules to define a win.) Gratitude was then shown for a great weekend to a fully clothed event organizer (Roisin Greenup from UWE) by throwing her into the jelly pit. Massive thanks to Bowmoor Sailing Club for hosting the event and the wonderful sponsors Boardwise, Patrik & Sailloft for providing the demo kit. Finally thank you to UWE’s Windsurfing and Kite club for organizing the event and providing an untouchable safety fleet, and some fantastic windsurfing tuition over the weekend. PEDS (Post Event Depression Syndrome) has set in and nobody can wait until the New Year and the remaining events in the SWA series see you all there!