What does it feel like in the eye of a raging storm? The 2006 Red Bull Storm Chase Europe created the concept of windsurfing genuine storm conditions. This time it’s going global. By hunting down three massive storms anywhere in the world, the 10 best athletes will battle for the crown of ultimate storm windsurfer.

The contest format is simple: 10 riders compete in the first mission. Six of them advance to mission number two. In the final mission the top four riders will battle for the ultimate Storm Chaser’s crown. To guarantee raging conditions, Red Bull Storm Chase 2012 will be mobile to the max, with a  four month holding period and just 48 hours to mobilise riders and global contest crew on-site before the storm strikes. The starting flag goes up when the winds exceed 10 Beaufort (54 knots / 100 kmh / 62 mph).

So, who’s involved? 80 sailors are already registered, including current world champion Philip Koester, but the Brits and the Irish are putting up a strong show too, with many of the countries best getting involved and needing your support to get them into the final 10.

Current BWA tour leader Phil Horrocks, Chris ‘Muzza’ Murray, Adam Lewis, Dan Gardner and Mikey Clancy are all hoping to make it into the final show down, Boards finds out more from the boys about why they deserve a spot and what the competition could entail.

Spot recommendation: I would like to see it hit the mainland UK shores, usually the further north you go the wilder it gets, so if it’s not Rhosniegr then heading to the outer Hebrides, on north coast of Scotland can have it pretty epic. I guess if we’re looking at places with Storm force 10 winds we’re looking at side/side onshore spots where the jumping will be incredible, so you have to think of a spot that can handle conditions like that. Rhosniegr’s a classic for that.  It might be good finding epic side offshore waves but in that kind of wind you’re going to be limited for spot choice, I think it’ll be all about going big air!!

Who would you like to see enter:  Koester’s the man for big jumps in Europe but there’s a whole bunch of crazy people out there who can make it interesting too!

What would be biggest fear be, if you make it through:  I think when it’s as windy as that, when things go wrong, they go wrong super fast!! And it’s usually in the air! In similar winds I once had a pushloop go wrong, and I double pushlooped it! luckily I landed on my back in the water, not on my equipment!

Biggest/craziest day windsurfed: the strongest winds I ever sailed i think was here in Rhosniegr, I remember one time it was off the scale, just spray everywhere, it wasn’t just sand blowing on the beach, it was the whole beach blowing! I was surprised there was any sand left the next day!!  The waves were big and gnarly, just keeping the board on the water was an epic challenge, the gear just literally flew away all the time!!

Biggest move landed: I’ve had some good ones in my time, I suppose doubles and pushloop forwards are up there, but when it’s super windy like that it becomes more about control, and moves like huge forwards give you a real thrill!

Why you deserve a spot in the comp:  I’m used to sailing in strong winds on the west coast of Wales and more so know for my sailing in South Africa I suppose, where it can be super windy, and I’m usually the guy in the gnarliest spot!!  So if you want someone to go big when it’s big, I’m your man!! 😀

Spot recommendation: Gwithian goes off in a storm.

Who would you like to see enter: John Hibbard! Bring him back for his encore!

What would be biggest fear be, if you make it through: Fear ha ha, it’s my middle name!

Biggest/craziest day windsurfed: Gwithian 50 year storm when I was 17 was a massive day, still the biggest waves I have seen hit the UK.

Why you deserve a spot in the comp: I would try to entertain everyone all the way along the journey.

Spot recommendation: Hanstrolm in Denmark. For me its one of the best places to storm windsurf in the world, that place goes off!!!

Who would you like to see enter: Koester, I want to see a triple forward!!

What would be biggest fear be, if you make it through: I’m not sure what my biggest fear would be, I guess breaking my gear or not being able to show what I can do. The rest of the stuff is what you look forward to when sailing in mental conditions!

Biggest/craziest day windsurfed: Probably the PWA event in Klitmoller, but sailing Hanstolm in the evening. It was 3.7 totally overpowered and mast and a half plus, super gnarly, but so so much fun!! Every time you were heading out you’d think you were safe, out back and then a North sea monster would explode just next to you! Epic!!!

Why you deserve a spot in the comp: It’s my dream! Ever since I started windsurfing I always looked for windier and windier conditions, it’s those kind of days you look forward to.

Spot recommendation: Right…now thats a toughy!! We get some pretty made conditions here and there’s plenty of place that can go off on anyone day. Usually up north would be a safe bet as it can manage large swells and wind. Sligo or Donegal would be a winner I reckon.

Who would you like to see enter: Finn Mullen and Robert C Jones would kill it. Mullen is a nut job for big surf. And Rob, he may be small but jaysuz he can sail when its nukin.

What would be biggest fear be, if you make it through: Being underpowered??? Probably breaking gear. Hard not having the gear you want when itis windy and you have no spares…

Biggest/craziest day windsurfed: Sailed a 60knot day over a year ago. Only sailed a sheltered beachy but christ…I’m not a small guy, never used a 3.0 before, and it was the most over power I have ever been. Great craic really…

Biggest move landed: Stuck a odd double a while back. One handed goiters, big backies and some massive stalled forwards.

Why you deserve a spot in the comp: It would be good to show everyone that Ireland have some very good sailors out there, going nuts when the conditions are nuts. And I think I would be a good candidate to represent…

Spot recommendation: West coast of Ireland definitely has to be on the list. It has been well documented by the Surfing world with a couple of nominations for the Billabong Big Wave Awards this year alone. There are many days with crazy storms and swells which are picture perfect for the storm chase. However, as most of the guys here know the difference in sailing in conditions and waves like this is rugged and difficult.

Who would you like to see enter: I’d like to see all the big names of the sport with a good mix of young talent, people who windsurf all year in these types of conditions too.

What would be biggest fear be, if you make it through: Well, for me it would definitely be my personal safety, I mean the conditions that we will be sent out in are extreme, days you wouldn’t want to put your cat out in. Part of sailing the storm in the survival aspect that you can push yourself again everything that nature is throwing against you. Survival is an innate characteristic we as humans are born with and that’s what the best thing will be about the storm chase, to sail and conquer extreme nature.

Biggest/craziest day windsurfed: The windiest day I ever windsurfed took thee of us to close the van door. I questioned my sanity going out that day.

Why you deserve a spot in the comp: Unlike many sailor who escape the depths of winter, with college I am forced to be in Ireland throughout winter and storms like we will have for the Red Bull Storm chase is what I lot to sail in. The wetter, windier and wavier the better!!

Other sailors entered include:

and Richard Potter – Latest edition to the Brits!

Find out more on the Red Bull Storm Chase website 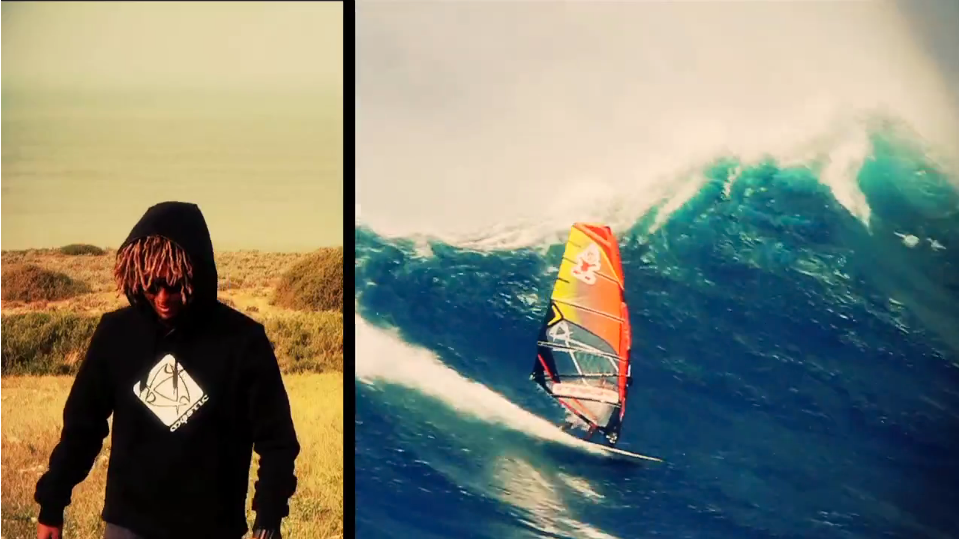