The road to 2012 glory has just got one step closer for some of the nation’s top sailors who today (20 September) became the first British athletes to be officially selected to compete for Team GB at the London 2012 Olympic Games.

Ben Ainslie, the triple Olympic gold and silver medallist and Britain’s most successful Olympic sailor, heads the list of 11 athletes confirmed by the British Olympic Association as being on the startline at Weymouth and Portland for next year’s sailing events.  Sailing is the first of the 26 Olympic sports to have officially selected any of its athletes, with the 11 sailors revealed today at the Old Royal Naval College, Greenwich, competing across seven of the ten Olympic classes and representing a mix of both established Olympic medallists and first-time Olympians.

Ainslie, 34, has earned the right to race for his fourth Olympic gold in 2012, gaining selection in the heavyweight Finn dinghy event, while Iain Percy will aim for a third gold in total and a second in partnership with best friend Andrew Simpson in the Star class with whom he won the Olympic title in Beijing.

Paul Goodison will look to defend his Laser class crown on his home waters of Weymouth and Portland, while Nick Dempsey and Bryony Shaw will look to build on their respective Olympic bronze medals in the RS:X Men’s and Women’s windsurfing events (Dempsey, Athens 2004; Shaw, Beijing 2008).

The 2010 World Championship-winning trio of Lucy Macgregor, Annie Lush and Kate Macgregor have earned the nod to race at their first Olympic Games in the Elliot 6m Women’s Match Racing event – a new event on the 2012 programme – with Lucy and Kate the first two sailing sisters ever to compete for Great Britain at the Olympics.

A whirlwind seven months after teaming up and following a string of podium finishes, Olympic debutant Hannah Mills and Beijing Olympian Saskia Clark have earned the confidence of the Royal Yachting Association selectors in the 470 Women’s event. Mills joined forces with Clark in February 2011 following the retirement of Clark’s former helm Sarah Ayton.  Selection trials are ongoing in the remaining three Olympic classes – the 470 Men, the 49er and the Laser Radial events.

Team GB Chef de Mission Andy Hunt commented: “This announcement is a key milestone and an exciting and important moment for us – it represents the beginning of the creation of Team GB, Our Greatest Team of approximately 550 athletes. Having the first athletes confirmed for Team GB for the London 2012 Olympic Games is fantastic. The eleven sailors are a good mix of experience, including six Olympic medallists, as well as promising Olympic debutants who are World or European medallists in their own right. There is certainly some fierce competition within sailing and there are no free passes to compete for Team GB in any sport in London 2012. In fact, in terms of overall depth and talent, we believe Team GB in London 2012 will be the most competitive British Olympic Team in modern history. Our aspiration for Team GB in London 2012 is to win more medals across more sports than for over a century.”

RYA Olympic Manager/Team GB Sailing Team Leader Stephen Park (from Helensburgh, Scotland) added: “We’re delighted to be announcing the first sailing members of Team GB. All the sailors selected today have had a fantastic year of performances which has resulted in them gaining selection at an early opportunity, allowing them good time to focus their campaigns specifically on the challenges of Weymouth Bay and Portland Harbour in preparation for the 2012 Games.   The mix of experience we have with the six Olympic medallists, one Olympian and four first-time Olympians provides an exciting balance that will hopefully deliver the required results in 2012 while at the same time increasing the pool of 2016 Olympic triallists.”

Bryony Shaw (born: Wandsworth, grew up in: Oxford; currently living in: Tunbridge Wells)said: “For me this will be my second Olympics, and it’s exciting that I’ve been able to keep on improving. It’s amazing to be part of such a strong and special team and to feel the vibe that we’re all focussed and confident with the task ahead.   To earn my selection by winning medals in Weymouth was the main focus for me and it’s given me great confidence to have been able to do that, and gives me a great feeling that I can perform there. My windsurfing has transformed, everything is on track and we’re pretty confident that there are some more gains to be made on the physiological side.”

Nick Dempsey (born/grew up in: Norwich, Norfolk; currently living in: Weymouth, Dorset) added: “It’s great to have gained selection, but really it’s just another step on the way. You still get the feeling that it’s the start of the build-up, and little things like starting to get your bits of Olympic kit are quite exciting and bring home how close it’s getting.   “This is my fourth Olympics, and this one is just everything to me. It’s the one – the Games that I’ve been waiting for my whole life. You’re never going to get better than winning an Olympic medal on home waters. I’ve performed really well in Weymouth this year but there are still some big gains to be made, so everything for me is about preparing for Weymouth and fine-tuning everything – learning more, getting fitter, stronger and faster.”

Click www.rya.org.uk for further information on the selected sailors.

After attempting to run the Harbour Dash the previous weekend and not getting a whiff of wind (albeit breaking the record temperature for October!), the OTC... 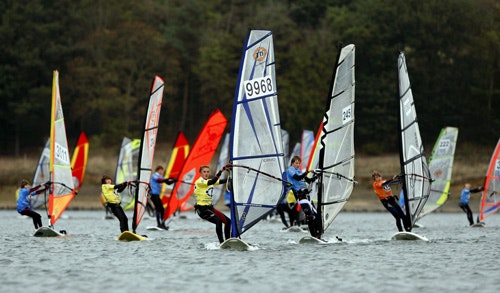 A hundred young windsurfers from nine teams across the UK, took to the water at Pitsford Reservoir this weekend (08-09 October) to compete in the...

Ant Baker of the Baker Academy has released details of his forthcoming Ultimate Speed and GPS Clinic during Weymouth Speed Week 2011 When: October 15-21...

After attempting to run the Harbour Dash the previous weekend and not getting a whiff of wind (albeit breaking the record temperature for October!), the OTC...

A hundred young windsurfers from nine teams across the UK, took to the water at Pitsford Reservoir this weekend (08-09 October) to compete in the...

Ant Baker of the Baker Academy has released details of his forthcoming Ultimate Speed and GPS Clinic during Weymouth Speed Week 2011 When: October 15-21... Project Windsurf-UK, a brand new initiative dedicated to windsurfers across the country, was officially launched last weekend (3-4 September) at the National Windsurfing Festival at...