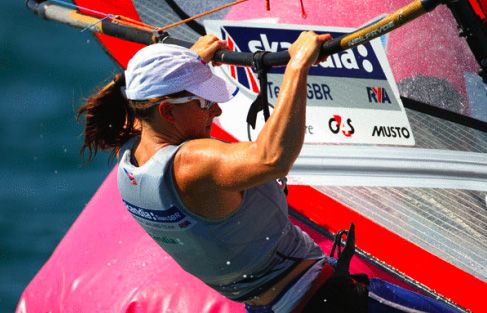 The Women’s RS:X competition was delayed  by a lazy “Fremantle Doctor” sea breeze this afternoon, with races starting an hour later than scheduled.

But once underway, the wind blew in unexpected results in the Yellow Fleet, with Pepa Mavrodieva (BUL) winning race one. But an 18th in the second leg saw her end the day in 17th place.

Jessica Crisp (AUS) had a below-par race one, finishing 21st in the Yellow Fleet but recovered well to win the second race and place 20th overall.

Race one saw world No.1 Blanca Manchon (ESP) sidelined to 19th place. Manchon’s poor result continued into the second race in which she finished 23rd , placing her 46th overall.

Manchon’s compatriot Marina Alabau (ESP) had a much better day with a third and an 11th to finish in twelfth place overall.

The Chinese team thrived in the afternoon’s light winds, with all four of the country’s athletes placing in the top ten in their fleet.

Flavia Tartaglini (ITA) displayed a strong hold in both races, taking a second and an eighth, while France’s Charline Picon climbed from ninth to third.

In the Blue Fleet, wins for Lee Korzits (ISR) and Laura Linares (ITA), and solid results in their other race, had the two sailors high in the progressive results.

But Bryony Shaw (GBR) recorded a second and a third to share the overall lead with Korzits.

By the time race two started for the blue fleet, the Fremantle Doctor had settled to a steady 15 knots.

Races three and four for the RS:X fleet will be sailed on Tuesday, 6 December.