In near perfect conditions, sunshine and lots of wind it was victory for the North Zone Champions the North Lincs Invaders this weekend (9-10 October) as they reclaimed their title of Team 15 (T15) Champion Cup winners and lifted the 2010 trophy

After dominating throughout the season in their regional heats the Invaders clinched their place in the final and were determined to reclaim the Champions Cup. North Lincs coach Mark Butler commented “It is absolutely fantastic. We won last year and the kids have all been training really hard in preparation. We feel really great and we are chuffed to bits to be taking the trophy back home once again.”

With a change of venue for 2010, Northampton Sailing Club at Pitsford Reservoir, the event saw over 100 young windsurfers in nine teams hailing as far afield as Scotland and Cornwall take to the water. There were some new faces at this year’s event including East Zone’s Norwich Force Eighth attending the final for the very first time. In Team15 spirit they were made to feel very welcome by all the competitors and proudly chanted their motto wherever they could: “Norwich Force Eighth- small but mighty!”

The competitors whizzed around two courses in four different classes 3.5m, 4.5m 5.8m, and Techno 6.8m competing in nine different races and one fun race to round up the weekend.

T15 Manager Gillian Wright commented “This year’s Team15 Champions Cup has been absolutely brilliant. The kids have been working really hard out on the water and they have all had a fantastic time.

“We have been in a new venue this year, it’s a lovely piece of water and they have really looked after us.  The standard of sailing has been really high and each year the competition goes from strength to strength. We will be looking forward to next season starting again in April/May 2011 and we hope to see even more youngsters windsurfing with Team15.”

Winners the North Lincs Invaders picked up a ProKids Formula Board for their club courtesy of Tushingham/Starboard with other prizes coming from Neil Pryde, and Windsurf magazine. All the competitors were also presented with goody bags from Animal who sponsored the event.

Special merit awards were given to Spray Sprite Heidi Jabbari and Lucy Budge from the Norwich Force Eighth. The Oxford Zoomers picked up prizes in the fun race and the North Lincs Invaders also won the quiz.

Tom Sylvester from the Roseland Waveriders said “The Champions Cup has been brilliant. It involves everyone from the younger ones who are just beginning right up to15. I am now in my final year and Team15 has been so good. I love getting out in the wind and getting the speed going.

“My advice for other youngsters who want to windsurf is to find a Team15 club, join as quickly as possible and get out on the water lots.”

Spray Sprite Heidi Jabbari said “I love taking part in a sport that is different and I want windsurfing to be a part of my life. I will definitely keep sailing after Team15.”

“One of my favourite things is the BBQ after windsurfing and meeting other people at the Champions Cup, the other teams are really friendly”

Watch Izzy Hamilton get back to the front of the women’s fleet and Connor Bainbridge break into the top 3 men at the 2010 RS:X Youth...

On 16th October 2010 at Rutland Watersports Centre at Whitwell, the interim committee of the TSG was ratified at an Extraordinary meeting and are now... Twenty four school children from Brighton and Hove have been lucky enough to learn to windsurf this Autumn term in a joint partnership between Lagoon...

Watch Izzy Hamilton get back to the front of the women’s fleet and Connor Bainbridge break into the top 3 men at the 2010 RS:X Youth...

On 16th October 2010 at Rutland Watersports Centre at Whitwell, the interim committee of the TSG was ratified at an Extraordinary meeting and are now...

Twenty four school children from Brighton and Hove have been lucky enough to learn to windsurf this Autumn term in a joint partnership between Lagoon... 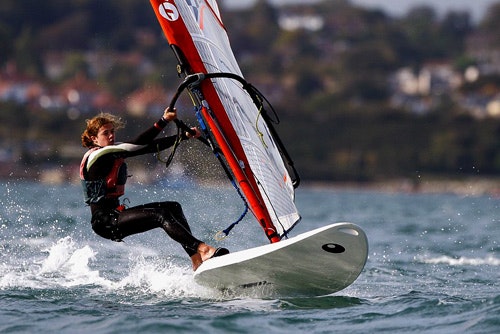 The cream of UK windsurfing talent is poised for battle with over 80 windsurfers going head-to-head this weekend (2-3 October) at the annual RYA/UKWA National...