Hosted on the Ballena Alegre camping resort, the entrants all stay on-site in bungalows surrounding the race HQ, and just 50 meters from the beach.

Competition opened up straight away as the local Tramontana wind turned it on directly after registration. The race crew laid down an enormous four-gybe downwind course, to test the world’s best to the maximum. Winds blowing 30 knots ensured 7 races could be completed in the first three days and a further elimination was spread out over the remainder of the event.

Battling through the high winds Antoine Albeau (JP / NeilPryde) managed to secure himself a massive lead, taking the top position in the first four rounds. As the week progressed the conditions calmed allowing Bjorn Dunkerbeck (Starboard / Severne / Mystic / Dunkerbeck Eyewear) to return to form, nabbing a pair of firsts of his own. Not wanting to lose out on his event winner status Albeau put in a stunning performance, absolutely dominating the 7th race.

The conditions really backed off for elimination 8, spread over three days. It wasn’t until the closing hour of the competition that Catalunya provided winds strong enough to compete. With little to lose Albeau looked to be taking things easy.  Dunkerbeck came in second, enough to boost his ranking at this event and hold onto the series title. Special mention has to go to Alberto Menegatti (Starboard/ Gaastra) for winning his first PWA race.

The big names returned to Catalunya to prove that experience pays, off easily cruising through the early heats. Dunkerbeck fell victim to a crashed gybe at the first mark of the semi-finals and failed to qualify for the winner final.

With Dunkerbeck missing in the winners final Antoine Albeau took the opportunity to get a notch on the bed post and mark his return, having played second fiddle to Dunkerbeck in the previous two events.

Peter Volwater (Fanatic / MauiSails) and Josh Angulo (Angulo / Gun / Dakine) claimed first place positions all the way to the winner’s final where they went on to take third and sixth place respectively.

Dunkerbeck took two big hits in the semi-final resulting in a broken mast and again missing out on a place in the winners final.

The loser’s final saw the Tramontana hitting speeds of 30 knots at the start line catching many of the sailors out who were still on their big gear. The sailors were barely able to hold on as they blasted around the course.

Albeau cleaned up in the second elimination by sailing the perfect round, securing first place in each heat and a well-earned victory in the winner’s final.

Costa Brava delivered a day to remember with a cross shore breeze blowing well above 40 knots. Complex slalom conditions took the sailors to the limit. Many of them struggled to complete the course in the early heats; with gear too big, the wind proved too much to contend with.

Cyril Moussilmani (Starboard / North) put in a sterling performance, his childhood high wind experiences obviously paying off, as he took down challengers heat by heat.

Albeau pushed the start hard in the winner’s final but a drag race down the straight put Cyril in first. Albeau’s spectacular gybe saw him take the inside line and distance himself from the rest of the pack. It came down to Cyril and Pascal Toselli (RRD/ Point- 7) to fight it out for 2nd and 3rd.

The wind was still howling for elimination 4 but by this time the sailors were well tuned into the crazy conditions.

The loser’s final was a really tidy affair. Faultless sailing in this heat kept the pack really close together until the final marks. Julien Quentel (RRD / NeilPryde) battled his way to the winning post closely followed by Micah Buzianis (JP / NeilPryde) and Ludovic Jossin (Loft).

Dunkerbeck’s debut in the winner’s final saw him off to a slow start but his spectacular sailing saw him push past the fleet into 3rd place. Ben Van Der Steen (Starboard / Loft Sails / Mystic) erupted out of the starting gates, but he was unable to match Albeau’s straight line speed. Albeau stole this race with a win well over 100m.

The Tramontana dropped it down a notch for day three’s racing, providing much more comfortable conditions for the sailors to compete in.

Angulo’s demise came early on in the losers final before they were even racing; his premature start ensured an early exit. Benoit Moussilmani (Tabou / Simmer) took first place having dueled all the way to the finish line with Toselli.

An electric final marked the return of Dunkerbeck. Timing the start to perfection he flew in front of the fleet. Albeau’s attempt to take his inside line only resulted in a loss of speed. It came down to a man on man showdown at the final mark where a stunning gybe from Dunkerbeck forced him up front providing him with enough ground to win.

Reduced winds put the sailors on their biggest gear racing on sails around 8.6m for elimination 6.

The winner’s final saw the sailors take it easy on the start line, not wanting to make a mistake at this crucial point in the competition. Buzianis took the lead around the first mark, drama came when Albeau dropped his gybe causing Dunkerbeck to pile into the back of him. Buzianis, Volwater and Van Der Steen led the charge around the second and third marks. Dunkerbeck managed to gain enough ground in the upwind bank to turn on the after burners and boost his position from 6th-1st.

Van Der Steen and Cyril Moussilmani’s early demise saw them open up more room for Dunkerbeck to make it into the winner’s final.

Three men stole the show in the losers final; Angulo’s aggressive start put him in the lead early. Ross Williams (Tabou / Gaastra) and Pierre Mortefon (Fanatic / North) fought it out for 2nd and 3rd until the fourth mark. Williams’s return came on the final straight taking down Angulo and Mortefon.

Albeau stormed the winner’s final of elimination 7 opening up a tremendous gap early on; this race was his from the start.

Spread over three days, elimination 8 fell victim to inconsistent conditions. The sailors waited patiently for the thermal to kick in each afternoon. It wasn’t until the closing hours of the competition that Catalunya provided enough wind creating a turn in the results.

Menegatti managed to bag his first PWA race leaving Dunkerbeck to take second moving his event score up a notch whilst knocking Cyril Moussilmani (Starboard / North) down into fourth.

“I am feeling good; this is the first event I have won this year. I did really well at the beginning winning four races in a row, and then a 2nd and 3rd. Today was hard so I didn’t want to push too much. Now I am feeling confident for the rest of the season”

Back on the road

The PWA team will now be heading over the pond to the beautiful island of Bonaire for round three of the Freestyle world cup taking place on Jun 12 – Jun 16 2011. The island’s trade winds provide perfect, steady conditions for flat-water sailing in beautiful Lac Bay, where shallow waters and a clear sandy bottom will provide an excellent environment for the world’s top freestylers to do battle. 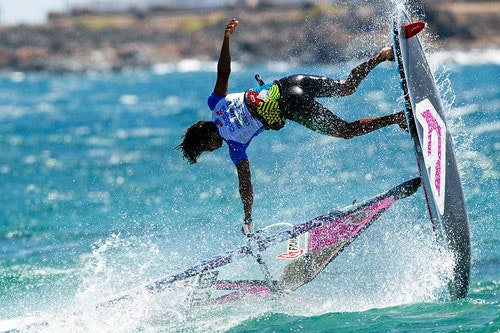