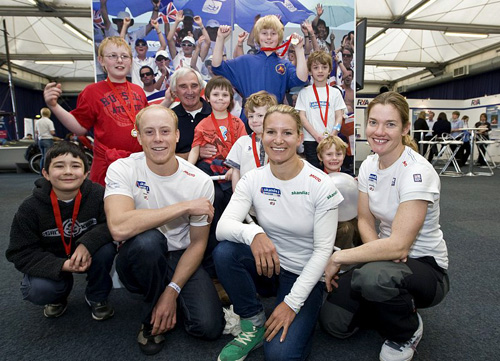 The concept was to create a supporters club worthy of the greatest sailing team in the world, with the new website www.skandiateamgbr.com/supportcrewproviding a platform for all the latest video, images, blogs and exclusive behind the scenes access to the world of Skandia Team GBR. Track the team around the globe through the latest Geofile mapping technology, and load your own images into the ‘Supporters Gallery’.  Each month there will be exclusive competitions, videos and blogs, and the community can vote for their “Sailor of the Month”.

While the British sailors hope to have amazing prospects for podium places at London 2012, they can be sure they have the backing of many past successful Olympians who know more than anyone what it takes to succeed.   Read exclusive interviews with past Olympians such as Ian Walker, Rodney Pattison,Adrian Jardine, and Mike McIntyre to see their views on sailing’s prospects for 2012, what their own experience of the Olympics was like, and what they are most looking forward to in 2012.

Kicking off the series is Olympic silver medallist Keith Musto, who hit the headlines at Tokyo 1964 when he and crew Tony Morgan claimed Britain’s only sailing medal of the Games; a silver in the Flying Dutchman two-person heavyweight dinghy class. A year later Keith established the Musto sailing brand and now, aged 74, he is retired from the Musto business and is more likely to be found at the helm of his motorboat than a dinghy.

An exciting new feature on the Support Crew website will allow members to follow the team all over the world through the use of Geofile technology.  All blogs, videos and tweets will be posted live online through an interactive map, so you can stay right on the pulse of what’s going on all over the globe 365 days a year.  Supporters will also be able to load their own images in their very own supporters club gallery.

Sailor of the Month

Supporters will be able to have their own say and cast their vote on some of the outstanding achievements of the squad each month.  Skandia Team GBR managers, coaches and support staff will nominate 3 sailors/crews each month for supporters to vote for in this new interactive feature.

The coaches and managers at Skandia Team GBR, including team manager Stephen (Sparky) Park, will provide their exclusive view as to the runners and riders each month, helping everyone keep up to date with who to watch and where Skandia Team GBR are going to be defending their titles in 2010.

2010 will see many great regattas, but running throughout will be the ISAF Sailing World Cup series. Skandia Team GBR squad members will be looking to defend their titles or improve on last year’s results, track who’s moving up and who’s moving down each month with this new feature.

The Support Crew aims to bring you the very latest video reports from around the world, including all the training camps and competitions, but more importantly it will provide exclusive behind the scenes access to the team. Catch up with team members in the new “On Deck“ feature, and stay up to date with all the latest news from the team around the globe.

“This is really the start of our engagement with Skandia Team GBR’s supporters and hopefully potential future supporters in the lead up to 2012,” said the RYA’s Olympic Manager Stephen Park of the new initiative.

“We have always received a fantastic level of support from the public, but now, at this unique time for British sailing and British sport, we wanted a platform that allowed us to share our journey with them. We hope we have created an exclusive community worthy of the world’s best sailing team!”

Park continued: “It has been created with the fan in mind, allowing interaction and providing content that will be exclusive to the Support Crew.  We hope it will give a new insight into our team and will be a great tool with which to follow our progress all over the world as we head towards Weymouth in 2012.”

Show your support for the world’s greatest sailing team and sign up now at www.skandiateamgbr.com/supportcrew With ‘the coldest winter in 30 years’ finally behind us and the ice and snow a rapidly fading memory, many people will be looking forward... Bryony Shaw to launch National Windsurfing Week at the RYA Dinghy Show! The British Olympic windsurfing medalist Bryony Shaw, who aims to be representing the...

With ‘the coldest winter in 30 years’ finally behind us and the ice and snow a rapidly fading memory, many people will be looking forward...

Bryony Shaw to launch National Windsurfing Week at the RYA Dinghy Show! The British Olympic windsurfing medalist Bryony Shaw, who aims to be representing the...