The 4th WWEC event took place in Latvia, Pļaviņas last weekend and also counted as the Latvian National Championship . Winter windsurfers from Latvia and Lithuania participated in ‘WWEC 2010 Mežezers’ and had all sorts of fun in the Mežezers sports complex. Some riders had packed their course racing kit but unfortunately the wind wasn’t strong enough for the thick layer of snow that covered Lake Odzes. The conditions for slalom discipline were ok, and even a snowstorm didn’t stand in the way on the first day . There were 9 races on a figure-of-eight course. On the second day there was no wind for winter windsurfing but instead downhill skiing fun race was organised where everybody including families and friends took part. The overall results of WWEC 2010 before the last event this season are published at www.winterwindsurf.com. First four places currently are divided among Latvians – the first position belongs to Edgars Liepiņš, but with few points missing, the second is Jānis Preiss and the third is Aleksandrs Ļeontjevs. More pictures and information at the official WWEC 2010 homepage: www.winterwindsurf.com 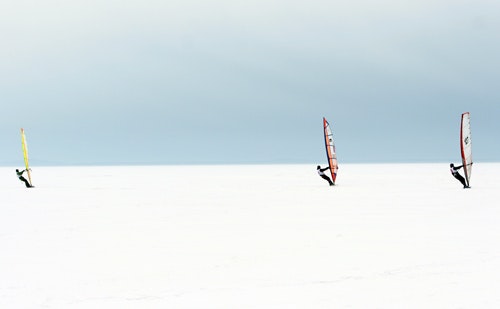 The second European Cup event WWEC 2010 Vente in Lithuania  took place last weekend in cooperation with Extreme-sports. There were races in both disciplines so competition for...

The second European Cup event WWEC 2010 Vente in Lithuania  took place last weekend in cooperation with Extreme-sports. There were races in both disciplines so competition for...