On the 26 January the annual Stormrider ‘Effect’ wavesailing cup took place at the famous Bat-Galim beach in Haifa, Israel. The wavesailing contest was held for the 9th successive year attracting Israel’s leading wavesailors, such as PWA regular Arnon Dagan (ISR-1) and former Maui resident Eyal Shelef (ISR-43), along with many other famous local sailors and young up-and-comers. The contest runs on an invitation-only basis and has a waiting period of two weeks to ensure it’s held in the best possible conditions. The annual venue for the contest is Israel’s best wavesailing beach, Bat-Galim in the city of Haifa. The beach offers supreme port tack and cross to cross-off waveriding conditions in almost every swell and wind combination. This year the contest was organised by the veteran sailor Shachar Gal, who put in a lot of effort to raise sufficient funds, verify good media coverage and summon the desired conditions… This year, he really outdid himself by assembling a most professional judging crew and arranging excellent perks for sailors and spectators alike (such as tasty refreshments and a giant hot-air blower to keep everybody warm). The contest started up with the juniors, as a group of young sailors from all over the country got into the water first, enjoying a strong (if sometimes gusty) wind. Yarden Meir won the final, with an impressive display of aerial antics, including a shaka and some high forward loops. Yarden, a freestyle specialist who usually competes in the flat water of the European Freestyle Tour (EFPT), was thrilled to sail the Bat-Galim beach for the first time – and since he comes from the southern city of Eilat he doesn’t even own a wetsuit! Lucky for him, a fellow surfer lent him one, and the onshore conditions which favored jumping over riding gave him with a decisive advantage. The Open competition was up next and the competitors had to endure weather conditions ranging from 15 to 30 knots of cross-onshore winds and 1-3m waves. Weather conditions weren’t going to be easy, or consistent, as with each new front of clouds the wind would swing onshore and blow hard for some time before the rain caused its speed to decrease, making it hard for all involved in the contest – officials and competitors alike – to do their job. Despite the difficult and unusual conditions (the beach usually boasts world-class waveriding conditions in the winter storms), the first rounds progressed with no major upsets as the younger sailors lagged behind the more experienced veterans. Notable performances were made by both local hero Ori Dagan and Israel’s wavesailing legend, Gadi Meets. Both sailors, already in their forties, gave the younger generation something to aspire to, as they surfed wave after wave progressing through their heats. The semi-finals were held in challenging conditions – cross-on 15-25 knot wind and 2m waves, making equipment choice crucial. Two sailors clearly in tune with the conditions were previous event winner Adi Zomer and former Maui resident Eyal Shelef, who put on a dazzling display of jumps and backside waverides to finally go on to the final. 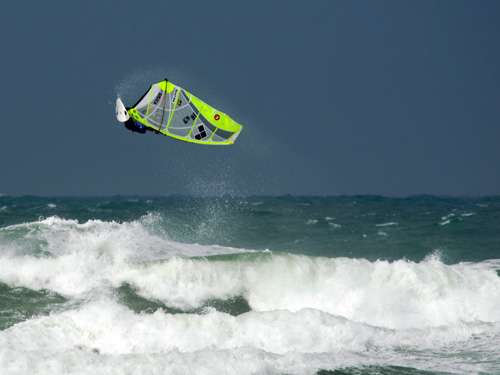 So, after a gruelling day, it came down to the final heat, which starred Eyal Shelef’s Vs Adi Zomer. In the dying light and under a beautiful rainbow, it was Shelef who, despite being a hardcore starboard tack riding specialist, made the best of the dying wind to clinch his victory. Unlike regular surf competitions (where the winners are immediately declared), the contest organiser had a novel idea – the prize-giving would be held at a pub, on a weekend night with free drinks for all! This didn’t go unnoticed by the sailors, their friends and family members who all filled the bar, aptly named ‘Inigo Montoya’ – and just like the movie, you had to be prepared (to party) if you wanted to get in. After the initial speeches, it was time for prize-giving, where a very happy Shelef received a giant Buddha statue trophy! 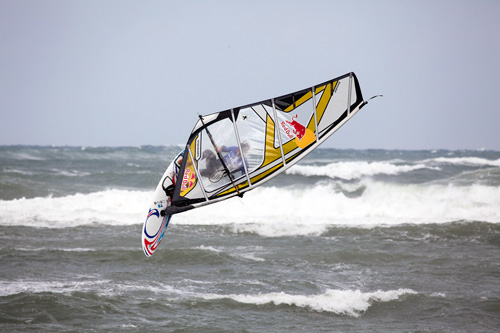 In addition to the usual prizes, the event organiser decided to hand out an additional prize for the best trick – to PWA regular Arnon Dagan, who won with a massive, clinically executed push-loop. 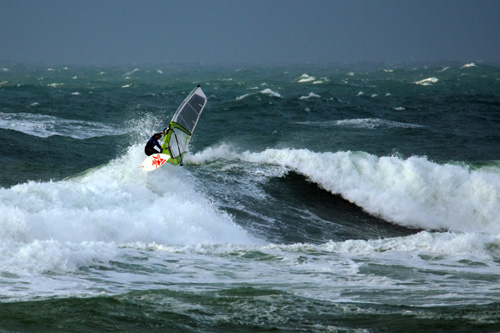 All in all, the event was again a huge success. Plans for next year are already underway, and word is that the organiser will do everything possible to make the contest’s 10th anniversary extra-special. For more details about this world-class beach, and to view full galleries of the event, check out the website at: