Freezing cold, rain showers, and squally 20-30knt winds… it sounds like a contest in the UK but it felt pretty far from the BSA when 1000 slalom competitors all hit the start line together for the first 40km race of 2010 Defi Wind contest in Guissan earlier this afternoon.

I’m out here with Tris Best and Roger Clark as part of Team OTC for the 10th anniversary of the world’s largest slalom race. Suffice to say, it’s been absolutely firing on all cylinders since the word go. The wind today was only forecast to be eight to nine knots and it was howling. The organizers are predicting sunshine and over forty knots of wind for the weekend so the chances are that it’s going to be one hell of a contest with record levels of Ibuprofen consumption.

Sail sizes today ranged from 5.5 to 8.0 metres. We were all on 7.0’s and totally stacked. The atmosphere on the water was absolutely amazing with competitors having travelled from the four corners of the world to take part. It’s was also pretty intimidating and disorientating with so many sails on the water. The start line was over a mile long and they still only barely fitted everyone in.

The main upset today was the wind direction. With most of the pros usually starting at the pin end, a wind shift around to the west left over half the feet having to tack to make the first mark. After that though it was business as usual with most competitors sailing as close to the beach as possible in order to take advantage of the super flat water. The speeds that some guys were reaching on the water were absolutely ridiculous and I saw quite a few guys dismantle their kit into the component parts when their fins got too close to the sand banks.

We’re not sure of today’s final results yet but there’s plenty of big names here in the pack including Anders Bringdal, Patrice Belbeoch, Andrea Cucchi, and Julian Quintel. I’m pretty sure that they were all in around the front somewhere (a long way from me).

Off to bed now for a very early night. Think it’s going to be a long contest… www.otc-windsurf.com

And here’s the official press release…

Défi Wind : 1 000 windsurfers on a unique event in the world

The first start of this tenth edition of the Defi Wind has been given today in exceptional windy conditions. At 15:25, under a 20 to 25 knots tramontane (local North West wind) 1 000 competitors have crossed the starting line of the first round. The winner today is Pierre Mortefon, a young French rider from Fanatic/North who made his first steps into the PWA World Cup last year, who managed to undertake this incredible nautical marathon of 40 miles in less than 40 minutes.

After two very quiet editions with no wind, the Tramontane has finally accepted to honour Gruissan and its windsurfers, with more than 25 knots today. Pierre Mortefon, attending his ninth Défi Wind, signed today his best performance ever on the event. Back to the beach, Pierre explained: “The race went really fast. It was very windy and it picked-up really quickly! It is incredible to be on the water with 999 other windsurfers. Once jibing, when you look at this amazing amount of sails, you realize the situation! I was quite fast on the final round and managed to overtake Bieuzy (Mauffret) who was in the lead from the start!” Bieuzy, who finished second, confided:“I’m a bit disappointed as I was in first position during three quarters of the leg. I was worried about the wind to rise as I had quite big equipment compared to the others. Then Pierre overtook me but I am still very satisfied with my race!” Julien Quentel logically completed this first podium.

Pierre, Bieuzy, Anders Bringdal and 97 other windsurfers are lucky as they are equipped with a tiny jewel of technology: a ‘tracker’ allowing us to know their position and speed in real time through a community platform of geo-localization: MyGeoLive. Thanks to the participation of Microsoft and Dot Vision, the entire world can follow 100 challengers on the website (www.defiwind.com) and on social networks. David Boulanger, co-founder of Dot Vision explains how this extraordinary tool operates and tells us more about the possibilities it offers on such an event. “MyGeoLive is a geo-localization interface working in real time. A GPS module sends data like riders’ position and speed instantly on the web. This year, 100 “trackers” are distributed to several categories of windsurfers: professionals, amateurs, young and elders. Then the replay on the website allows the competitors to compare their ways and speeds.” For sure tonight, many will connect to the Défi Wind website to analyze their course and then challenge the pros during next rounds.

The first day of action at the the 2010 Catalunya PWA Slalom World Cup. http://mpora.com/videos/FtomhAe4i

PWA Catalunya World Cup Event Preview – Pulses will be racing as the PWA’s heaviest hitters prepare to battle it out on the beautiful Bay...

The first day of action at the the 2010 Catalunya PWA Slalom World Cup. http://mpora.com/videos/FtomhAe4i

PWA Catalunya World Cup Event Preview – Pulses will be racing as the PWA’s heaviest hitters prepare to battle it out on the beautiful Bay... 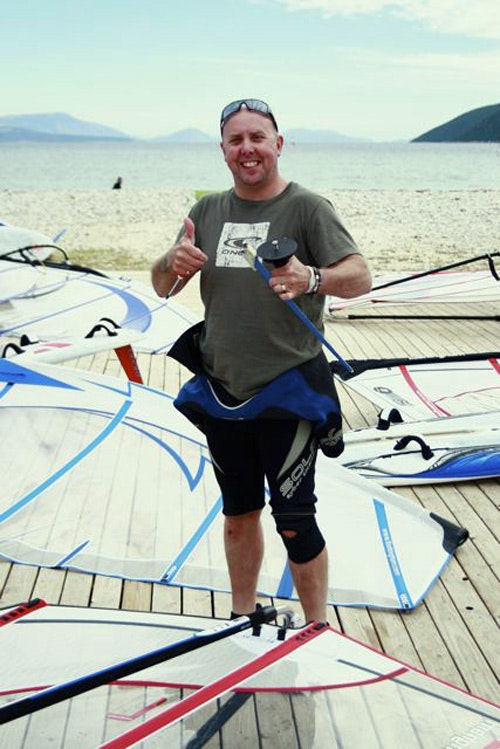 Jay Haysey of Globalshots presents round two of the Club Vass Slalom series… After last week’s fast and furious day of racing at Club Vass,...