When the UKWA fleet arrives at Portland the racers are historically blessed with wind. This year was no exception. Over 100 racers arrived for the CUP 1 series during the May Bank Holiday. The Raceboard Class is growing as champions from other ‘longboard’ classes ( such as Imco, Funboard, even RSX) join the fleet. It is now the hardest fought class with the widest age range of competitors. Tushingham re-entered the Raceboard scene three years ago with the intention of designing a sail that covered the widest spectrum of sailing conditions, allowing racers the opportunity to purchase just one class size sail, rather than registering different models for varying prevailing conditions. Tushingham have since gained two National Series titles with the XR Race sail, and UKWA CUP 1 event is always an indicator for the year to come.

By the end of day one four sailors had tallied a first position which truly highlights the jostling at the front of the fleet.

On Sunday morning the wind blowing off the Portland breakwater was touching 30 knots, which was certainly going to provide ‘heavyweights’ an advantage. This year the UKWA has allowed the Raceboard class to incorporate weight classes – Lightweight below 80kg, and heavyweight above. Dave Hackford sailing the Tushingham 9.5XR Race and Starboard Phantom was lying 5th after the first day, but with the wind to his favour Dave won the four races on Sunday to take the lead into the final days racing on Monday. Last years champion Mark Kay, revived ‘kid on the block’ Jon White and ‘veteran’ Tom Naylor dominated the front of the fleet on the last day, Dave’s consistency with top results ensured he took both the overall crown and the ‘heavyweight’ title for the Cup event. Jon White, also sailing the Tushingham XR and Phantom won the lightweight division and took 2nd. Mark Kay on Demon and Phantom came third.

“If you haven’t raced, and competitive spirit runs through your veins then try a UKWA event when it comes to your region, The atmosphere is superb, and I have to say that windsurfing around the Olympic course, with Nick Dempsey training in the area is inspirational.” says Dave Hackford, originally from Weymouth. Dave Hackford is also involved in the development of the XR Racing sails with Tushingham’s sail designer, Ken Black.

Jon White’s comment at the end of the exhausting 12 race regatta was “Awesome racing, the best for a long time with everyone being challenged throughout the entire weekend”.

For more on the Tushingham Racing sails visit: www.tushingham.com 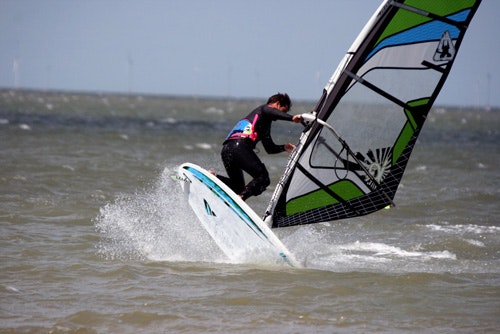 Will Rogers reports from the UKWA Freestyle Round 2 and EFPKT Round 1 at Minnis Bay, Kent – 28-30 May...

Will Rogers reports from the UKWA Freestyle Round 2 and EFPKT Round 1 at Minnis Bay, Kent – 28-30 May...

Our love of great takeaway coffee is costing our environment dearly, with some estimates suggesting that Americans use up to 23 billion paper coffee cups...