Gwithian is possibly the most consistent, true down-the-line wave spot in England. The curving beaches of Hayle Bay offer numerous sailing spots depending on wind direction and swell size. The most common sailed winds are from the South and West. Combined with swell these can give amazing port tack, down-the-line conditions.

The prevailing South-west wind is often funnelled along the Hayle river and streams out at the Bluff. This causes cross-offshore winds making for awesome conditions when the waves are big.

Further along the bay, and to the North lies the fabled Gwithian beach with the  notorious ‘goat trail’ access path. Gwithian picks up a lot more swell than the more sheltered beaches to the south of the Bay. In a Southerly Gwithian will give you cross-off, classic riding days from knee to mast high. Steve and Andy King describe… Godrevy = South to South-west although in these directions it’s easier just to sail Gwithian. It can work well with a high tide and strong North to North-east winds but this is rare.

Gwithian = South to west. South to South-west give great riding whilst West can be good jumping. Gets slightly smaller waves than Godrevy.

Hayle/The Bluff = South-west to west for wave riding through to North-east for jumping or blasting.

(all beaches): If East  to South-east winds head to Carbis Bay or St Ives. However you won’t find waves unless it is massive swell.

Low tide is a long walk out to sucky, dumpy waves breaking close to the shore. Jumping is not so good unless it is huge.

Mid tide is good for all types of sailing with clean wind and well spaced waves that are good for riding and jumping.

High tide is still sailable at most beaches apart from spring tides where access can be limited. Try Hayle or Godrevy. Waves can start backing off until it becomes a shore dump. The wind can be gusty due to land affects.

There are the occasional patches of rocks submerged at high tide at Godrevy, Gwithian and Hayle.
Look out for waves breaking over the scar of reef submerged at most tides to the left of the car park at Gwithian.

An area of reef lays in front of the lifeguard hut at Gwithian and another patch is submerged at high tide between Gwithian and Godrevy.

At Hayle take care of strong currents, shallow sand bars and channel markers in the rivermouth. Access points to all beaches involve some steep and sometimes slippery walks down grass and rock paths. Take care especially when it’s wet or windy. The goat trail at Gwithian has claimed many victims who have under estimated  its powers of ruining kit. Rig on the beach if it’s howling and if in doubt access via the Lifeguard hut at lower tides.

Know the tide times and work out your access and ingress points as these can be cut off by the incoming tide.

Watch out for cliff edges at Gwithian and Hayle.

Surfers, a few kitesurfers and sometimes a jet skiers at Hayle. In the summer these are very popular beaches for tourists. Follow Lifeguard rules and sail in the marked areas and do not go anywhere near swimmers.

Keep your eyes open for seals and dolphins who can be regular water users in the area and brighten up even the lamest of days.

Intermediates to Advanced. Beginners possible on flat days but be aware of strong tides, rips and poor access for heavy kit.

Gwithian experiences full force Atlantic waves on a big day. Get it wrong and expect some severe damage to your kit and a big swim. Know your limits and just head south along the bay to find more suitable conditions if you are at all in doubt. Remember the waves can be a lot bigger than they look from the cliff top.

Always a few local guys and a few regular travellers on a good forecast even in the middle of winter. It rarely gets busy even at weekends because the different level of sailors spread out across the various beaches.

Always a few local guys and a few regular travellers on a good forecast even in the middle of winter. It rarely gets busy even at weekends because the different level of sailors spread out across the various beaches.

Andy Fawcett, Ian Black, Big Danny, Harvey, Blue LDV, the boys from Lodey and regular commuters from Plymouth and surrounding areas. Expect to see these guys ripping whenever it is firing alongside visiting UK Pros and a few travelling Euro’s. Remember, give everybody plenty of space, follow the rules and everybody will be friendly.

There are a few access points to the beach between Gwithian and the Bluff. Seek and you may find the best conditions in some winds and waves but watch your valuables if you leave your cars unattended.

Wait for a big, low pressure to come spinning off the Atlantic bringing strong winds and big waves. As the winds swing from the south to the west move down the bay, from Godrevy to Hayle. If the winds carry on swinging more west/north west then head down to the coast at Marizion for some starboard tack riding and jumping.

There is a Freewave competition held by the UKWA every year at Gwithian over the Easter weekend. Turn up and enter!

Take the M5 to Exeter. From Exeter take the Bodmin Road (A30), keep on to Redruth, then Hayle.

For Godrevy and Gwithian.

At the big roundabout head to Hayle, at the double mini-roundabout head straight across the first then right at the second. Follow the road all the way to the top of the hill.

For Gwithian turn left to Gwithian Towans. Follow the road over the speed humps until you get to the car park opposite the Café.

For Godrevy keep on going through Gwithian village and then turn left after a small hump-back bridge. Turn left into the National Trust car park.

For The Bluff head straight over the mini-roundabouts towards Hayle centre. Turn right after a park and playground (on the right) towards the Bluff. Follow this road all the way until you reach The Bluff Inn.

Carbis Bay is accessed from the St Ives road. 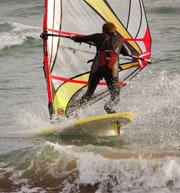 Whitsands Bay is one of those beaches that rarely gets any windsurfing visitors. Why? Well, there is only one good access to the beach on... 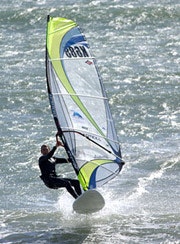 Marazion is famous for its view of St Michaels Mount, right on the South West spar of Cornwall. It picks up good swell but at... 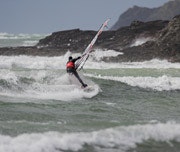 Daymer Bay is the jewel in the Cornish crown of windsurfing. It can provide flat water for blasters, speed demons, freestylers AND onshore & offshore...

Whitsands Bay is one of those beaches that rarely gets any windsurfing visitors. Why? Well, there is only one good access to the beach on...

Marazion is famous for its view of St Michaels Mount, right on the South West spar of Cornwall. It picks up good swell but at...

Daymer Bay is the jewel in the Cornish crown of windsurfing. It can provide flat water for blasters, speed demons, freestylers AND onshore & offshore...