Wales has some of the best windsurfing spots in the UK. With rugged coastlines and sandy beaches exposed to Irish Sea swells, there are surprisingly few windsurfers that take up the gauntlet. Deep in North Wales at the end of the Llyn Peninsular we find one of the best beach breaks around: Hells Mouth. Hells Mouth was originally given the name by the sailing fraternity for it’s treacherous waters some time ago in the days of pirates, cannon balls and fair maidens. More recently it has a reputation amongst windsurfing folk as seriously gnarly, but a classic spot in right conditions.

Probably the most consistent surfing break in North Wales with several peaks along the 7 kilometre beach, it is also set amongst some stunning Welsh scenery. In a good swell the waves can get up to mast high, and if the wind is cross offshore from the NW or the SE, then you will have a very nice (or scary) time. Hells Mouth is a Beachseeker location that is worth bolting down the hatches and planning a trip for.

A strong south west wind and swell brings the waves, but the wind needs to swing round to North or Northwest for good port tack wave riding. When this happens Hells Mouth can be epic with fast waves and excellent down the line conditions.

Gale force South West will be onshore and dumping, an impossiblity to get out. It is OK in this direction if small.

Incoming tide is best, letting the waves pick up considerably.

Sand and the odd fossil.

It’s a wide open beach, only the waves can cause some problems. Give way to the surfers in the many line up’s.

Advanced to expert. It is a punchy beach break so requires some skill to get out if there is some swell around.

Expect a good rinsing from time to time.

West Coast Surf in nearby Abersoch, provide instruction during the summer in Abersoch Bay. Tel.01758 713067 or email [email protected]

This is a quiet windsurfing break. You may meet the odd local but mostly the beach will be yours. Abersoch itself however has got a reasonable surf scene all year round and a lively sailing scene in the summer months.

This is a quiet windsurfing break. You may meet the odd local but mostly the beach will be yours. Abersoch itself however has got a reasonable surf scene all year round and a lively sailing scene in the summer months.

There are plenty of campsites, hostels, self catering chalets and hostels.

Farrell O’Shea’s clothing empire is right here! Also expect to see Ben Proffitt and Phil Horrocks out if they can be torn away from Rhosneigr.

The best wave ride is at the south east end over the rock reef and works best in NW or N winds. Don’t get too close to the cliff because there is a massive wind shadow!

Wakestock is a wakeboarding festival that is held annually in Abersoch every July. It is gaining momentum and turning into a big event. www.wakestock.co.uk

From the M6 take the M56 into North Wales and follow the A55 to Bangor. Turn off onto the A486 and head to Caernarfon. Keep going past Caernarfon until you get to a roundabout that has the option of going down the A499. Take this road to Pwllhelli and then on to the A499 to Abersoch. This is where it gets a little tricky. Follow the one way system round to the right. The lane breaks into two, take the left lane and the left turning. At the end of this short stretch take a left and follow the road and sign posts to Llanengan. Drive straight through the settlement following the road around for about a mile. You will eventually come to a car park on your left that will lead you to the beach.

Clyde Waite and Phil Horrocks, with the aid of Farrell O’Shea. 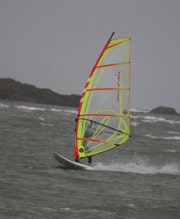 A beautiful beach with clean sand and water although it gets very busy in the summer with tourists. The bay is a very wide bay...

West Shore is a little known beach on the opposite side from the North Shore beach in the tourist town of Llandudno. At high tide...

A beautiful beach with clean sand and water although it gets very busy in the summer with tourists. The bay is a very wide bay...

West Shore is a little known beach on the opposite side from the North Shore beach in the tourist town of Llandudno. At high tide...