Situated right on the very north west tip, this part of Ireland has some of the most unspoilt and beautiful beaches in the whole country.  Sailing here is truly magical, and very much off the beaten track.
Magheroarty is just one of many fantastic beaches on the west coast. It is a big, horse-shoe shaped beach with Ireland’s biggest sand dune at the very end.  The main beach boasts a superb reef break at the top end of the beach, just upwind of the pier.  This reef is suitable for windsurfing or surfing, and in both cases you can launch right off the end of the pier!
On the main beach good waves are almost guaranteed, and the further you go down the beach generally, the bigger the waves get.

South-west to West is port tack, cross-off and cleanest on the reef.  South-west going South works better on the beach break.  North-west is cross-on and offers good jumping.

All of the above wind directions ideally with a West or North-west swell.

South-east or East winds are unlikely to bring waves unless there is still a decent ground swell.

Mid tide on the push

On the beach to the right of the pier is all sand.  The reef to the left of the pier is obviously boulders but they are not the worst and the rip leads you out into flat water.

Just don’t go too far upwind on the reef as at the very top there are some pretty big rocks.  As always make sure your kit is in good nick. Lifeboats and helicopters have been called out before up here to rescue broken-down windsurfers!

Surfers on the reef, and the odd kitesurfer. More likely to see seals and dolphins.

Beginners to Advanced. Beginners go at the top end of beach where the waves are much smaller. If the waves are too much then on a high tide you can head to the inside lagoon for blasting or freestyle.
There are also loads of other beaches for both beginners and advanced, all within half an hour’s drive. For the serious sailor and surfer, try Bloody Foreland.

Just like last month’s article, on a big day, it can feel like ‘survival at sea’ stuff.  If it’s too windy, just wait a while, the weather round here usually changes every few hours.
In a big blow, it is not uncommon to have sets closing out the whole way across the bay to the island offshore. That’s well over a mile so you need to be a pretty confident sailor in these conditions and have a strong mast!

Not at this beach, but back at Marble Hill Windsurfing, near Dungfanaghy run by Richard Harshaw.[email protected] or phone +353 74 36231.

If it’s windy you are likely to find someone to sail with and that will most probably be the ever young Kelly brothers from Letterkenny.

If it’s windy you are likely to find someone to sail with and that will most probably be the ever young Kelly brothers from Letterkenny.

B&B’s, Self Catering cottages & like most of Ireland camping in your van is no problem. Just don’t leave a mess and respect the locals.
Try www.donegalcottageholidays.com or www.donegaldirect.ieand www.goireland.com.

Ben George and the The Kelly brothers (a.k.a Sopranos, Mafioso, ‘da-family’ etc..). They are big guys of Dunkerbeck-esque proportions. It’s no co-incidence that when it’s too cold or flat in Donegal, these guys also hang out at Pozo and are best mates with Bjorn, Vidar and the rest of the Pozo crew.

Go exploring and you will find even more perfect reef breaks and the most un-crowded waves you will ever see.  Even when it is unbelievably windy and big, there are also certain surf breaks that remain completely sheltered and are world class. Go find!

Peter Hart has been running Masterclass Clinics here for years, which probably has something to do with the fine ales on tap, but most likely the great waves on offer.

Fly into Belfast airport and drive to Letterkenny.  From there head west for about 30-40 minutes through Falcarragh and Gortahork and then you will first see the beach.
From Dublin, Letterkenny can be as short as two and a half hours driving through Monaghan and then Northern Ireland. Moo Custom and Simmer team rider Dan Gardner has put together this nice little montage from clips of old and new whilst hitting Ireland’s hardcore... 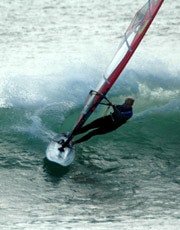 Garretstown beach is approx 35 minutes from Cork City. Situated very close to the Old Head of Kinsale, this stretch of coastline benefits from good...

Not far off being one of the most westerly points in Europe,  Achill Island is a wind and swell magnet.  Watch any weather system that...

Moo Custom and Simmer team rider Dan Gardner has put together this nice little montage from clips of old and new whilst hitting Ireland’s hardcore...

Garretstown beach is approx 35 minutes from Cork City. Situated very close to the Old Head of Kinsale, this stretch of coastline benefits from good...

Not far off being one of the most westerly points in Europe,  Achill Island is a wind and swell magnet.  Watch any weather system that... It looks like Graham Ezzy is storming UK waters. Well near enough UK waters, as we see the BWA stop there each year. He hooks...