This is essentially 2 locations: the Marine Lake and the Dee Estuary. Arguably one of the most reliable venues in the North West, the lake provides coastal wind strengths without needing to wait for the tide so a great after work or school option in summer.
There’s also the infamous wall for speed junkies – the closer the wall the flatter the water and the faster you go if your nerves can take travelling at 35knots with your bum hanging over it!  When the tide’s in there’s some good bump and jump conditions out on the estuary and sometimes waves if you know where to go. The estuary between the shore and Hilbre Island also provides a gentle introduction to sailing on the sea with shallow and relatively flat water for the first 800m or so with very easy launching. The Estuary: Anything from North/North-west to South is OK. South and South/South-west tend to blow you out of the Estuary towards the Irish Sea – beware on the outgoing tide, next stop Isle of Man. West through to South-west is more on shore but not a real problem; with no shore dump and waist-deep water for a good distance out, launching is easy.

Not a wave venue but with a big North-westerly some waves build up further out into the Estuary, particularly beyond Little Eye, and further out to the middle of the Estuary level with the south end of the lake.

Anything with East in it so North/North-east to South/South-east don’t bother.

The Lake: Not tidal except on springs over about 9 metres. These come over the wall and replenish the lake. Sailing around an hour or so either side of these tides on the lake can be a problem as the wall is just submerged and there’s some confused water, so not so good for less confident sailors.

Estuary: Spring tides are best and then high tide is usually 10.30am and 2.00pm. To get out at all you need at least an 8 + metre tide. Less and the sea’s too far away to be worth the walk and you may as well go on the Lake.

Go to: Easy Tide before you set out.

The Lake: It was drained a few years ago – you don’t want to know – wear boots as it is only 4 foot deep.
The Estuary: Mainly sand with mud in the area to the south of the Marine Lake.

Lake: Under 10’s at 20 Knots! Look like adults a long way away then suddenly you realise they’re small people on scaled down kit very close to you! It can get crowded.
The bottom – as stated above, wear boots.

Estuary: See below on wipeout. Also some shallow water/sandbanks when the tide starts to go out – particularly to the north of the lake. Head south as the tide turns, the water’s deeper down there.

Lake: Lots of dinghy racing but mainly confined to south end of the lake.
Estuary: Increasing numbers of kitesurfers, but mainly windsurfers. Lake: Like a big swimming pool so pretty damn safe. If everything goes wrong you can wade/walk back. Great for kids.
Estuary: First 800+m between the shore at the north end of the lake and the islands is pretty OK with shallow flat water at high tide, but watch the rip when it starts to go out. Out beyond the Island there can be waves and it can get a little lonely if things go wrong and then there is a risk of being swept out to sea with the tide.

It can get very busy, even on a Monday lunchtime if there’s been no wind for a while. No real social centre but moves are afoot to re-develop Wirral Sailing Centre. Strong T15 Club with many very keen and able U15’s out on the water.

It can get very busy, even on a Monday lunchtime if there’s been no wind for a while. No real social centre but moves are afoot to re-develop Wirral Sailing Centre. Strong T15 Club with many very keen and able U15’s out on the water.

Many good sailors, particularly freestylers including Darren Mitchell who comes for the flat water and clean wind. Some amazing kids – prepare to be humiliated by a gang of 10 year olds. And, of course, Windy John Sanderson, need we say more!

Stay out in the Estuary longer as the tide starts to go out by using the slipway on the sea side of the south west corner of the marine lake wall.
Look out for the Port channel marker post just off the wall at the south end of the lake – pretty well marks the end of the slipway. The water is deeper down here and you can continue to sail when day trippers are already staring to walk out to the islands at the north end of the lake.
Can be good waves a couple of kilometres out, straight off shore from the slipway.

Speed records have been set here and Carl from Kangaroo Poo has recently re-introduced speed events at the lake.

However you need to knock around 4 knots off the wind speed for the real wind at the lake. Alternatively call the guys in the blue hut on  0151 625 2510.

Take the motorway spur from J2 of the M53 and follow the signs to West Kirby. The Marine Lake is signed.
As you come into West Kirby you come to a T-junction at the top of a hill. Mercedes garage on your left, you turn right down the hill. (Great view coming down the hill) As you enter the town you come to a pelican crossing with the station on your right, take second left after the crossing and follow road straight down to the beach past Morrisons on your left.
At the T-junction turn left and then right onto the car park at the north end of the lake. If you just want to go out on the tide and don’t want to pay the £10 per day lake fee, there’s a pay-and-display just after Morrisons, a short walk from the beach. 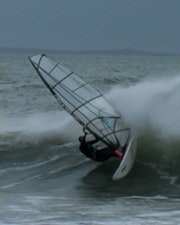 Newgale faces west-south-west and is one of the top locations in Wales for all beach sports. Any good south-west or west swell will generate waves... Sam Ross interviews Kev Greenslade on a new approach to speedsailing… Following an instructor course down at Portland Harbour, Sam Ross catches up with Kevin Greenslade.... 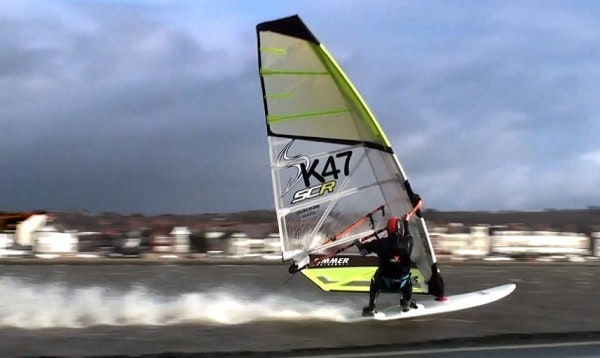 More GPS headlines and 2011 UKWA Windsurfer of the Year, Zara Davies has been out showing why she is worthy of that very title. Pushing...

Newgale faces west-south-west and is one of the top locations in Wales for all beach sports. Any good south-west or west swell will generate waves...

Sam Ross interviews Kev Greenslade on a new approach to speedsailing… Following an instructor course down at Portland Harbour, Sam Ross catches up with Kevin Greenslade....

More GPS headlines and 2011 UKWA Windsurfer of the Year, Zara Davies has been out showing why she is worthy of that very title. Pushing...