Windsurfing is a wonderfully diverse and very accessible sport and there are a multitude of options as to where you can go with it.  Your local conditions and aspirations will determine which way your own windsurfing develops. For instance inland sailors usually favour flat water blasting, coastal sailors tend to edge towards a more manoeuvre orientated style of sailing. By travelling to different venues, working on your technique and selecting the right equipment, within reason, you can do whatever appeals. Whilst windsurfing is a solo sport, there are numerous clubs, events and national associations that offer socials with and racing against other windsurfers. On the professional circuit, a bit like motor racing, there isn’t an overall windsurfing world champion, you get specialists who compete in different disciplines, so there’s separate world titles for wave, freestyle and racing in both men’s and women’s categories.

To give you a better idea of each discipline and where you can take the sport, here’s where windsurfing can take you….

Just because it’s non-planing winds doesn’t mean you can’t get a lot out of your time on the water. Getting out on a larger board with a manageable rig is a great way to use your windsurfing skills cruise about and enjoy your surroundings. Both in the UK and abroad there are endless stretches of water that can be explore by board. Sailing between islands and checking out local lochs, estuaries and harbours is all incredibly rewarding and very feasible on a board. Even if it’s sailing a short distance along the coastline or across the bay to grab a snack before sailing back, you’ll really feel a sense of adventure. Just make sure you check the weather forecast, choose your journey well, take a large volume board for safety and never do it alone.

Train light, sail right! The benefit of getting out in lighter winds on a large board and small sail to practice key hand, foot and rig movements for stronger wind situations is invaluable. You can replicate specific parts of moves and repeat muscle memory skills time and time again. When it’s windy things can happen very fast, so breaking it all down into stages and getting brilliant at the basics enables you to make use of any wind condition and make much more progress than if you only wait for windier conditions. So get on the water, no matter what the wind might be doing, especially if you want to improve!

Check out your local stretch of water and Freeriding is exactly what 95% of recreational windsurfers do. It might be on a lake, reservoir, estuary or coastline, but it’s all about getting out there and enjoying the elements and the rush of windsurfing. It doesn’t matter what level you’re at or the kit you’re using, essentially most people just love to blast back and forth trying turns and having a great time. In lighter winds and flatter water the Freeride kit tends to be higher volume boards and larger sails. As the wind increases and the water roughs up, the kit selection changes to smaller faster Freeride boards, that turn tighter and produce a lot more spray!

The term wave sailor refers to someone who enjoys sailing in rolling swell or breaking waves on the sea. This requires greater windsurfing experience and smaller boards to nip between, along and through the waves. You have to be able to waterstart and sail a sub 100L board to wave sail, but the sensation and thrill of it is incredibly exciting. Most people take at least a year or so before they can venture into this environment. But once you get a taste of jumping, riding and turning on waves, you just want more! There are thousands of recreational wave sailors around the world who rush to the coast the moment there’s a decent wind and wave forecast. At competition level, riders are scored on the difficulty of their manoeuvres and size of the waves they ride. From national circuits to the Profession Windsurfing Associations (PWA) events, the level is incredibly high, with jumps over 30 feet, double loops and ripping it up in incredible conditions. Unsurprisingly, the events are hotly contested by the younger and more fear free windsurfers.

Freestyle originated on long boards with graceful, almost balletic moves. It’s now been taken to extraordinary levels using small boards at high speeds. Whilst you do get some very good recreational freestylers, it’s those who compete or dedicate months and years to learning complex tricks who really impress. Freestyle tricks are now so ridiculously complicated that it’s almost impossible to describe what can be done on a board. There are endless names and combination moves that make up a full repertoire. Freestylers love flat water, so they can spin, rotate and weave body, rig and board in to lightening quick trick sequences. Rarely is the board being used conventionally, they’re usually going backwards, sideways and spinning 360 degrees, often all at the same time. Despite the insane tricks, Freestyle boards are actually very easy to sail, but the top guys use tiny fins to encourage the board to spin sideways, which is what everyone else is trying to avoid. Those with freestyle ambitions need to be incredibly agile, flexible and resilient to knocks and crashes as it takes hundreds and hundreds of attempts to perfect each move. But unlike wave sailing that’s very conditions and location specific, freestyle can be done on any flat water. In fact, the latest craze is to take freestyle to non-windsurfing environments like waterparks, where the riders are towed in behind a jet ski and then released to perform wild tricks in no wind at all!

It’s all about getting from A-B  quickly! Whether it’s just for fun timing yourself on a waterproof GPS or entering a speed event, the concept is to load up and sail as straight and as fast as possible. At competition level, you’re given an average top speed over a 500m straight-line blast. To reduce wetted area and drag, speed boards are very thin and ultra low in volume. But to handle massively powerful camber induced sails, speed sailors tend to be superior in stature and some even wear weight jackets. When you’re trying to lock the board and rig down in up to gale force winds, as you scream across inches from the water, it takes strength, bulk and incredible nerve. Recreationally the average Freerider blasts about at about 25-27 Knots, top speed sailors are regularly doing over 40 Knots. The world windsurfing speed record is held by Antoine Albeau in Saintes Maries del la Me Canal, with an average 49.09 Knots over 500m. That’s 56.49 mph! The water is incredibly hard if you come off at that speed.

If you are the competitive type, then how about some racing? There have been various formats over the years, some replicating triangular yacht racing courses with upwind and downwind legs. Yet the most exciting windsurfing racing is downwind slalom, where races are held in heats over a short course with five or six fast gybes as they zig-zag downwind to the finish. Each race lasts about 2-4 minutes and is very intense with a very high-speed start and tight congested racing at each mark, which is great for spectators when the racing is held close to the shore. Various brands have team riders who use and develop the latest kit, which you can buy and use. But buyer beware, it’s very powerful stuff. It’s not uncommon for racers to be using 7-9m massively powerful sails in the same winds where recreational windsurfers are using 5-6m rigs. To get into racing and other types of events, we’ve listed the various paths you can take through the sport in our Sport Pathway section. Will you ever beat Bjorn Dunckerbeck, He’s the sports most successful competitor ever, with over 32????? world titles! 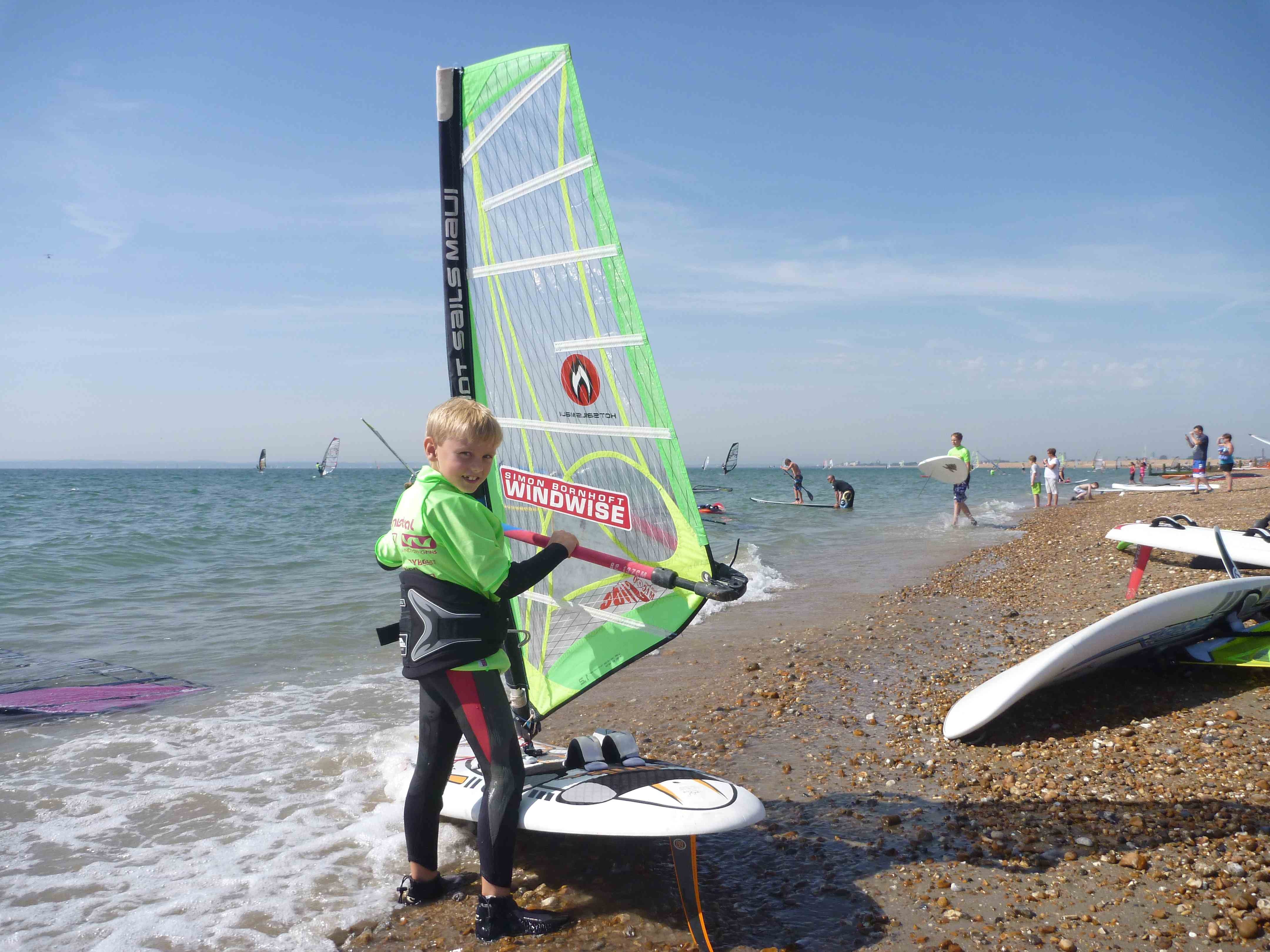 Next up in the NWF series, is Simon Bornhoft, who along with fellow coaches always gives a lot to the event.  Windsurfing History Professional windsurfer for over... It has been a busy summer of windsurfing for all coaches and instructors, in particular the two technique gurus, Jem Hall and Simon Bornhoft. Boards... 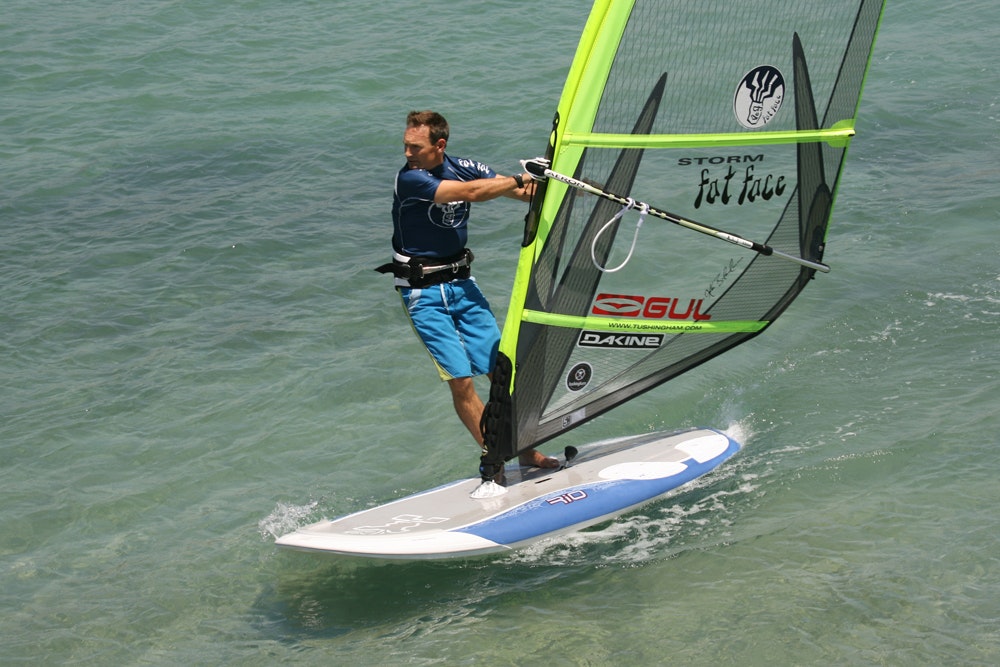 As part of our Basics series Simon Bornhoft now goes through some of the key techniques which speed up your early stages of progression. WIND DIRECTION Your...

Next up in the NWF series, is Simon Bornhoft, who along with fellow coaches always gives a lot to the event.  Windsurfing History Professional windsurfer for over...

It has been a busy summer of windsurfing for all coaches and instructors, in particular the two technique gurus, Jem Hall and Simon Bornhoft. Boards...

As part of our Basics series Simon Bornhoft now goes through some of the key techniques which speed up your early stages of progression. WIND DIRECTION Your... Simon Bornhoft has had another busy coaching weekend, at both Exmouth and Hayling Island.  On a light, sunny barmy weekend, Simon Bornhoft and ten Exmouth windsurfers,...