A new fin is one of the most crucial upgrades you could, and should, be getting for your windsurfing set-up. If you are a speed sailor and want to go faster a new fin could see you hitting faster speeds than ever – but you’ll need to make sure you have the right one!

In the recent 2015 Speed Board Test, Adrian Jones and the Clones used the Type S22 and Type S26.5 Black Project Fins to power them down the West Kirby strip.

Apart from the obvious objective of ‘speed’, what attributes make a good speed fin?

Asymmetric or symmetrical – which is best?

Well, unless you are sailing in a spot where you don’t have to sail upwind the symmetrical is better.

The Type X series is designed for ideal speed sailing conditions and assumes it will be a one-way trip, quite simply it is designed to break records with the X55 designed to average 55 knots with higher peaks.

There is a small performance advantage in that, partly due to the way the board tracks in the water, but they have a very narrow operating range on the opposite tack that makes sailing upwind extremely challenging. The more runs you can get in the higher your average speed will be, and you can get back to the top of the course faster sailing than walking (if it is possible and not a canal like course). For most people the symmetrical Type S will be the perfect choice but if you want to push the limits then you will want to make sure that you have the potential for records.

You have two ranges of speed fins within Black Project, why is this?

Actually we have quite a few, the main ones being the production fins Type S, Type RS, Weedspeed 40 (soon to be joined by the Weedspeed 50), and then the custom ones XLS, SLS and of course the Type X and experimental projects like the Vortex.

They all have different purposes and perform best under different conditions. For example the RS works best in a small slalom board and is a good all-around fin off the wind but still with decent upwind performance.

The Type S is the best rough water speed fin out there, but it benefits greatly from being used with a narrow speed board 50cm wide or less.

It will perform anywhere and helps with board control, feels rock solid, and has amazing top end (this is what Jurjen van der Noord uses for most speed sailing except in a canal).

First you need the right fin for the condition. People of the same ability sailing in the same spot at the same time should in theory use the same type of fin with the size matched to the sail/board they are using.

But, despite the Boards Clone testing, we are all different and hence style, body shape and more can influence the optimal set up to some extent. We are always looking for the perfect harmony where wind, water, board, sail, fin and rider are all in tune. When this is realised we will see some very fast speeds.

Do different styles of fin work better with different boards and rigs, or is a good fin, simply a good fin?

A good fin is a good fin, but everything has to be matched and in balance. So different boards even of the same size might work better with a different size fin, and same goes for sails.

We were using the Type S 22cm fins quite comfortably with 6.4m sails for speed course use, what would be the ideal fin size for 5.5m record breaking conditions?

To be honest the measurement of 22cm is a meaningless number. It tells you nothing about the range of the fin, optimum angle of attack or handling characteristics. The good speed sailors understand this and work hard at knowing their equipment in depth and how to achieve the right balance for the given conditions.

You should at least take into account the area of a fin. As an example for record breaking conditions I would expect Jurjen to be on either the Type X 55 which is 19.3cm deep with 138cm2 or the XLS 46 which is 16.5cm deep with 135cm2 of area. For this reason our Type X range is designated by optimal speed and not by length. If you looking to go 45 knots given a set of variables then you should choice the Type X45, if you are looking at 50 knots then the Type X50 will be your choice, if that makes sense?

Is fin flex important?  And if so, should we be looking for soft or stiff?

It is very important for racing in rough water, but not so much for flat water speed sailing. A little bit of flex is nice but generally pretty stiff is more efficient.

What are the fundamental differences between a speed fin and a slalom fin?

The main difference is the angles sailed. Slalom fins need to work at higher angles of attack where the fin has much more side loading (i.e. closer to the wind). A speed fin works best at very shallow angles of attack where the power is pulling more forwards on a deep, deep reach. Slalom fins also need to work at much slower speeds and have great acceleration.

Most races are won and lost in the gybes so good turning characteristics with good acceleration away from the mark are critical. Speed fins on the other hand are mostly focused on top end speed with good mid-range acceleration.

Now here’s the interesting part – they actually need a much wider operating envelope. In a slalom race most of the time is spent in the mid 20 knots so that is where they are optimized with a range from 15-30 knots. But a speed fin is optimised for the top end, say 45 knots (for most spots/sailors – canals excepted), well you don’t start off there, usually you start from a dead stop. So you have to have a fin that will accelerate you all the way up to that top speed, you cannot do 40 knots if you do not do 30 before. Another challenge to speed fin design is that we are now approaching the speeds that cavitation starts to become an issue. That is why speed fins use thinner foils to try to increase the speed that it becomes a problem. The X and XLS are both cavitation resistant. Let’s just leave it at that, as I could go on for hours and I would just end up confusing you and probably making you bored/annoyed.

Carbon is oh so pretty, at least it is before you use it! If you do not intend to care for your carbon fins like a new born baby get G-10. It is much more durable and will resist those drag inducing scratches. You can do things with twist and flex in a carbon molded fin but that really only applies to much bigger racing fins. I can’t use carbon fins here in Hawaii, I’m always clipping coral heads and grinding on the beach – I’d need a new fin every time I went sailing!

The base of the speed fins are quite short compared to the length of the box, which gives you range for positioning (forward and back within the box when shaping)… how do you decide upon this or do you just mould the fin into the middle of the box and let the board designer worry about that?

The centre of effort of the fins is certainly a consideration, but for most fins this means they end up pretty much in the middle as that is where board designers expect them to be. 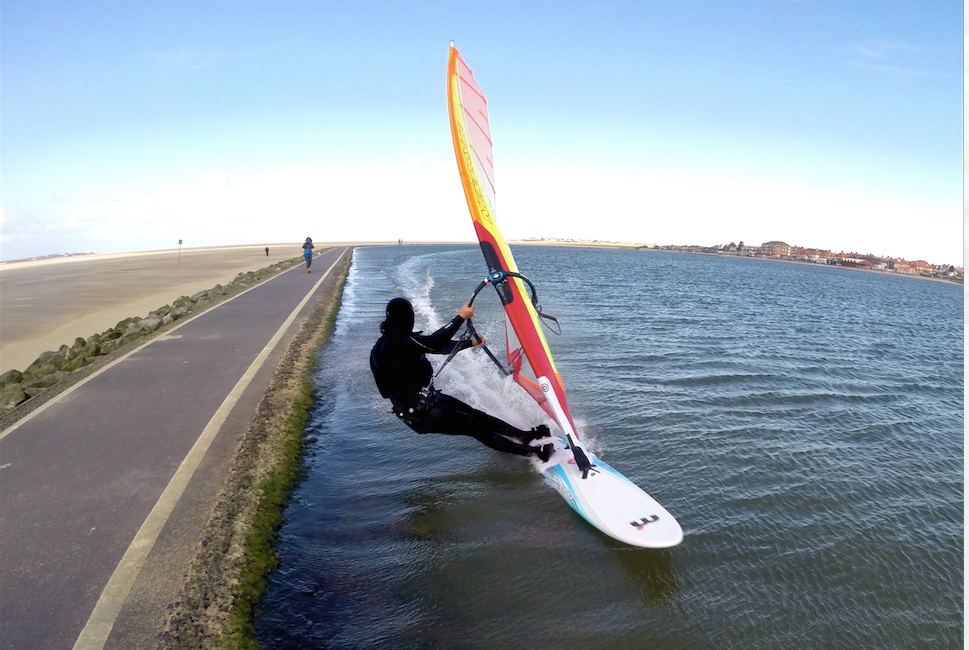 The third board to be tested by Adrian Jones and the Clones, in the 2015 50cm Speed Board Test is the Mistral Speed… MISTRAL SPEED Length – 244...