Slalom racing in the UK is definitely on the up, with a huge number of young windsurfers taking to the discipline and veterans of the sports heading back into competition through the paths of slalom. However, none of this without the top pros of the UK. Simon Pettifer is such a Pro, a familiar face who is at every event always with a smile and happy to help. We took the opportunity of his sponsor change to catch up with him and get a low down of the last event in Weymouth from his eyes.

This year I thought I’d take advantage of transfer season and make a change to my set up, after five very happy years with Simmer style I’m moving on.  I’d like to thank Uncle Faz and the team at simmer and oshea, they’ve been very good to me, and really great fun to be involved with, happy memories team simmer sure know how to party. But after teaming up with K66 and Nik Baker last year on fanatic, it seems to make good sense to use north sails and ION wetsuits too.  Having tried them out I’m super excited about the coming season, the 2016 warps are amazing, powerful, fast and super stable sails. The build quality is awesome as North are renowned and if  that wasn’t enough, the look great! The forecast for the first event of the season was looking ok.. ish, big gear looked to be the order of the day but wind possible on both days. Arriving at Portland harbour on Saturday morning to glorious spring sunshine, things were looking good, some people were already out on the water, looked like maybe 10-15 knots.

Eager to get out and get tuned up for the conditions I rigged up two sails, the North Warp 9.0 and 8.4 excited about the first event of the year on my new equipment.

Bob Ingram from the BWA held the briefing along with running through a few changes to some of the racing rules, the heats were set and every one was ready for the start of the season.

There were quite a few sailors signed up for the event, resulting in unheard of fleet sizes of 14 in heat one and 13 in heat 2, this meant the start and first gybe mark were going to be busy and crucial to having a good race as there would be a ton of dirty wind about. The course was laid for a three buoy, starboard tack start, out in the middle of the harbour and we were called out to race. After the normal cruising about whilst the race crew made sure the course was right, the flag for the pro fleet went up and the count down for the first race began. This made me a little worried as I was having trouble getting to the start boat in the light breeze, all the same I made it and started the race , not the best of starts, i could see James Dinsmore in front of me, along with Tom Wells, Scotty Stallman and Paul Sibley with me struggling along behind, to my relief as we rounded mark 1 only James and Scotty got back onto the plane with rest of the fleet parked up in the dirty wind of the other 11 members of the heat, so the race committee made the decision to bin the race.

In an effort to keep the sailors amused the race crew ran some fun races (unofficial racing which get everyone involved). After this the wind seemed to fade away even more and we were all sent back to the beach whilst we waited for the wind to pick up to a strength suitable for official slalom racing. So we all spent the rest of the day sat in the glorious Portland sunshine, it was a beautiful day…..for sunbathing. The forecast for Sunday wasn’t great but it showed the best possibility for racing would be after lunch about 1 pm. First thing in the morning there was just a light breeze but nowhere near enough to get any races in. Some of the sailors, bored of sitting about went out for a bob about late morning, then a few of the lighter guys started planing on and off, from the beach it looked super patchy and the race crew confirmed this with there being holes all over the course. It looked like we might not get any official racing done. But in true Portland Harbour style the wind slowly filled in with some of the lighter sailors insisting it was windy enough, I must admit it looked patchy to me and Dave White, but then again some of the bigger sailors were now planing more than previously, Kevin Greenslade and Ross Williams seemed more powered up.Then the postponement flag was dropped and we were off out to race. I think it was about 3:30, pretty late in the day but the sponsors (Ross, GA and Tabou and Tris The OTC) were understandably keen to get some races in. To my surprise it was pretty windy, I was well powered on my North Warp 9.0mrunning the Fanatic Falcon 138 on a 48cm F-Hot fin we were ready for the off.

The first heat started I got a good start, only Tom Wells in front and James Dinsmoore down wind of me and maybe just in front, no idea what was going on upwind. So, Tom flew down the first reach with me and James in pursuit. As I was on a broader reach to the mark I managed to sneak past James, Tom did his usual good gybe as did James who came on the inside of me, through a gap I thought I’d closed. The wind was good but because of the large number of sailors in the heat there was a fair amount of pumping to be done to stay on the plane, no one made any mistakes and that’s how the race finished,  only the first 6 from in each heat got through to the finals with the others going into the losers final. Heat 2 finished with Ross and Kevin in the lead closely followed by Sam Latham and Keith Atkinson. The Ams also had their two heats without any hitches and heat 5 was on (The Pro Final).

I decided to mess up my start completely no idea what happened, but I was really late, like 4-5 seconds late, think I was last off the start line. In the lead was Kevin and Ross, I think then James, Sam and Keith were up there too. Luckily for me the first mark was busy and some of the guys went wide avoiding the usual carnage just next to the mark, I saw a gap and with nothing to lose gybed tight. What do you know I took maybe 6 people. In front of me now was Keith and Paul Sibley, Keith had some bad luck and his wetsuit boot came off, so I was able to pass him on the second gybe. Ross was now leading the race followed closely by Kev, James, Sam, Nick Welsh and Paul Sibs, I manged to get past Paul on the last gybe to finish 6th, which given the dreadful start I was happy with. Well done to the winners it was a good final and signified the end of event due to a lack of time.

Thank you to all my sponsors and event organisers, a special thank you to my new collaborates Puravida, Fanatic, North, Ion and F-hot fins. 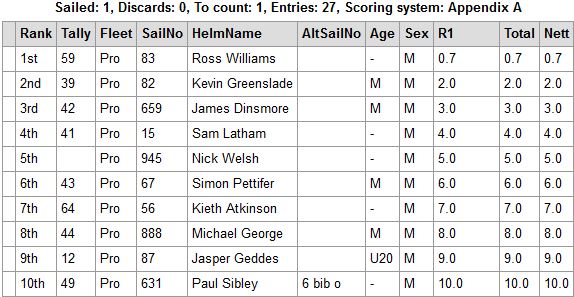