British freestyler, Max Rowe has recently taken part in his first international photo shoot, for Fanatic and North. Max shares the highs, the lows, the out of the ordinary and some information on the new Fanatic freestyle range with Boards.

After being invited to my first ever official photo shoot for Fanatic/ North in Soma Bay, my initial thoughts were of complete excitement and gratitude. As it all got a little bit closer the nerves definitely started to kick in a bit though! I knew all the other riders going, so it wasn’t that making me nervous, it was more just realisation of the massive opportunity I’d been presented with!

I was leaving to go to Egypt straight from an extremely hectic week at the PWA event in Austria.

After being so nervous upon arriving, I was instantly relaxed by the chilled out vibe around the dinner table. Although the obvious point of the trip was to get the shots and footage we needed, I could already tell it was going to be a great bonding trip for the whole team.

After sailing the first day it was pretty clear that the wind was going to disappear for the following few days. We made the most of this time to go all out on some seriously entertaining lifestyle shots. The casino shots will show the best story as we’re all in character believing that we are high rollers at a Blackjack table in Vegas! Paskowski was so excited that he’d got his best ever Poker hand but quickly remembered it wasn’t to be.

This was definitely the most entertaining part of the week, we were all dressed up as high rollers but in boardies. It was one of the funniest evenings of the trips. We weren’t actually playing for real but we were getting very into our roles. Gollito was stealing poker chips from Nik and also looking at his cards when his back was turned so there was lots of shouting going on.

Of course as professional athletes the glasses we are drinking from don’t contain whiskey. Instead we opted for the far healthier Jagermeister!!!

As I mentioned before, Andre was possibly the most disappointed by the evening. In the final round he got dealt the best poker hand of his life, fortunately his bluffing skills were too good and before he had the chance to claim his prize everybody had started chucking in their cards as Nik grabbed all the chips for himself.

All in all it was a hard week and we spent a lot of time on the water making sure we had the shots. It’s always a great feeling when you feel you work well with a photographer as it makes everyone’s life so much easier, with Sebastian I knew exactly where he wanted me and I could understand what shot he was trying to get.

Sailing for a shoot couldn’t be more different! Not just doing the same move over and over again, but you really have to listen to the photographer and make sure you’re doing the move exactly where he needs you to be. Also looking at the camera and smiling is the hardest part for me, when I’m freesailing I pull some of the most ridiculous faces during my moves.

It can take a while if the photographer has something specific in mind. The shots that took the longest were the free ride ones when we were doing synchronised lay down gybes. I think Laure and I spent around 45 minutes to get that shot exactly right.

I was mainly using the Skate 99 TE and the Skate 99 SE. We’ve opted for two different shapes in this range for 2013 with the standard edition being aimed more at entry level freestylers. Both of the shapes are amazing! This year again I’ll be ordering the Skate 89 & 99 TE boards.

Find out more from Fanatic and North on Boards.

Ant Baker shares a further report from Aberdovey, where the racing really was down to the wire.  Aberdovey, Wales is for me the furthest BSA destination... 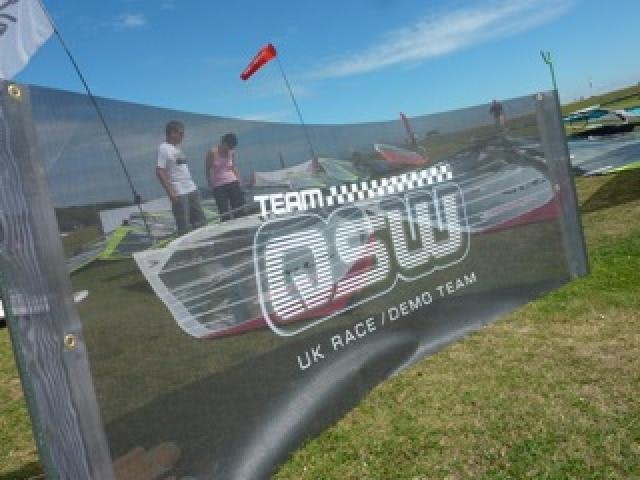 Windsurf the Wash is the first on forecast demo to hit British shores. Run by Quayside Windsurfers, the team will have a huge range of...

Ant Baker shares a further report from Aberdovey, where the racing really was down to the wire.  Aberdovey, Wales is for me the furthest BSA destination...

Windsurf the Wash is the first on forecast demo to hit British shores. Run by Quayside Windsurfers, the team will have a huge range of... X-Train are currently hiring more instructors for the summer season, to work at their tuition centre based at West Wittering beach. Simon Bassett tells Boards...