Perhaps one of the finest videos ever to come out of Brazil, it looks like BlackLab film producer Josh Willmot has pulled out all the stops with this epic cut. With such high pressures to produce, and edit, a video with some of the world’s finest freestylers in and possible one of the most defining film producers in our sport, Josh seized the opportunity and pieced together this cracking clip…

It takes a lot of skill and an artistic brain to simply put each shot captured in a logical order, but it takes something else to pull it off with such style. We caught up with Josh Willmot to find out more about this project. We also managed to grab the UK star in this clip, Max Rowe for a short interview. His style and skill have certainly stepped up to a new personal level, will we see a UK sailor break back into the PWA top 8. Watch the video and read the interviews to decide for yourself.

Boards – So you are certainly at the forefront when it comes to pushing the level on the UK scene and you are showing strong international potential. Do you feel your goals may have changed for the coming season?
Max – My goals will  be the same as the last year which was to fully focus on the PWA and to do the best I can. I got my first ever top 10 finish last year so it would be great if I could make that more of a regular occurrence.

Boards – The video was created by Josh again, on a personal note what are your thoughts?
Max – Josh has done an amazing job and I’m really pleased with it. I only really started to think about this project when I was already out in Brazil, the amazing fact that Andre was back sailing to a high level again and obviously the ridiculous standard of Gollito was the main inspiration for the clip. I hope Andre likes it and for sure he’s going to be hard to impress as after all he’s the one that started doing online web clips to the highest level and now of course has moved on to much bigger top end productions.

Boards – It was great to see Andre back in action, how was his sailing and what was the night section all about?
Max – Yeh it was great to have him back out on the water. He picked everything up so quickly again as you would expect end even surprised himself a bit. The inspiration for the flare footage was from the surfing pictures that made the front covers of loads of magazines. Andre had everything set up and put a lot of effort and money to making sure that this would be an exclusive photo story for the magazines. I was just filming on the side as I knew it would be a great show!  This had never been done before with windsurfing so we were a bit anxious about how it was going to turn out, our first fears were either the kit would get burnt or possibly whoever came into close contact with it; which was most likely to be Andre! Luckily on the safety side it all went to plan and it provided some epic action. Unfortunately the pictures didn’t come out quite as planned so Andre gave me the ok to use the footage for this project.

Boards – We heard rumours of Gollito landing 6 new moves in as many days, can you reveal anything that you saw?
Max – Gollito was really on fire out there! The conditions suit him perfect as he loves it when its windy. Some of the newer combinations were loop into shaka/ponch and double flaka into shaka/ponch. The loop into shaka came about as Andre was stood on the beach watching him do the loop into flaka and started shouting at him to try it into shaka and believe it or not within about five goes he landed it. Unfortunately I didn’t capture as much action from Gollito as I’d planned due to another incident involving him sailing up the beach. This happened the day before we had planned to go to the flat water spot together.

Boards – How do you feel your sailing level improved during the trip and was there anything really noteworthy that was missed on camera?
Max – Yeh I definitely feel I got more consistent in some of the bigger moves and it was great to get some of the newer combos dialed such as air funnel into funnel.

Boards – Any funny moments/highlights of the trip and will you be heading back there next year?
Max – Along with the amazing times on the water the other main highlight was us all playing cards together in pousada do Maurizios. These nights escalated quickly into full swing crazy Brazilian parties! Would of been good to capture more lifestyle of us all together. I will head back for sure as I’ve never been anywhere that’s so reliably windy and still such a paradise at the same time!

Boards – What’s your competition plan this season, will you be attending them all; PWA, EFPT, UKWA?
Max – Not all of them unfortunately. I will focus again mainly on the PWA which means putting the UKWA events on the side as there is a reasonable amount of clashes which makes it hard to attend enough to be a contender for the overall UKWA title. As for the EFPT I hope I can get to a few events but with there being 7 events on the PWA calendar it makes it hard to find time for anything else!

Boards – Thanks for the interview, great action, great moves, great edit, any final words?
Max – Thanks for being behind this project and hopefully there are a few more to come in the future! Greetings from a warm and windy Cape Town…

Check the rest on the next page. Ibiraquera is home to the current PWA Wave Champion Kauli Seadi. He loves the place so much he organized a PWA wave event in 2007 here...

Ibiraquera is home to the current PWA Wave Champion Kauli Seadi. He loves the place so much he organized a PWA wave event in 2007 here... 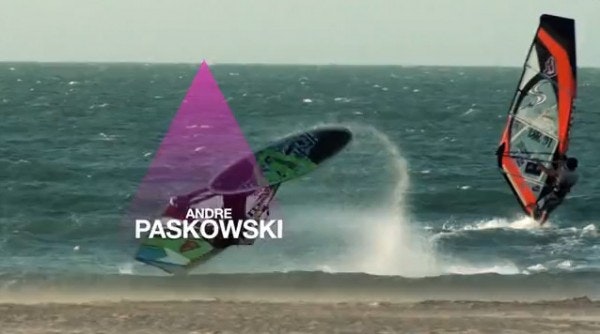 Introducing the exclusive new trailer for Boards.co.uk of three world class freestylers training in Jeri, Brazil. Head back here next week for the full feature....