In June we focussed a lot on speed here on Boards, and through the Big Speed Debate a reader, Rick Hanke, got in touch to explain a lot more about the science of just how fast we could go windsurfing.

So, if you’re ready here’s a full explanation of just how fast we could really go and why…

In order to calculate the performance of a sailboat, a windsurfing board or a kite we have to look on the acting forces and moments and find the conditions where all forces and moments are in equilibrium (Newton’s Law). This condition is a so called steady state of the system which allows us to identify the speed.

The basics in aerodynamics and hydrodynamics allows us to calculate the acting forces and moments under wind conditions, which are well known by theory and practical research on sailboats and yachts for many years.

Looking on a windsurf system we have the aerodynamical sail force producing a heeling moment which is balanced by the sailors weight (Fig. 1). The total sailforce is transferred via the sailors feet to the board. The total sailforce could be divided in a part which is directed into the sailing direction (course), the driving force or thrust of the sail. Then in a force perpendicular to the thrust, the sideforce which must be balanced by the fin. On the other hand we have the hydrodynamical drag force of the board and the fin which are in opposite to the thrust. When both are equal the maximum speed is reached, Fig. 2.

Due to body weight

An important result is that the maximal sailforce is absolutely limited by the weight of the sailor, which produces the moment by leaning out to balance the heeling moment.

Considering typical body geometries it comes out that the max sailforce is about 35-40% of the weight of the sailor.

That means that under all conditions of speed, wind strength and sail size the maximum sailforce could never be greater, it is simply constant. Otherwise the sailor would catapult.

Due to apparent wind angle

Well known is when sailing at a specific course and a given amount of wind that the apparent wind angle will be reduced with increasing sailing speed, Fig. 4. This effect could be counteracted to some amount by increasing the course angle (going downwind) and by sailing under stronger wind conditions, which will increase the apparent wind angle at a given sailing speed.

The sailforce component in the sailing direction (thrust) depends directly on the apparent wind angle.

The apparent wind angle is a function of the the speed (Vs) to wind (Vt) ratio and the course angle.

This is why for high speed a lot of wind is needed. The stronger the wind the larger the apparent wind angle and the larger the thrust. But the thrust reduction with speed is an inevitable physical effect which could not be changed and which is valid for all vessels moving under wind conditions on the water, land, snow or ice.

The thrust and sideforce versus speed for a constant sail force is shown in Fig. 5. The thrust reduces with speed whilst the sideforces increases with speed.

Hydrodynamical drag of the board

Planing has a drag behaviour which is nearly constant versus speed. Planing drag is at first directly proportional to the total weight of the windsurf system and the angle of attack of the board independent of speed and wetted area. Secondly we have to add some friction- and spray drag proportional to the wetted surface area which isI proportional to the square of speed. Due to the fact that with increasing speed the board is lifted the wetted surface area is automatically reduced in such a way that just the total weight is balanced. By this the minimum drag is automatically provided at any time.

The maximum speed is reached when the sail thrust and the drag of the board are equal. This is given at the crosspoint of both curves as shown in Fig. 6. The figure makes it evident that higher speeds are possible when the thrust* is increased (curve shiftet upwards) and or the drag is reduced (drag curve shifted downwards). The difference between the thrust force and the drag force divided by the mass of the system represents the acceleration which is naturally zero when the steady speed condition is reached. Further it is shown that at about 66 kts the thrust became zero.

As a result the sailing speed is at first limited by the total sail force limitation due to sailors weight and secondly by the apparent wind angle (function of speed, wind force and course), which reduces the thrust with increasing speed.

All this could be calculated relative easily and it comes out that the present world record of about 52 kts is just what we can get under consideration of typical sailor weight, sail size, fin size and wind conditions.

Fig. 7 shows the calculation of how fast we can go (Vs) at a course of 140 deg. downwind as a function of windspeed (Vt).

Also if there are some uncertaincies due to estimated data the tendencies or relations are valid and allows us to to draw the right conclusions.

It turns out that the speed relative to the wind speed could be a factor of 2 at low speeds but nears 1 at about 50 kts. That means to go really faster much more wind force is needed. The gradient becomes very flat so that there is no much speed to gain.

For instance to get 60 kts of speed 60 kts of wind is needed.

Where we can find these conditions with flat water?

Who can handle a board under such conditions?

Increased wind speed will rough the sea and will produce additional drag.

How we can go faster?

If we look on the drag distribution of the windsurf components at about 52 kts as it is shown in Fig. 8 we can estimate how much speed we can gain if we could reduce the drag on some components.

For instance reducing the drag of a fin by 10 % gives a total reduction in drag of about 1,1%.

If we could reduce the body drag by 50% gives us an total drag improvement of 5,5%.

Only a small amount of improvements can be reached on existing windsurf boads by avoiding all adverse drag components at the sail by smoothing the sail leading edge, the boom, lines and the sailor itself.

At the board may be the spray drag could be reduced by a specific outline and other edges.

But in general no big steps are possible.

The influence of body weight

This is naturally quite unrealistic…

But we can go faster when we leave the windsurf configuration and use a configuration as it is realized at the Sailrocket II where the heeling moment is not balanced by the sailor but completely balanced by hydrodynamical (foil) and aerodynamical means (horizontal wing) so that the total sailforce could be increased to very high values without any stability problems.

A similar solution (Fig. 9) could be an outrigger mounted on the mast with a planing device or a foil under water in order to provide a moment which at least compensate a part of the heeling moment. In this case much more thrust could be applied and much higher speeds could be reached.

The hope to use hydrofoils in order to get higher speeds is not very realistic.

By using an hydrofoil the foil drag increases with the square of speed. This is a big disadvantage compared to a planing surface where the drag is nearly independent of speed. This effect limits the application of foils for high speed windsurfing either we make them very small. For high speed the foil area have to be drag optimized for the required speed, for 50 kts e.g. it means about 100 cm2 in area. But how you can lift with such a small area at lower speeds? Further the strut for the foil has to be really thick in order to provide the necessary stability which gives a lot of drag.

Controlling a hydrofoil is very difficult especially the altitude control is really a big problem which needs an automatic device to hold it constant and to avoid that the board touches the water surface. It would be desastrous.

Who is willing and able to balance on a unstable hydrofoil at over 50 kts?

As a result for existing windsurf boards, much more speed could not be reached due to physical limitations mentioned above. Only little improvements at better conditions are possible: more wind, more flat water.

Who can find and can sail it will be the new world record holder.

All that what was mentioned above is also valid for a kite. A kiter can hold much more force because the moment arms of the heeling moment are different but the aerodynamic efficiency of a kite is much more worse (more drag) than that of a windsurfing sail.

That’s why the kite record is only just a little faster than the windsurfing record. 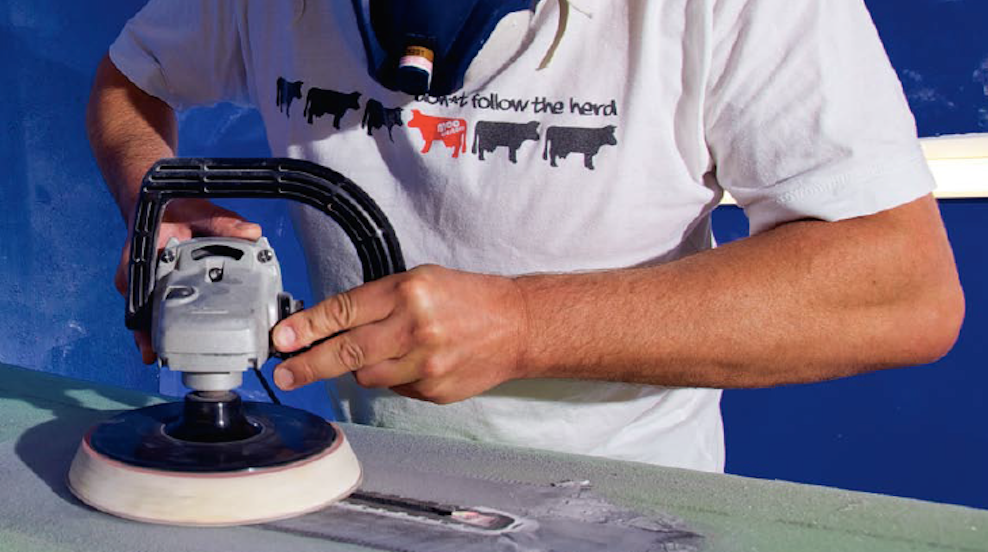 Back in 2012 Steve Thorp smashed 50 knots and West Kirby – the holy grail for many a speedsailor. Here is the story of just... 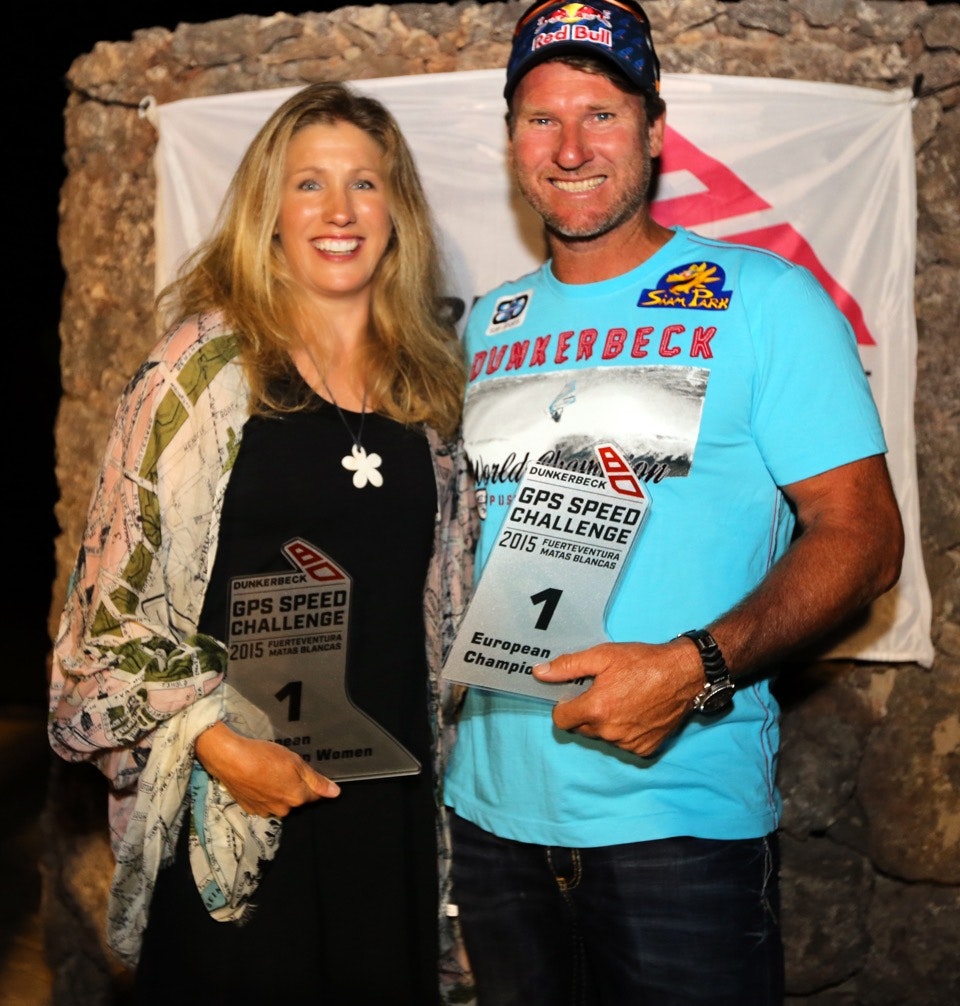 Massive congratulations to Zara Davis who has won the ISWC European Speed title, yet again! And, the UK’s John Skye also managed to rack up...

Back in 2012 Steve Thorp smashed 50 knots and West Kirby – the holy grail for many a speedsailor. Here is the story of just...

Massive congratulations to Zara Davis who has won the ISWC European Speed title, yet again! And, the UK’s John Skye also managed to rack up...