In this instalment of his comprehensive series examining every aspect of wavesailing, Jem Hall looks to ignite your forward loops with the one-handed variation…

ou should all be revved up for some bigger, better and cleaner forwards now, but let’s not stop there, for as a wise man once said: “The only limits placed on you are the limits you place on yourself”. The one-handed forward is the perfect way to step up your jumps and set a new standard. I still remember my first one. I was sailing off West Wittering back in the ’90s and saw Sarf Coast legend Jon Brooks whipping out one-handed forwards, so I thought “Yeah – I’ll give that a shot”. Phew! The feeling was immense, as when you drop the front hand the rig goes way forward and you rotate fast. This is because you’re not holding back the rotation with your front hand too far forward or your front arm bent.

Since then of course we’ve seen Vidar Jensen claim a few one-handed doubles and many stuntmasters whip out some huge one-handers. This move will also get you concentrating on some of the finer aspects of the leg and arm work that take place as you look to induce a controlled rotation and landing.

One-handed jumps and moves in general just feel so free and provide us with some iconic images, such as Angulo’s one-handed airs or Goya’s one-handed backies, and, of course, Josh Stone’s one hand off (from start to finish) forwards. You are equipped to do this as you have been doing lots of one-handed jumps already! So feel the fear and do it anyway, and you will enjoy this amazing sensation. And yes, you will be needing those long lines to get away from your boom.

Let’s use the formula to kick off and then get down to my pearls of wisdom later.

Who? The one-handed forward is for those of you who can loop off chop and small to big waves and control your rotation while having SOME temporal / spatial awareness as to what is happening. Basically if you’re already forwarding then throw some of these bad boys down – it’s not a move for you pole vaulters.

Why? We must all look to consistently challenge ourselves, as by so doing our sessions will be more memorable and we will be placing ourselves in a learning state that will help us to master many moves. And it’s fun! Yes, it is just that bit scary, but it will also improve your basic forwards, as you have to get that rig across you to avoid those vert pole vaults and land sweetly.

What? You have a few choices as to when to take your hand off (which will be presented later), but essentially it is a good old forward loop where you do the rotation with your front hand off and maybe even land one-handed. Some crazy mothers take the back hand (or both hands) off though. Your rig has to be guided forwards and across with the back arm to ensure you land without over rotating and in a position to sail away cleanly.

Where? In order to learn this move a medium sized ramp that’s not too steep is best. This will give you enough height to get your hand off and rotate in enough time without having to change your wetsuit due to over-rotation. Once you have them the sky’s the limit and you can do it off big waves and small chop as well.

When? You can set up the rotation with both hands on, or do a big jump, drop the front hand and then rotate with both hands back on, but while you’re learning it’s best to get your front hand off as soon as you leave the wave – and, of course, do it early in your sailing session while mentally and physically fresh.

If you’ve been overwhelmed when waterstarting, confused when cornering or dunked when duck gybing, there’s a high chance that you might have been fooled by...

Simon Bornhoft explores the counterintuitive moments in windsurfing… Photos: WindWise / Karen Bornhoft A frustrated gyber once proclaimed that windsurfing was like getting in a... 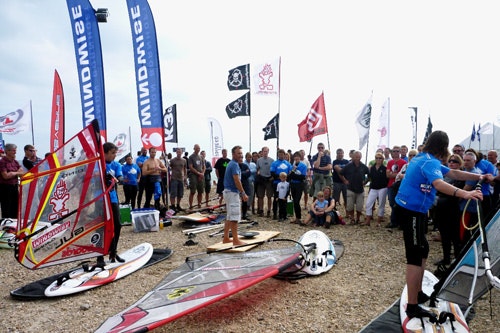 Our technique guru Simon Bornhoft gathered over 30 of his WindWise clients to form Team Windwise and enter the National Windsurfing Festival for the first...

If you’ve been overwhelmed when waterstarting, confused when cornering or dunked when duck gybing, there’s a high chance that you might have been fooled by...

Simon Bornhoft explores the counterintuitive moments in windsurfing… Photos: WindWise / Karen Bornhoft A frustrated gyber once proclaimed that windsurfing was like getting in a...

Our technique guru Simon Bornhoft gathered over 30 of his WindWise clients to form Team Windwise and enter the National Windsurfing Festival for the first...

To finish off his expose on how the windsurfing body works, Simon Bornhoft summarises the key performance enhancing actions for you to try the next...