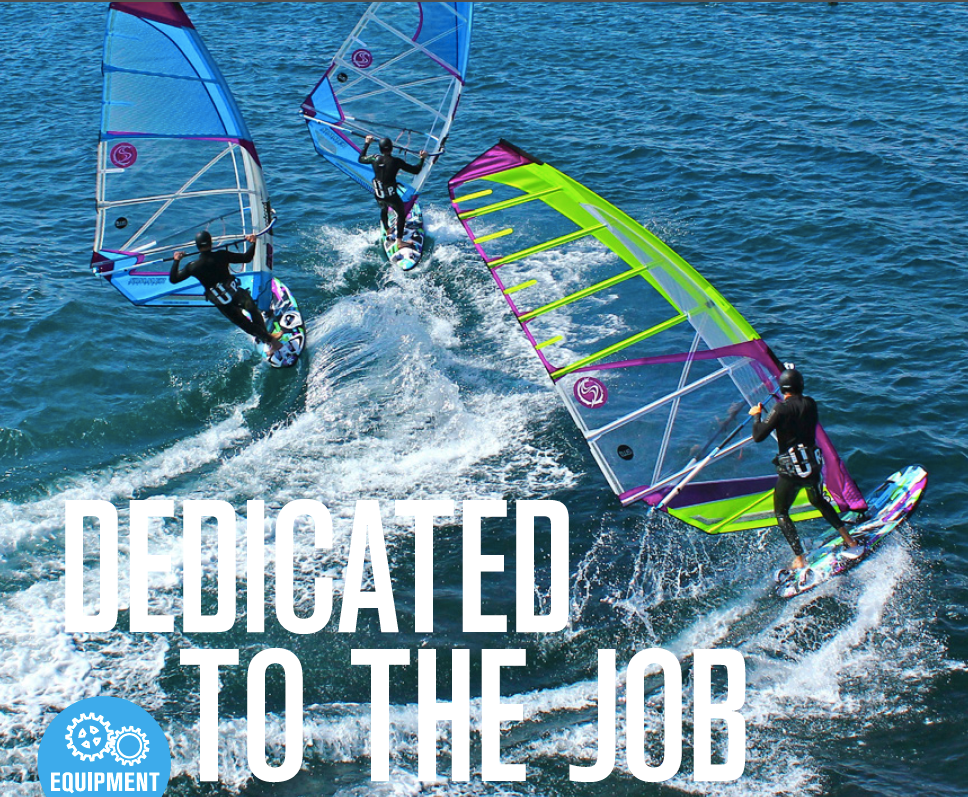 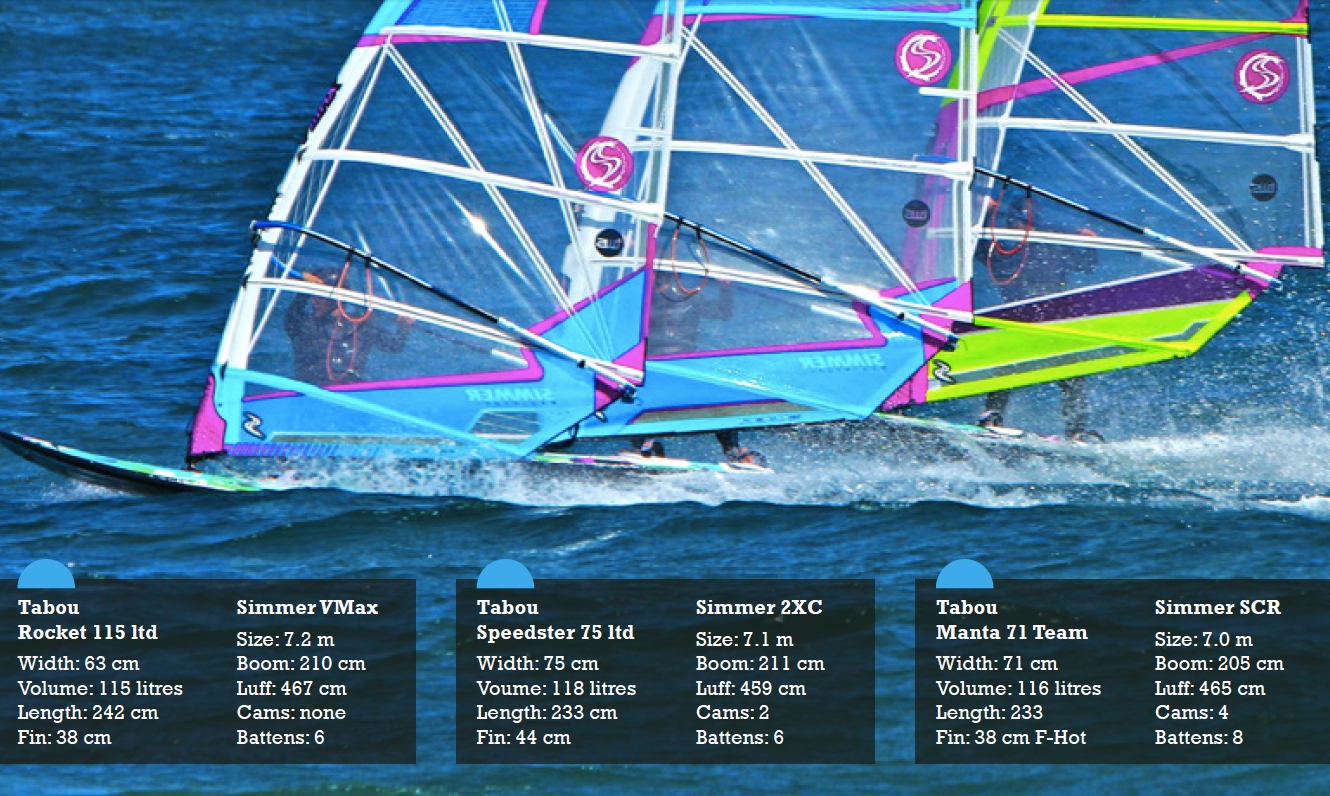 To represent the freeride camp, we have the legendary Tabou Rocket combined with the no-cam Simmer VMax.

Representing the freeracers is the Tabou Speedster paired with the Simmer Twin Cam 2XS and for the race set-up we have PWA racer Ross Williams’s very own Tabou Manta with an F-Hot Carbon fin and Simmer SCR race rig. The booms are all identical 100% carbon North Platinum race booms.

Despite all three boards having approximately the same volume and claiming to all work best with the 7.0 m sail size, it’s amazing just how much bigger the Speedster looks and the width reflects this being a whopping 12 cm wider than the Rocket!

Onto the water and the differences in early planing are not so apparent. Each has its own set of merits and drawbacks. The no-cam rig on the Freeride package delivers arguably the most raw grunt in the hands and helps to lever the board up onto the plane efficiently. Never-the-less, the narrower width of the Rocket and smaller, less powerful fin counteract that advantage; albeit one of the easiest to get planing from a technique point of view. The Speedster has the width and fin size to power it onto the plane and although the twin cam 2XS has less initial grunt than the no-cam VMax, once it gets moving, it’s more efficient to accelerate.

Overall, this Freerace package was the quickest to plane by a small margin.

The Race set-up has the width, powerful fin and fast rockerline to get it planing quickly, but the dedicated cambered rig is both heavier and more rigid in the hands, making it the slowest to power up. As soon as it did get planing however the acceleration was by far the best.

Once up to speed, we found the differences between the three set-ups increased or decreased depending upon the water state. If the water was flat, the difference in top speed was at its most noticeable. The Race gear felt so efficient and although it’s probably the most physically demanding to sail (because of the extra weight of the rig and the fact the board is actually going quicker), it had a very all or nothing character. If you have it fully locked in and pinned down, the kit does most of the work for you and it feels like you are almost skimming across the surface. There is no half measure however on this gear. If you sheet out a bit, the board lifts and you start to have serious control problems. In contrast the Freeride setup is a lot more progressive. You can drive it as hard or easy as you like and the board stays planted on the water and in control. And as you might expect, the Freerace sat somewhere in the middle, although probably leaning a little more towards the race end of things. Whilst the race gear just keeps accelerating on every gust, the Freeride gear, by comparison definitely reaches a top speed – a respectable one, but a top speed never the less.

The relative speed between our clones in flat-water conditions was exactly what you might expect. The Race gear was walking all over the Freeride gear with the Freerace somewhere in between.

As the water roughens however, the differences between them becomes much less apparent, particularly for less skilled riders where control becomes the aim of the game. The Freeride setup is superbly controllable in chop and at full speed our Clones were at times actually faster than the Freerace setup. The Race gear is more a question of bravery because you have to keep it locked down and give it everything. Do that and you will be the quickest still, ease off a bit and you won’t just be caught up, you will also be caught out and are likely to find yourself lying in a heap on top of your boom! To be honest, in the rougher conditions, we really favoured the Freeride setup for everything other than full-on racing use. It is a lot more comfortable and easy going and when conditions get rough, you can give the more dedicated setups a real fright.

Less experienced riders are also going to get a lot more practical speed out of this gear than the more dedicated setups, which in theory are quicker, but you have to have the technique to access this speed, otherwise you will struggle not just for speed, but also for comfort and control.

Where the Freeride gear lacked most was in ‘glide’ through the lulls. A cambered rig is so much more efficient when working off of apparent wind with its rigid profile holding shape, whereas a non-cambered rig starts to ‘deflate’ and lose power.

At the top end, the cambered sails also have an advantage thanks to their extra stability, albeit less manoeuvrability and freedom in the hands to the non-cambered rig.

In the gybes, you would put money on the Freeride gear being the best, and it is, but actually not by a massive margin. The Rocket being slightly narrower and more forgiving in shape, is less demanding of technique for less experienced gybers. However, if you are fairly handy around the corners you might well enjoy the Manta more, because it is a bit more versatile in the arc. The Rocket, kind of sets an arc and keeps to it, whereas the Manta can be cranked harder at will. The extra width of the Speedster did disadvantage it a bit in the gybes, in our opinion. The no-cam sail is obviously the sail of choice in the corners, thanks to its light-weight handling and ease of rotation. The twin-cam is next and the race sail last,  being the heaviest and most difficult to rotate.

So plenty of conclusions, but what does all of this mean? Who should buy what? Well, let me make a case for each setup…

The Freeride set-up is definitely the most applicable and will put a smile on everyone’s face from the novice to the advanced. It planes pretty well thanks to the power in the rig and is the least technique dependant of the three. Meaning that in real terms, you get more performance for less technique. In rougher and choppier sea conditions it can give even the race gear a run for its money and is a lot more comfortable. It loses out a little through the lulls and for ultimate top speed on flat water. To be honest, unless you are hell-bent on going fast on flat water, this is probably the setup you should consider most strongly.

The package we are finding the hardest to make a case for is the Freerace, not because it is irrelevant, but its strengths are its compromise. If you aren’t that skilled, sail in choppier conditions or get as much enjoyment from the gybing as the straights, then you should probably go Freeride, not Freerace.

If you want to go as fast as you can on flat water, then the Race gear obviously has it. Being honest, we didn’t find the Freerace board any easier to gybe than the race model, the only advantage we found was that a less skilled rider would probably be able to access the speed potential a little more easily and with less physical effort. The rig is easier to push a case for, because it’s lighter than the race sail, much easier to waterstart with its smaller luff and more stable and better at planing through the lulls than the no-cam.

The Race gear is exactly what it says on the tin. Fast and scary! You need to be good to get the best from this gear; otherwise you are going to have a seriously bad time on it. But if you are good enough and want to be fast, why would you settle for anything less?

And before I leave it at that, how about this for a thought… why not put the Freerace rig with all the benefits of stability, speed and extra glide through the lulls onto the Freeride board, with its control, comfort and fun factor? Well, we did and to be honest, it was arguably the best and most all-round setup of them all!

Thank you to TWS (Tenerife Windsurf Solution) in El Medano for hosting the test, check out www.twswindsurf.com for more information.