Despite light winds on Saturday, racing began with the advanced riders sailing on the Solent whilst intermediates and beginners sailed in the lagoon. Undeterred by a spontaneous wind shift lull mid way through the races deeming many competitors opting for a tactical self rescue, the championships were soon in full swing.

Sunday brought with it stronger winds and perfect conditions for the university team races. With pride at stake and BUCS points to play for, the relay team racing was even more competitive given the rider’s mixture of abilities and a 20 strong fleet of SWA one design kit (Techno 283 and Tushingham Express 7.5)

The first race was gripping from start to finish.  The students were clearly showing their competitive mentalities with dedication extending to the race up the beach for an entertaining finish. After three races however, the cold wind began to take its toll. It had blown up to 5.5m weather and despite being unable to feel their hands and feet, competitors soldiered on, fuelled largely by a mixture of rivalry, true grit, and copious amounts of Red Bull. A few universities had to drop out of the third and final race due to kit malfunctions. Cardiff University took the title with Cambridge 2nd and Southampton 3rd.

Due to tidal time restraints and a looming presentation, there was little afternoon for a freestyle competition. An impromptu free sailing freestyle jam finished off the afternoon, the cream de la cream strutting their stuff to a huge audience demonstrating the variability within he sport and the intermediates taking advantage of all the 2010 demo kit available.

The BUCS Windsurfing Championships are the finale for a series of ‘core’ events which run throughout the academic year. These core events are organised and hosted by various universities and associated student windsurfing clubs throughout the country. In 2010 the events were held at Cardiff, Bristol and Nottingham at Llandegfedd, Axbridge and Rutland reservoirs.

Formed in 2000, the SWA raises the profile of windsurfing by promoting the sport at universities. There are now in excess of 50 Student Windsurfing clubs throughout the country with approximately 2500 student members.

British Universities & Colleges Sport (BUCS) is the national organisation for higher sport in the UK. It represents 150 universities and colleges and manages the development and competition programme for 50 sports. For more information visit www.bucs.org.uk or join our facebook page at www.facebook.com/bucs

Students, eh? Nearly 300 from universities all over the UK descended on Calshot for their final event of the year, the BUSA National Windsurfing Championships.... 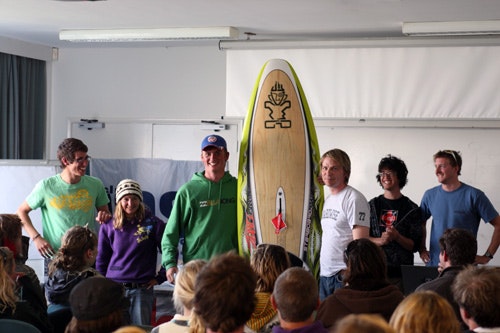 News from the Emerald Isle of their popular annual windsurfing festival… It’s that fun time of year again the WINDSURFING ‘FLEADH’!!!! This year Fingal Sailing School...

Students, eh? Nearly 300 from universities all over the UK descended on Calshot for their final event of the year, the BUSA National Windsurfing Championships....

News from the Emerald Isle of their popular annual windsurfing festival… It’s that fun time of year again the WINDSURFING ‘FLEADH’!!!! This year Fingal Sailing School...