Armed with the latest Tushingham X15 sails and Starboard iSonics, after a long hard battle throughout the week, the team was successful in securing a win with the rest of the Army team against the Royal Navy and thus crowned Inter Service Speed Champions 2010.

With barely a pause for breath, it was straight into the Inter Service Individual and Team Formula Championships, part of the UKWA National Team Championships also held in Portland Harbour.

On the Saturday, in challenging formula conditions of 25+ knots they utilised their X-15 Formula Sails and Starboard Formula boards to great overall effect with their fellow army sailors. With light winds on the Sunday and after 7 races, it was indeed another win for the Army team, also crowned as the National Team winners.

20-year-old Dan showed the fleet a clean pair of heels, putting his past RS-X training to good use by leading the way and was eventually crowned as the Inter Service Formula Champion 2010.

“With such a strong racing community in the armed forces, it is most pleasing to see a fresh face storming ahead of the fleet, especially as he’s using our latest race gear! Impressively, all through Weymouth Speed Week Dan demonstrated real dedication, seeming to clock in more runs than anyone else. With new slalom gear on the way, Dan will be looking to make a big impression on the BSA Slalom Series in 2011.” 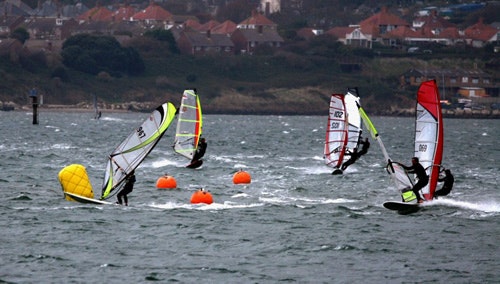 French sailors won the two series of races this Thursday and Julien Quentel takes the edge in the competition held in Flecheiras (EC) Trairi (EC) –...