Philip Köster will be the main man to beat when 43 of the best Wave windsurfers in the world arrive in Klitmøller in Denmark this weekend for the KIA Cold Hawaii PWA World Cup.

Köster, who became the youngest ever PWA Wave world champion last year at the age of 17, already has one hand on the world title after winning the first two of the four event world cup, in Pozo, Gran Canaria and Tenerife. Köster, who retains German nationality through the family, but was born and bred 90 metres from the beach in Vargas, Gran Canaria, has won the last five world cup events and left the rest of the fleet fighting for second place.

The third round of the Professional Windsurfers Association World Cup in Klitmøller, which will run from Monday September 17 to Sunday September 23, will see Köster defend the title he won here last year, but two of his rivals believe the youngster will not have it all his own way.

Victor Fernandez Lopez, the 2010 world champion, is hot on Köster’s heels after finishing second in Pozo and third in Tenerife. He and Klaas Voget, the class German rider, who is tenth overall, will have had almost two more weeks training in Klitmøller than the rest after arriving early last week. Fernandez Lopez, the 28-year-old Spaniard, has form at the Cold Hawaii event too, after finishing second at the inaugural event in 2010 and third last year.

“I’m feeling good after Pozo and Tenerife, two good results for me and I’m here for a week already, so I’ve sailed quite a lot, I love Klitmøller.” Fernandez Lopez says. “I’ve had two great results here, second and a third place and I’m looking forward to doing well again.”

“You have to pass a lot of guys to reach the final spot, but to beat Philip you have to sail perfectly because he sails better in the contests than he does even in free sailing. He sees your move and he tries harder. You have to sail your best heat if you want to have a chance to beat Phillip.”

Klitmøller is recognised by the riders as the perfect venue for the Wave class of windsurfing and is the unofficial capital of this area of North Jutland justly dubbed ‘Cold Hawaii’. “I love this event where you can have more wave riding,” Kauli Seadi, the 2010 winner from Brazil, says. “When we come to Europe most of the events are always too much jumping and not enough wave riding. That’s why they call it Cold Hawaii, because you can actually get some wave riding too.

The tiny fishing village has become a favourite training and holiday destination for European windsurfers and there are few places you can get closer to the stars. Fernandez Lopez and Voget have enjoyed being surrounded by 100 sails on the water as the atmosphere builds.

Many of the competitors come here two or three times a year too. “I think a lot of guys sail well in the north,” Fernandez Lopez says. “Ricardo (Campello, second overall in the world cup last year) was on the podium in the last two years. (Alex) Mussolini (third overall this year) is sailing pretty good and is motivated. Brawzinho (Marcillo Browne) has improved a lot in port tack sailing. Robby Swift, Dany Bruch, all the guys from the Canaries are dangerous because it’s port tack. There are 20 guys who are dangerous.”

But as Voget says: “Philip will be the man to beat for sure. His performances in Pozo and Tenerife were pretty solid and what he put on here last year in the finals was also hard to beat. But we had his conditions last year.”

“The last two years we’ve been really lucky with south-west winds, side shore here, but we can easily get west-north-west winds, which is pretty much on shore and then it is really difficult for all the wave moves and tricks and the jumps as well. In those conditions you can lucky or unlucky and if he (Philip) is unlucky he could lose way before the final. It’s a bit like Sylt, everything can happen when it’s really on shore. The wave takes you down and the current takes you down and you don’t make it upwind in time. If it all comes like that maybe there is a chance for one of us to beat him (Philip) before the final.”

Voget can often be found making the pilgrimage to Klitmøller from his home in Hamburg and is extra keen to leave his mark on this year’s competition after missing out last year when he broke his foot when his board flipped whilst training in Hantsholm four days before the competition. He sees there being lots of competition for Köster.

“Ricardo (Campello) came third last year, Mussolini, he has won Sylt, I’ve been second in Sylt,” Voget says. “John Skye has been top four in Sylt. Kenneth (Danielsen) knows the place like only a few guys do and he’s been improving year after year. Kauli is always a threat when it comes to picking up the waves when it’s stormy and tricky. He probably doesn’t put the biggest jump scores together but he always scores high in his wave riding, he’s really fluid, he always connects the turns.”

“All of the guys in the top ten are able to reach the podium, but they all have to pass Philip.” PWA Sylt kicks off this weekend, with freestyle, wave and slalom fleets all gathering on the German shores and an incredible forecast on the horizon... 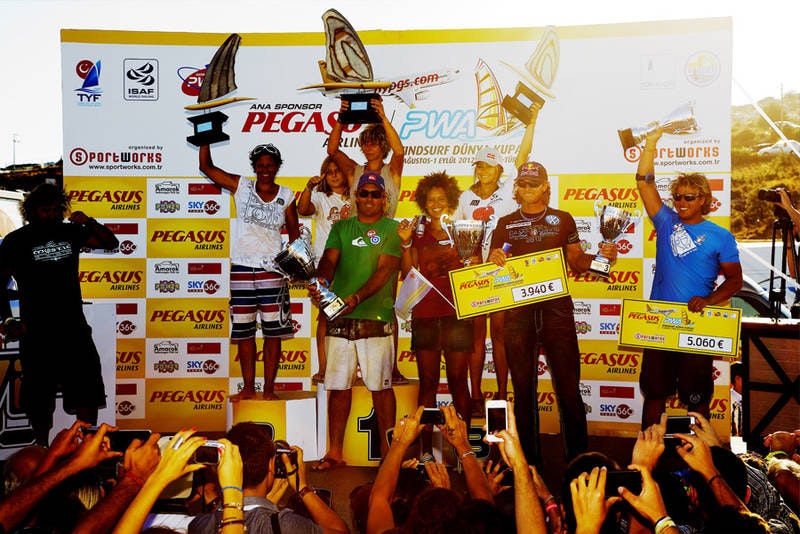 PWA Sylt kicks off this weekend, with freestyle, wave and slalom fleets all gathering on the German shores and an incredible forecast on the horizon...

The next event in the PWA Wave calendar is getting closer and closer, Denmark is ready, are you? http://www.youtube.com/watch?v=8DrTNDMOClw

Pozo and Tenerife both delivered incredible conditions on the PWA Wave tour, next up in the series is Klitmøller, the Danish wavesailing capital.  September 17th to...