Firstly, what size of kit were you using at this year’s PWA events?

Obviously it depends on the event and the conditions. This year for Pozo I had RRD 75 Wave Cult Quad and that was all I used. For Klitmoller I had EVERYTHING, but I only used the RRD 90 Wave Twin in the really light wind heats and the RRD 83 Wave Cult Quad when the wind picked up a bit. For Cape Verde I would have used the RRD 84 Hardcore Quad, but we never actually competed. The whole year I was using the RRD Super Style sails.

How many custom boards do you order per year ?

It depends but normally not too many. This year I ordered a 75 Wave Cult Custom so that I could use it early. The production boards came out quite late, and I wanted to sail the board before the Pozo contest. I also ordered an extra large version of the 84 Hardcore to use in Cape Verde if the wind was very light. It was 91 litres and worked so well that I think they might be putting it in production for next year!

Honestly, how many boards do you break per year?

This year I have not broken any. I think now the boards are getting so much better, that you really have to land badly to break them.

Are quads the way to go or there is still room for tri/twin/single fins?

I am still not 100% decided in really bad conditions. If its good, then for sure the quads are working really well. I think maybe there is a place for the twins in light, onshore, mushy conditions. The RRD Wave Twin is such a good board, that it makes it hard to ever leave it at home!

What are the pros & cons of quads.

Pros. more grip, more drive, better upwind. For me its like all the advantages of a twin in terms of looseness and nice skatey feeling, but with more drive, and grip. Cons. Not sure there are many, but maybe in really light onshore, the extra fins stiffen the board slightly and maybe also add a tiny bit of drag.

What’s the distance between your straps?

On the Wave Cults I have them as far apart as they will go. I think its a stance of 86cm, but I am not 100% about that. On the Hardcores, they have a wider stance, so I have the back strap at the back and the front strap in hole number 2. I think it works out about the same 86cm stance.

What kind of fins do you use at your quads?

I have generally gone a little smaller than recommended with the fins. For example in the RRD 84 Hardcore I put 300 fins in instead of the 350. The same with the 83 Wave Cult. The 75 Wave Cult I use with 300’s except in Pozo where I put 250’s in to loosen it up.

Where did you score the best surf this year?

Morocco was actually really good. We run a Wave Camp there each year in May, and this year we scored some amazing conditions. The best thing was that it was at the end of the week and all the clients were really happy and really tired, so we actually had some time to enjoy the conditions for ourselves.

Give us the 4 best waveriding destinations around the globe per season.

Port tack or starboard tack, what do you prefer?

I used to much prefer starboard tack, but now I would say I am probably slightly better on Port. To be honest I really don’t mind now, I am pretty much equal both sides. I still prefer to ride with wind from the right, as its my natural surfing stance.

Which jump do you consider to be the most technical?

For me at the moment the push loop forward. Its really hard both technically, to stop a rotation and change its direction, and also very hard mentally. I have been trying to try it for a long time now, with not much success.

How many back loops and goiters out of ten are you landing dry on a free sailing session?

Back loops I would hope 9-10 out of 10. It depends on the conditions and how high you are jumping, but I have that move pretty consistent now. Goitas, not so much. I used to have them pretty consistent (7/10), but since hurting my foot 2 years ago, they are not so good now. Its something I will be working on over the winter to get back to at least 5/10!

Who is doing the more stylish top turns at the moment?

Levi Siver has always been one of my favourite guys to watch in riding. Personally I think his style is the best. Thomas Traversa is also amazing to watch, highly underrated and also watch out for Camille Juban. He is young and sailing so well. Lastly, is actually Nayra. Her front side port tack onshore riding is as good as anyones, especially in terms of simple powerful smacks!

Which video editing program are you using?

Final Cut for 99% of everything I do. The program is so good you can do almost anything with it. I still use the old iMovie sometimes if I just want to throw something together and dont really care how it looks.

Are you sure that want to get married?

Yes. very sure. There are very few girls as good as Nayra in the world and to have one that also shares the same passions is too good to be true. Our only arguments are which spot we should surf or sail!

Chris talks to KP about his early years, conversion to Slalom and www.continentseven.com. http://mpora.com/videos/YR0VUidIV

Chris talks to KP about his early years, conversion to Slalom and www.continentseven.com. http://mpora.com/videos/YR0VUidIV 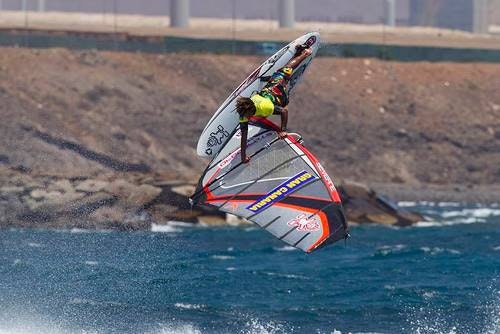 Windsurfing Blogger Zakel Caught up with PWA Wave legend Boujmaa Guilloul to ask him a few questions… Boujmaa, what boards and sails are on top...

Check out this product video for the SimmerStyle Iron 2011 sail range. http://mpora.com/videos/faTedAhQs