The wind was a touch lighter than the first day of the competition with the guys rigging 4.7 – 5.0 for the first rounds of the double.

The swell had also backed off a little from Thursday so heats started at 8 mins with 2 waves only to count and no jumps.

After a few heats the wind and ramps filled in with the upcoming tide. Sailors rigged down and heats were changed to include 1 jump.

Stand out sailors in the men’s are almost too many to mention. Sean Aiken, Skylar, Whit Poor. There is a mix of the old school with the new school battling it out making no heat an easy heat

After day 2 they are left to complete in the semi’s where Goya and Kai are to fight it out; the winner of which will take on Kevin Pritchard in the final Sam Neal managed to hold on for a couple of heats despite slicing his hand open on his fin and Timo managed to break his 2nd mast in 2 days during one of his heats giving him a couple of mins of downtime which led to being knocked out.

The standard of every fleet is incredible – most of the juniors have flown in from Maui; Morgan, Zane Schweitzer, Bernt, the list goes on but they sail almost flawless heats and can quite often give the pro fleet a run for their money. For this reason some of them are actually competing in both categories and doing pretty well.

Day 1 of the juniors saw Zane take the win, but Bernd managed to win the final in day 2. This meant they had to go back out for a head to head as a decider. By this time it was about 7 pm and the wind was easing up, but Zane managed to pull it out the bag to take the win.

The women’s day 2 results leave Ingrid Larouche from the Gorge in 1st thanks to her good jumping and consistent waveriding. Myself (Tanya) in 2nd and Christine Vogt – another Gorge resident in 3rd. Special shout out to Fiona Wylde who is only 13 years old and competing along side the women and doing incredibly well.

As one of the event sponsors Robby Naish turned up as another surprise guest in the largest mobile home we have ever seen (pretty cool and will get a pic today). He was out sailing downwind and putting on an unbelievable display as usual. He has entered the Shadow Box Jump Off so it should be a great show when it happens.

The Gorge Windsurfing Jump Off was a running contest that ran June 28th-July 7th 2010. Competitors scored the best conditions from Swell City to 3...

Competitors rack up points for the Gorge Jump Off. This is a running contest from June 28th to July 7th. This competition is being judged...

The Gorge Windsurfing Jump Off was a running contest that ran June 28th-July 7th 2010. Competitors scored the best conditions from Swell City to 3...

Competitors rack up points for the Gorge Jump Off. This is a running contest from June 28th to July 7th. This competition is being judged... 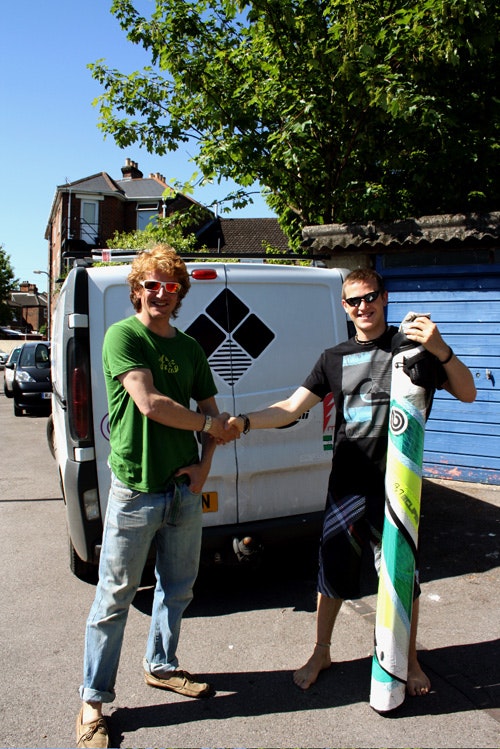 Stef Hilder has won the GOYA SWA wave series. It was a great tour with conditions in Exmouth and Cardiff completely firing! He’s been working...

Kevin Pritchard: The last day of the Pistol River Wave Bash. Goya vs Pritchard in a heated battle. Great event. Thanks to all of the...