The first day of the Catalunya Costa Brava PWA World Cup saw a gentle morning of overcast skies and lights winds, providing enough time for the competitors to gear up and register, ready for the week’s competition. With the skippers meeting at 1pm, and a first possible start at 2pm; the world’s fastest sailors were ready and waiting for the ominous Tramontana wind to kick in.

The first sailors hit the water at 2:15pm, when the rains had passed and the wind switched on, providing 10-15 knots of cross-shore breeze.

From the outset it looked like the major players meant business; the top four seeds all cruising through their first heats and easily qualifying for the quarterfinals.  Gonzalo Costa Hoevel (Fanatic / North Sails) stormed through the start line and around the first gybe mark providing him a huge gap to secure victory. Peter Volwater’s (Fanatic / MauiSails) blistering speed was too much for the rest of the pack, leaving them to wallow around the first mark, and Volwater to cruise to the finish line.

Round two saw the early loss of two event hopefuls; Pascal Toselli (RRD / Gaastra) and Alberto Menegatti (Starboard/ Gaastra), who were too aggressive at the start line and both fell victim to false starts, leading to their disqualification.

Moving into heat 12, the Tramontana wind decided to show what it was really made of, with gusts in excess of 30knots causing havoc on the race course. Still on their big kit, the sailors were well overpowered and often unable to sheet in. Ultimately, it was Josh Angulo (Angulo / Gun Sails / Dakine) who managed to hold his own and fly into the number one spot, securing his place in the semi-finals.

The biggest story from the semi-finals was Bjorn Dunkerbeck (Starboard/ Severn/ Mystic/ Dunkerbeck Eyewear) failing to secure himself a position in the winners final. Falling victim to a crashed gybe at the first mark, a labored water start allowed the other competitors enough time to gain some distance ahead of him. Fuelled by his mistake, Dunkerbeck powered his way round the course in an attempt to catch the rest of the gang, however it was too little too late.

The final saw the return of Antoine Albeau (JP / NeilPryde) who, having played second fiddle to Dunkerbeck for the previous two events, proved that it was his times to shine, claiming the first race in Catalunya.

Moving quickly onto elimination two the sailors were allowed fifteen minutes to change down their equipment to cope with the ever-building wind.  The first heat ran with just two sailors making it to the start line, this carnage continued into heat two causing three of the sailors to miss the start.

Special mention has to go to Volwater and Angulo, both claiming first place positions all the way to the winner’s final. Angulo has been on fine form this season; however he was unable to secure a podium position, Volwater on the other hand just made it claiming third.

Dunkerbeck’s second upset of the day came in the semi-final; it appeared that history was repeating itself as he wiped out at the first mark. Determined to make up lost ground he turn the speed up a notch but was caught out by a rouge piece of chop, sending him flying over the front and his mast snapping with the impact.

In the winner’s final Volwater led at mark one but he was overtaken by Albeau on leg two. Albeau absolutely flew down leg three to open up a massive lead. Volwater looked solid in second but Julian Quentel (RRD / NeilPryde) managed to pip him to the post and beat him by a board length.

Antoine Albeau (JP / NeilPryde), cleaned up in the second elimination sailing the perfect round, securing first place in each heat and a well-earned victory in the winner’s final and securing his second conquest of the day.

Antoine shared with us his thoughts on the days racing.

“I am really happy because I won both eliminations. The wind was really up and down so it was really difficult to choose the right equipment.  In the first final the wind really picked up a lot and I was really over powered on my 7.0, it was way too much. In the second final I managed to choose the right equipment. I didn’t want push the start too much, and it was a battle to get passed Peter Volwater, but once you are in the lead you just go. It was a really good day for me.”

Racing is scheduled to commence at 10.00am local time (UTC +2) tomorrow, following the morning’s skippers meeting at 9.30am.

For information on all the entrants, and to keep up to date with every piece of the action, navigate to www.pwaworldtour.com
Here you can use our:
• Live ticker service for heat-by-heat bulletins
• Check live elimination ladders
• View results
• Read daily news summaries 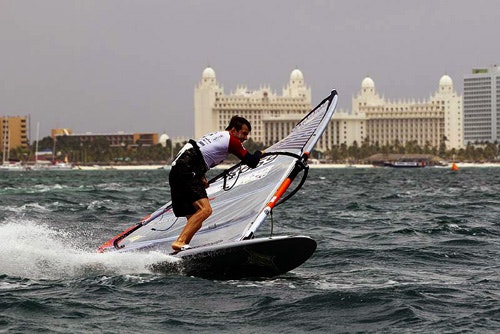