Gollito busts out his best moves to bounce back to the top, whilst Offringa is crowned world champion once again.

The intense week of world-class competition began with the wind refusing to blow on the opening day of competition for the forty-four professional sailors that congregated in Costa Teguise to battle it out at the Lanzarote World Cup.

On day two the bay became a freestyle Mecca allowing the heats to commence in perfect 15-20 knot winds. After a full day on the water the first round had almost drawn to a close, with just the finals left to run.

Day three proved to be a bit of a tease, with only enough wind to finish one heat. But, at least the thirty-five men were one step closer to finishing the single elimination.

On the final day the competitors awoke to a constant breeze allowing the heats to run on time, and the single elimination to draw to a close. By the end of the morning the champions had been crowned, but they had to wait the entire afternoon before they could celebrate. With just enough wind to start the double, Estredo and Offringa endured a nail biting few hours before the competition was eventually cancelled.

From the very beginning the freestyle wonder kid, and ‘Four Dimensions’ star, Estredo held the upper hand on the rest of the fleet. Full of confidence due to previous Lanzarote victories, and with a new move in hand, he seemed unstoppable. Estredo exploded into action in the early rounds taking the scalp of anyone honored enough to sail in his heats, often claiming the holy grail of perfect tens from the judges. When it came to the final, he was well matched with Kiri Thode (Starboard, Gaastra), and many on the shore thought it was the end of his dominance. However, a faultless one-handed regular chachoo – technically the most difficult move in the book – launched the world champ back out in front and towards another victory.

The Queen Of Freestyle

No one ever doubted that the two times freestyle world champion, Sarah-Quita Offringa (Starboard, Vandal) would let her guard down and allow another competitor to pass. The young Aruban flew through her early heats with ease, and claimed her place in the winner’s final after out styling Swiss freestyle flavour, Laure Treboux (Fanatic, North).

However, facing Venezuelan Yoli Freites De Brendt (Fanatic, North) in the final was not such a walk in the park. De Brendt had seriously stepped up her game, and was flying round tricks such as spock 540s and flakas right on cue. The heat was close throughout, but the world champion pulled out all of the stops in the second half, with a switch chachoo, one-handed spock 540, and a flaka diablo, putting to rest any thoughts of De Brendt becoming world champion.

The level of the entire fleet has gone through the roof. The very first heat between Bjorn Saragoza (Starboard, Hot Sails) and Dalvis Parternina Teran (North, Fanatic) might just as well have been a final. They both pulled off technical combination moves that were last year only being landed by the top 3 sailors, and with more style than Gwen Stefani.

Saragoza and Paternina Teran definitely deserve more than a mention. If the double had been able to develop, these two hot shots could easily have caused some upsets. In fact Saragoza already had. He took down the tour leader (at the time) Taty Frans (Starboard, MauiSails) in his second heat of the day. If you’re into your betting, one of these would be worth a punt.

Move Of The Moment

The newest creation from the triple world title holder, Estredo is the matador. It’s basically a back to sail bob, but it looks extremely impressive all the same. Estredo unleashed the new move just before the competition began, which left many heading out in even the lightest of breezes to give it a go, and try to catch up with the master of tricks.

Sailor Of The Week

Apart from Estredo, Thode, and Tonky Frans (F2, Gaastra) who all performed impeccably well with stylish moves throughout their heats, the real tour regular that stood out this week was Canadian, Philip Soltysiak (Starboard, Dakine). He’d clearly been training hard throughout the winter, and it paid dividends in Costa Teguise.

He then moved into a head to head with new kid on the block, Saragoza. Some thought that this would signal the end of Soltysiak’s run of glory, but he landed every move he’s ever learnt, including a triple flaka which he admitted only landing just once before in his life. Needless to say, Soltysiak matched Saragoza and some, to move through into the semi-finals.

Despite a further display of outstanding flipping a sliding, Soltysiak failed to match Thode in the semi’s, which meant he advanced to the loser’s final. This again proved to be a great spectacle, but the Bonairean styler Tonky Frans edged ahead by the narrowest of margins leaving Soltysiak to settle for fourth. Still an awesome result in the toughest fleet in the world.

Estredo’s excellent performance has enabled him to pinch back his perch at the top of the rankings. Kiri’s consistency sees him jump into second. But, a disastrous result here for Taty Frans sees him drop to 9th. However, if all of the events get a result then a discard will be allowed, which means that Taty could still claw his way back. The king of pop, Steven Van Broeckhoven (F2, Gaastra) slips into third.

With only one event this year, the women’s 2010 PWA freestyle world tour has already drawn to a close. Offringa has made it three in a row, and seems unstoppable at the top. De Brendt has stepped up her game, and with it a place in the rankings. And, Treboux’s super stylish sailing sees her fight her way into third.

There’s also a dedicated Spanish event website which can be found at www.lasantasurf.es/costateguise 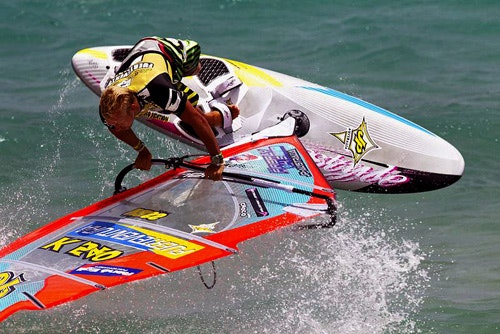 Highlights from the slalom at Fuerteventura 2010 with interviews and racing footage. http://mpora.com/videos/bAekiariy

Freestyle and slalom action from the sixth day of the 2010 Fuerteventura PWA Grand Slam. http://mpora.com/videos/qoTbjTQ4V