Formula and Slalom specialist from down under, Sean O’Brien, will further add to the talent of the Starboard Dream Team on the racecourse in 2011. With a great start of the season, he’s already become the Oceanic and Australian champion for the 5th time at the 2011 Formula Downunder Pro.

The 27 year old from Australia will join Starboard’s elite racing team on the PWA and Formula World Tours in 2011. With his first PWA season in 2010 under his belt, rising star Sean has been able to make some waves on the windsurfing circuit with his skills in video editing and all things digital, with many riders out their recognizing his work behind the lens on some of the popular windsurfing movies doing the rounds online last summer.

Signing Sean was the next step to further increase the media content and videos put out on the web showcasing the Starboard products as well as reinforcing the already strong team Starboard has on the PWA and Formula racing circuits.

“I got my first big break as a 13 year-old kid riding Starboard boards in Australia and working at a shop that sold Starboard whilst I was still at school. I rode Starboard boards for many years until a few years ago, my work and travel took me to different areas out of Starboard’s scope, however I always had a feeling I would one day end up back under the Tiki flag as the brand had given me such a great platform to develop when I was a youngster; and so many years later can offer me such a great platform again to achieve my goals in the sport I love.

In those couple of years riding different brands I found I kept posting on the Starboard forums and answering people’s questions about the Starboard boards; I guess I always felt an affiliation with the brand and how good their products were. In late 2010 I jumped on one of the new iSonics whilst racing in Brasil and I thought to myself that I really needed to be on these boards in 2011. It’s been a while since I’ve been that impressed with any piece of equipment on the first ride.

One of my passion’s outside of windsurfing is shooting film and videos for web, and I’m excited to have a great channel through the Starboard brand to showcase some of my editing skills, so expect to see a lot of cool new videos alongside the great ones Starboard already shoots as well as me blasting down your local sandbank fully maxed on an iSonic or HWR!” 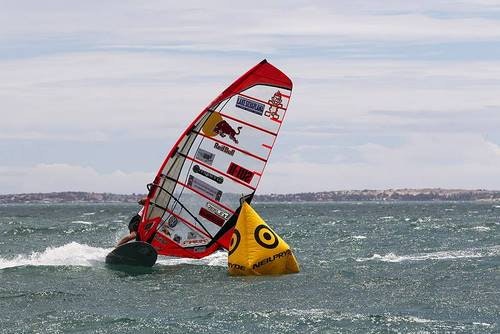 Day 9 – The final day in Vietnam turns up the heat to showcase some of the most nail biting action the world tour has...

Day 8 – Another day on hold sees no further progress for the slalom fleets on competition’s penultimate day. A promising start to competition’s eighth day...

Day 9 – The final day in Vietnam turns up the heat to showcase some of the most nail biting action the world tour has...

Day 8 – Another day on hold sees no further progress for the slalom fleets on competition’s penultimate day. A promising start to competition’s eighth day...

Day 7 – Marginal conditions left the slalom fleet teetering on the edge of competition, but ultimately left the standings unchanged on competition’s seventh day. A...