Now this looks like an office that any windsurfer would love to be part of! Starboard not only allow you what looks like an awesome office life, but as a company they are supporting the environment with their new Starboard for Life programme – and not to forget the extensive range of fantastic boards they make too. Don’t worry, we’ll let you know when any jobs come up! On Sunday May 3rd, at 3.30pm Svein Rasmussen the chief of Starboard, closed the final day of the World Distributors conference by turning off the air-conditioning in the conference room at Cha-am Thailand. It got hot!

Prior to this uncomfortable situation, Svein introduced startegies within his company that would help reduce the Co2 emissions created by the demand of windsurfing and Sup products. Primarily – introducing new pacakging materials used by the Cobra factory, and considerations on reducing the ‘carbon miles’ from manufacturers to supplier. But he had one other far more engaging plan for everyone. Which meant getting up at 6.30am, wearing some knee high black boots and wading into a swamp with a young plant.

Dave Hackford and Scott Warren represented the windsurfing and Sup division of Tushingham Sails ltd, Starboard’s Uk importer. The picture below shows Dave (left) and Scott (right) about to plant in the region of 3,000 mangrove saplings along with 100 other Worldwide representatives. ( The actual area this team covered is near enough everything you see behind the pair – seriously!). The best explanation can be covered by a search on: www.thebluecarbonproject.com

The rapid increase in emissions of Carbon Dioxide into the Earth’s atmosphere is having a severe effect on our climate and nature. Humans claiming more land and destroying vegetation is contributing to rising water levels.

The Starboard conference was held very close to areas where mangrove swamps have been destroyed for fishing, and housing. The mangrove tree happens to absorb 5 times more Co2 compared to many of the rain forest trees, and because their roots are buried in an anoxic soil Co2 is never released back into the environment. 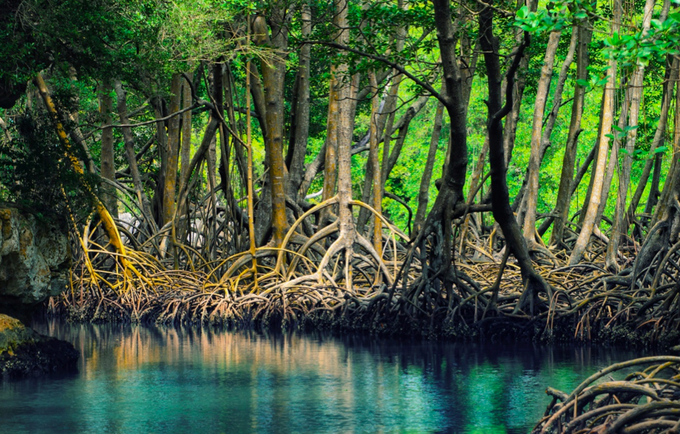 This is not a short term initiative. Svein says his company has now committed to this plantation for 20 years, which is the time it takes for plants to reach full maturity. So every time you buy a Starboard product – a little, just a little of your purchase will help on carbon neutrality. SUP at the Snowdonia Wavegarden

This might not strictly be windsurfing news, but we thought more than a few of you would be excited about Surf Snowdonia – the Wavegarden...

SUP at the Snowdonia Wavegarden